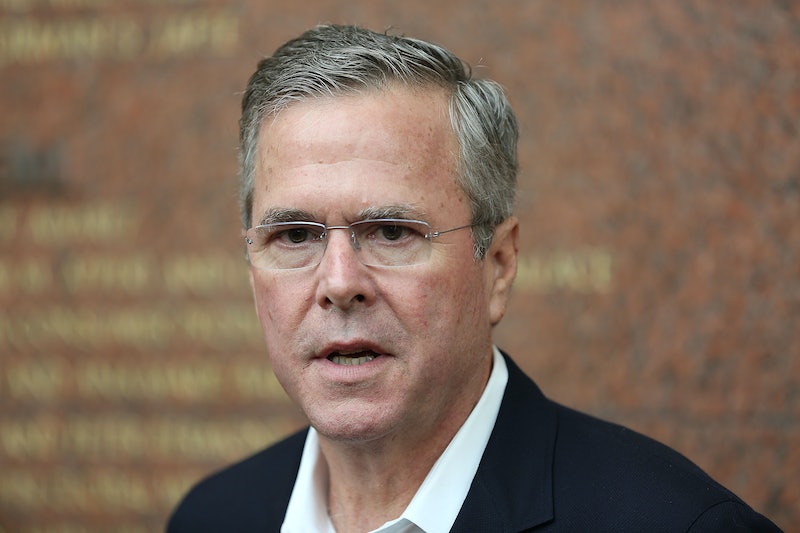 Yet another Republican candidate has thrown their hat into the 2016 election ring. With a presidential race getting more crowded by the minute, candidates are finding it increasingly important to set themselves apart from the pack. Jeb Bush's stance on immigration may be the exact way he can do that. Though Bush has flip-flopped on quite a few issues, immigration included, his thoughts are surprisingly progressive. Bush advocates for reforms that allow the ability to attain legal status at the least. Speaking at the 2015 Iowa Freedom Summit in March, Bush said that illegal immigrants deserve better options than deportation:

Immigrants that are here need to have a path to legalized status. No one I know has a plan to round up illegal immigrants and send them back.

Bush has also stated that he would be open to supporting citizenship, which he has previously advocated for. The only problem, Bush says, is attracting enough support for such a comprehensive reform. Speaking with reporters in New Hampshire in March, Bush said that "If you could get a consensus done, where you could have a bill done and it was 15 years [to achieve citizenship] as the Senate Gang of Eight did, I’d be supportive of that."

Perhaps the most explicit examples of Bush's thoughts on immigration come from the book he co-authored advocating for immigration reform, 2013's Immigration Wars. According to a summary from The Washington Post, Bush is in favor of more work visas and less family visas as well as the possibility of citizenship for children under 18 who may have immigrated to the country illegally with family. Bush also advocates for stricter border control security, which includes adding additional National Guard personnel.

There has been just one drastic instance of Bush completely changing his stance on immigration. According to The Miami Herald, Bush's first gubernatorial campaign had him in favor of deportation. He promptly changed his position after losing to Democratic candidate Lawton Chiles, who was elected Governor of Florida in 1995. Bush was elected governor in 1999 and ultimately left office in 2007 with strong support from the Hispanic community. A Latin American studies major in college, Bush briefly lived in Venezuela and his wife is Mexican. Bush frequently speaks Spanish and English when delivering speeches and did so at a recent appearance at the National Christian Hispanic Leadership Conference in Houston back in April. It is his strong ties to the Hispanic community that ultimately informs his politics.