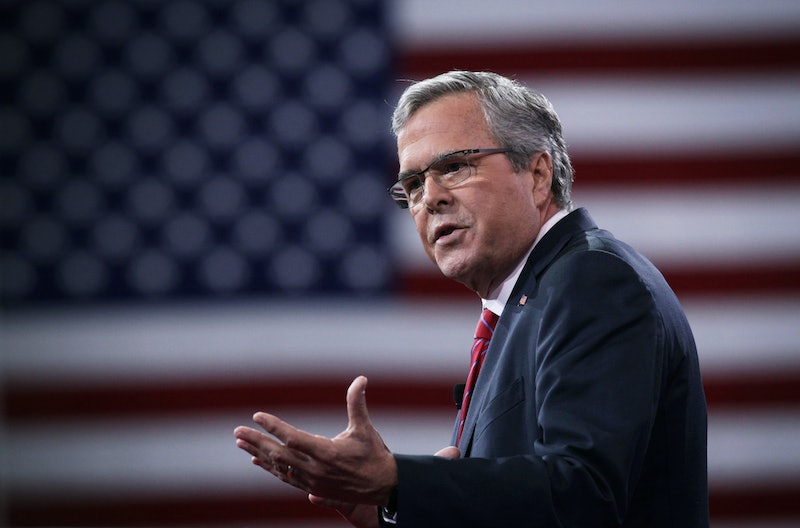 In her first official campaign speech at Roosevelt Island on Saturday, Hillary Clinton called to let the experts handle climate change, saying, "Ask many of these candidates about climate change, one of the defining threats of our time, and they’ll say: 'I'm not a scientist.' Well, then, why don't they start listening to those who are?" She also mentioned the "new voices in the Republican presidential choir," saying that "they're all singing the same old song ... a song called 'Yesterday.'" One of those loudly singing voices belongs to none other than the much-talked-about favorite for the GOP nomination. Jeb Bush's stance on climate change shows he has several skeptical thoughts as to whether the environment is actually in danger of changing at rapidly disturbing rates.

In a 2011 Fox interview, Bush said he thought climate change "might be real" but that it might also partly be a phenomenon pushed by the left-wing party and an issue that is not agreed upon "unanimously by all scientists." He continued by saying Rick Perry, his fellow global warming denier, had "every right to suggest it's not a certainty."

But now, Bush is singing a bit of a different tune in the choir Clinton identified yesterday. In an interview with The Daily Signal, Bush said he didn't deny climate change as a concept. But he still isn't one to admit that nature is doing its own scary thing — he thinks that the level of concern some politicians show might be a "man-made" issue. Bush says those on the left side of the political spectrum are polarizing the topic. "The problem is climate change has been co-opted by the hardcore left, and if you don't march to their beat perfectly, then you're a denier," he said.

In an April interview at the New England Council's "Politics and Eggs" series in Manchester, New Hampshire, Bush addressed another question about his environmental views with a tone that suggested he wasn't altogether convinced of the issue's importance, reports The Hill.

The Florida governor reminded audiences that the U.S. has reduced carbon emissions by relying on natural gas and argued that the country needs to be more focused on "the hollowing out" of its industrial core.

So, it doesn't look like Clinton will have any Republican members crossing over to her choir singing full-throated melodies urging the fight against climate change. Compared to the Democratic opposition, Bush's tune of environmental vigilance might be a little off-pitch.