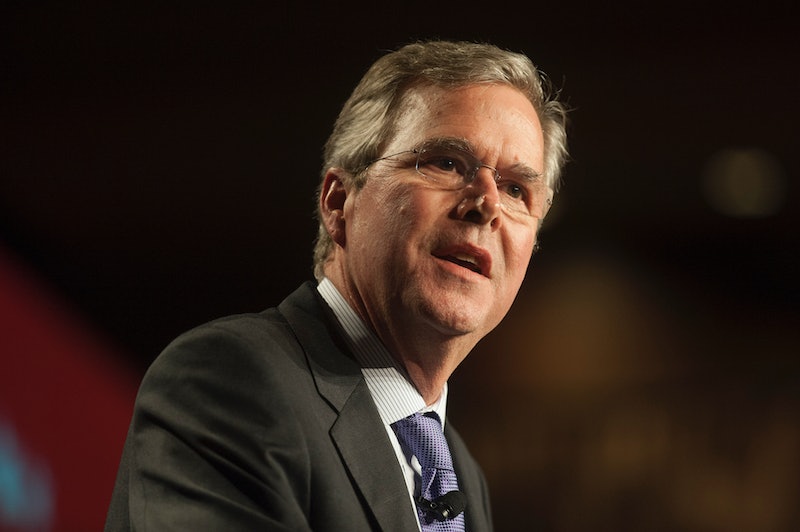 Right now, the United States and Israel have a testy alliance, one that is more born out of necessity than love. The Obama administration's decision to establish an Iranian nuclear deal was met with stark opposition from Israel, which believes Iran's nuclear program is weaponized. Another vocal critic of President Obama's foreign policy in the Middle East is the newest member of the GOP presidential bench: Jeb Bush. Bush is pro-Israel and apparently takes his notes on U.S.-Israel relations from one particular family member.

Soon after Netanyahu netted a fourth term as Israel's prime minister, Bush famously penned an op-ed for the National Review in which he blasted Obama for his "diplomatic scolding" of Israel. Bush described Obama's policy toward Israel as "weak and uncertain" because it "indulges our enemies and attacks our friends," friends being Israel and Netanyahu. In the op-ed, Bush criticized the Obama administration for demanding that Israel make concessions during Israeli-Palestinian talks and extending lukewarm congratulations to Netanyahu on his win.

This is no way to treat an ally. Conducting the foreign policy of a great nation requires maturity and a strategic sense of America’s long-term interests. This is no time for schoolyard antics.

When it comes to the Israel-Palestinian conflict, Bush said in his op-ed that a Palestinian state and Israel could only co-exist if Palestinian leaders delivered on their promises.

In order to produce that, Bush wrote that America needed to be an active leader in securing peace in the Middle East:

The future success of American foreign policy in the Middle East — and the world — will require a fresh approach. One that takes to heart the realities of the region. One that rebuilds the friendships we once enjoyed. One that reminds our enemies of our determination. And one that fundamentally believes that when America leads, the world is more stable and America’s security is more certain.

Some Republicans have wondered whether Bush was right-wing enough when it comes Israel and could deliver the hard-line stance toward Iran they crave. Last month, Bush surprised many when he said his top U.S.-Israel adviser was his brother, George W. Bush. The former president, who has said he will be mostly absent from his brother's campaign trail, was known to be good buddies with Israel while he was in office.

But it wasn't always blind support. During his presidency, George W. Bush oversaw a peace conference between Israeli and Palestinian leaders. He didn't always come to Israel's side during military attacks, such as bombings in Syria in 2007 and an airstrike on Iran in 2008. So if Bush takes cues from his brother, the GOP candidate may actually be less right-wing than he seems. In the end, there could be a third Bush in the White House, and that could bring a familiar Israel policy.