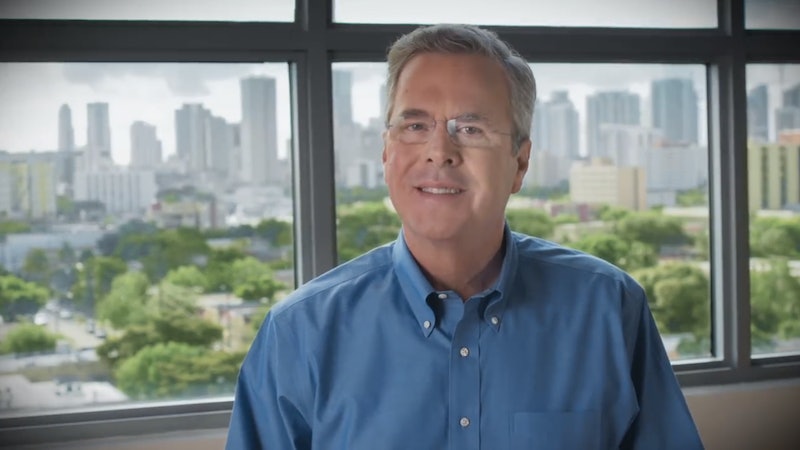 If you haven't heard over the last four, six, eight months — and if you haven't, I envy you, really! — Jeb Bush wants to run for president. I know, it's crazy to even think about: 30 years, three Bushes in the White House — that's one per decade! Perhaps that's the irony behind Jeb Bush's first official campaign video, "Greatest Century," which tries to redefine a new era with a familiar face.

Of course, let's pause to acknowledge that the 21st century in America began 15 years ago with a Bush: George W. He unceremoniously kicked off the century with a contentious election ultimately decided by the Supreme Court and a sliver of votes in Florida, where Jeb Bush was serving as governor throughout the recount mess.

Is this Jeb Bush saying, "A Bush already got this great century started. Why stop now?" Or is he trying to make up for his older brother's past sins?

At this point, I'm not even sure if Jeb Bush knows. The former governor, who's expected to make his long-anticipated announcement Monday afternoon, already looks exhausted in his first campaign video. Sure, it has the high-res sheen of presidential professionalism and an optimistic instrumental score, but he doesn't look so convinced of his own campaign.

That, my friends, is the face of, "What the hell did I just get myself into?"

At least he has the sound bytes. For his inaugural video, Jeb Bush doesn't go after President Obama or the Democratic Party, but Washington politics on a whole — a continuing theme for this batch of presidential candidates.

"The D.C. crowd talks about what's wrong with America. I see what's right," Jeb Bush says in the video. "They talk about problems. I see solutions."

Here's what's right in Jeb Bush's America: children (but only those who are "ready to learn"), "hard-working men and women," immigrants, entrepreneurs. All of that sounds pretty American.

The video doesn't lay out any of the solutions Bush has for America, but he will let you know about his track record as the governor of Florida. There's even pictures involved, to let you know he's credible.

"We grew our economy, and led the nation in job growth," Jeb Bush says.

"[We] defended life," he says, accompanied by a cut to a happy baby. Obviously.

"And protected women from domestic violence," he says. However, he doesn't mention how Florida's Stand Your Ground law, signed by Bush himself, landed Marissa Alexander, a domestic violence victim, in jail for firing a warning shot in self-defense at her abuser. Alexander was initially sentenced to 20 years for firing the single shot, though she was released in January on a plea deal that still puts her under house arrest. For defending herself. Against an abusive intimate partner.

Anyway, here's an image of a somber white woman.

"We reformed schools, and gave every child an opportunity," Jeb Bush says. This is actually a notable point: Bush was able to dramatically improve Florida's national education ranking from one of the worst in the nation to the middle of the pack — and the state's performance in primary education continues to rise. However, Bush accomplished this by implementing some strict standardize testing guidelines and Common Core-esque measures that many GOP presidential candidates are now railing against, so tough luck, Jeb. At least we'll give you kudos for this solid track record.

"We led. We reformed. We got results," Jeb Bush says in the video. "I see a great country on the verge of its greatest century, and I'm ready to lead*."

*Or so he's been told, because who else has emerged as a GOP frontrunner?