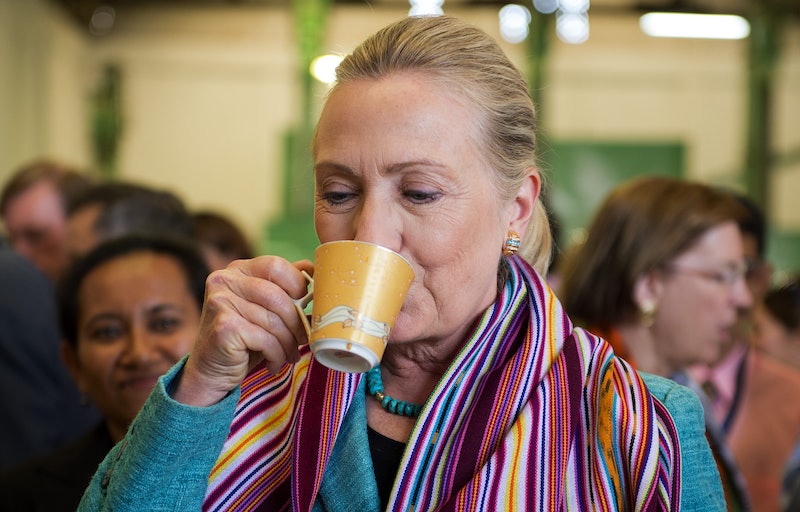 So, you didn't spend your Saturday afternoon giving a killer speech to a crowd of hundreds on Roosevelt Island. That's a given. But as of Monday morning, you do have something in common with Hillary, at least according to Mitt Romney. Remember that face you were making on the way to work before you'd had a chance to leap on the Keurig machine at the office? Well Romney said of Clinton on Morning Joe Monday: "Sometimes, though, when you see [Hillary] on a stage or when she comes into a room full of people, she is smiling with her mouth, but her eyes are saying, 'Where's my latte?'"

I admit that I've doubted Romney in the past, but he's really hit the nail on the head with this one. This morning, and quite possibly every morning, my hair was saying, "I hit my snooze button four times." My mouth was saying, "Hi, is it still raining?" And my eyes were definitively, one hundred percent saying, "Where's my latte?!"

Like it or not, Romney just helped calcify the image that Clinton's team is working hard to maintain: the accomplished everywoman. The Republican Party and all of its many, many 2016 candidates mock Clinton for being out of touch and so wealthy she's lost touch with working-class Americans, but what's more ordinary than feeling like you're going to punch someone until you get your hands on a latte? Additionally, Romney's comment implies that Clinton's trying hard to mask her Monday-morning exhaustion and fight the good fight — for women and gay rights in particular, as her last Instagram reminded us — so, if you read between the lines of this comment, not only is she an accomplished everywoman, she's also won't let the fact that nobody's got her a latte yet stop her.

"It doesn't suggest that she believes everything she's saying," Romney continued on Morning Joe. "I think people wonder: Can they really trust Hillary Clinton?"

Romney's comment isn't grossly unfair. It's a stereotype that Clinton is out of touch with the common people, but as Emailgate and its ensuing hysteria reminded us, many Americans hold an underlying suspicion that there's a great deal Clinton and her team keep under wraps. It's a suspicion that the Republican Party will exploit during every stage of the presidential election, and as the smartest candidates will remind us, it's not entirely unfounded. However. Romney's criticism in itself is nonsensical and dumbed down: Rather than raise any specific reasons Clinton may not be trustworthy, he said something vague about her eyes looking sleepy. Of course her eyes look sleepy. Do you know how insane this woman's schedule is?

Honestly, I wouldn't trust someone who didn't look a bit baffled until they had their first hit of caffeine of the day. If Clinton and her team are covering something up, it probably isn't that they can't figure out where the nearest Starbucks is.