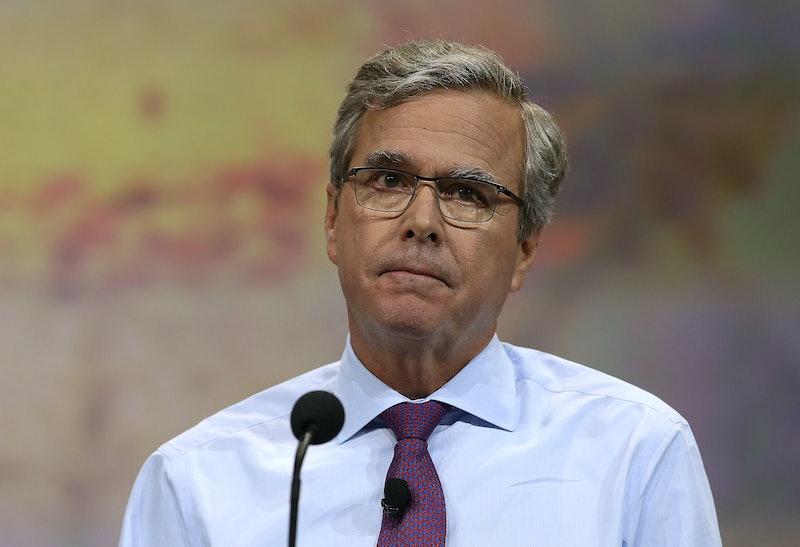 On Monday, former Florida Gov. Jeb Bush will announce his candidacy for the 2016 presidential race — meaning Jeb Bush memes are about to take over your Facebook news feed. While Bush has been a favorite among certain Republican establishment crowds, he still has some obstacles blocking his road to the White House. In an April 2015 poll conducted by Suffolk University and USA Today, results show more Republicans oppose Bush than they support him when it comes to primary election season.

Family relations, of course, might also complicate Jeb Bush’s electability. When asked about a Jeb Bush 2016 election campaign would be possible, Barbara Bush — his own mother — told NBC's Today show in 2013 that “we’ve had enough Bushes.” Although it makes sense for former President George W. Bush to support his younger brother in running for president, the approval and defense given for the elder Bush's failed policies that led to perpetual wars and then-clandestine torture interrogation techniques makes it difficult for Jeb to gain support among American voters.

It was Bush 2.0’s term, after all, that ensured that millennials have lived most of their lives under a time of war. This fact alone prompted one college student to lambast Jeb Bush’s support for the 2003 Iraqi invasion. "Your brother created ISIS," said Ivy Ziedrich, the 19-year-old University of Nevada junior who fact-checked the candidate among a circle of supporters. Of course, Jeb is not George — but it's undeniable that Jeb's campaign will live under the shadow of his brother's rocky presidency.

With Hillary Clinton already campaigning and a possibility of having another Bush in the White House, American voters are becoming flirtatious with an subtle oligarchical framework this election cycle. Here’s some snarky and hilarious memes that highlight how some are feeling about a Jeb Bush presidency.