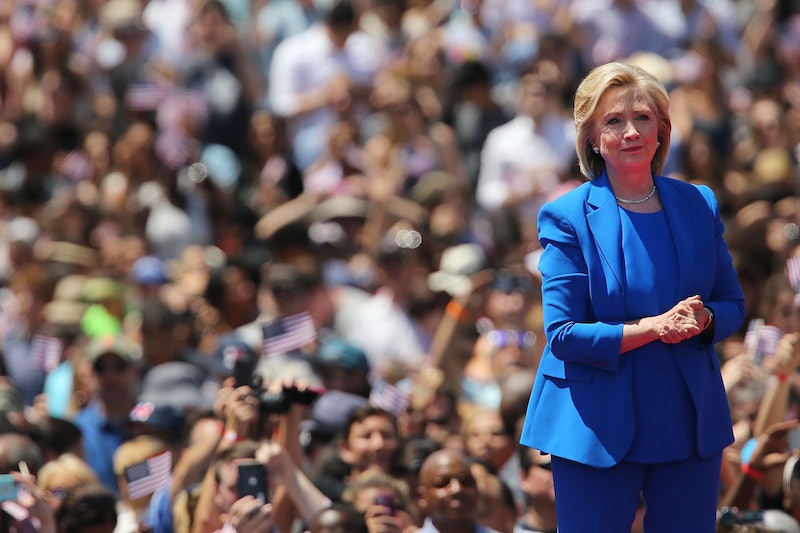 Hillary Clinton's opening campaign rally on Roosevelt Island Saturday focused on her political agendas for gender equality, taking care of veterans, and giving all kids the opportunities to succeed, but some people could only focus on her blue pantsuit. Yes, it's 2015 and female politicians are still having their appearance and clothing choices analyzed by the media and public. Clinton and other women in politics have dealt with sexist comments and criticisms for decades, and the response to Clinton's blue Ralph Lauren pantsuit is all the proof we need that female politicians are still judged by different standards. Even if it's not a negative criticism of her appearance, the simple fact that Clinton's clothing made headlines after a huge political rally reveals how big of a role her gender will play in the 2016 election. Unfortunately, Clinton's appearance makes headlines pretty often.

Of course Clinton looked fabulous in her blue pantsuit, but who cares? The media didn't write about any of the male presidential candidates' suit and tie choices after their announcements and campaign rallies, and Clinton should be treated with the same respect. For some reason, people still tend to care a lot about what Hillary Clinton looks like at any given time.

Here are eight other times Clinton's appearance has made international headlines.

When She Went Makeup Free

In 2012, Clinton decided to step outside without a full face of makeup on, and the media went wild. The then-secretary of state told CNN at the time: "Because you know, if I want to wear my glasses, I'm wearing my glasses. If I want to wear my hair back, I'm pulling my hair back. You know at some point it's just not something that deserves a lot of time and attention."

When She Upgraded Her Scrunchies

While she was serving as secretary of state, Clinton got a lot of flak for wearing scrunchies in her hair, because clearly how she does her hair is more important than her international work. In her memoir Hard Choices, Clinton wrote:

When I began this book, shortly after leaving the State Department, I considered a number of titles. Helpfully, The Washington Post asked its readers to send in suggestions. ... My favorite was "The Scrunchie Chronicles: 112 Countries and It’s Still All about My Hair."

When She Wore A Hair Clip

Back in 2010, Clinton wore a hair clip to a United Nations general assembly, and people were not pleased. Clinton was very accurate when she said: "If I want to knock a story off the front page, I just change my hairstyle."

When She Was Asked About Designers

During a Q&A with students and young people in Kyrgyzstan in 2010, Clinton was asked which clothing designers she prefers. She responded perfectly by saying, "Would you ever ask a man that question?"

When She Was "Confused About Her Gender"

While appearing on Lopez Tonight in 2011, Tim Gunn criticized Clinton's clothing choices, saying: "Why must she dress that way? I think she's confused about her gender [with] all these big, baggy, menswear tailored pantsuits."

When She Decided To Run For President

The Independent claimed in April that Clinton's appearance would play a huge role in her 2016 presidential campaign, saying: "What she wears matters, and matters more than it would for male presidential candidates."

When She Got New Clothes

As the first lady, Clinton's appearance was often scrutinized. In 1994, Clinton changed up her wardrobe and the media was fascinated. The New York Times wrote: "With one dizzying leap, she went from someone who seemed to care nothing about her looks to someone who seemed preoccupied with them."

When She Was On The Cover Of Vogue

In 1998, Clinton graced the cover of Vogue, which led to thousands of headlines all over the world. A few days after the cover came out, Clinton gave a speech at a lunch and The New York Times wrote: "Mrs. Clinton sparked waves of murmurs as she walked into the room with her Vogue makeover."