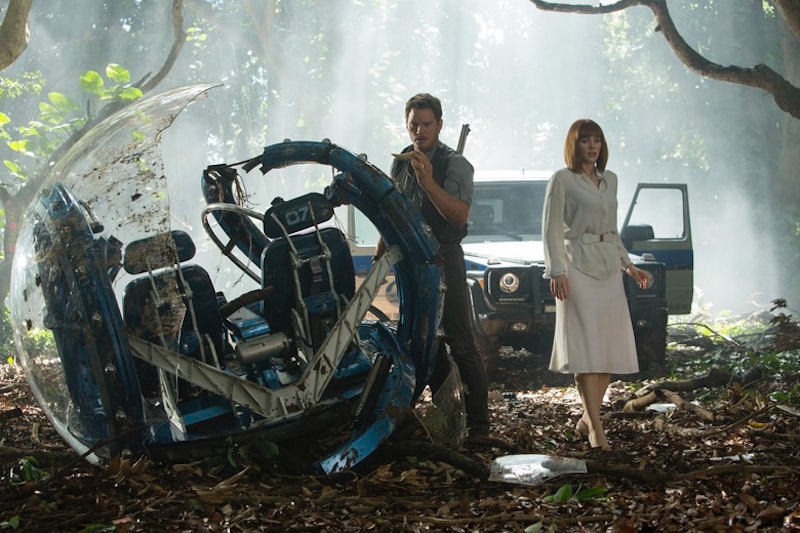 For those of us who have been anxiously awaiting this summer's decade in the making blockbuster release, the unveiling of Jurassic World's leading lady via teasers and trailers sparked great concern regarding whether or not Colin Trevorrow's addition to the Jurassic Park series would be steeped in sexism. After many interviews on the topic, and much speculation, Trevorrow urged viewers to decide for themselves, and having done so (spoiler alert), I have to conclude that while the movie was not entirely sexist, Jurassic World 's Claire Dearing was unbelievably fashionable, in the best sense and the worst.

And, although Bryce Dallas Howard's portrayal of Dearing is admirable (and in some ways, a hat tip to the roll with the punches and take no shit ingenuity of Ripley from Aliens) the costume design supporting her Type-A character traits falls on the fine line between elegantly fitting and feeling like a cop-out, or perhaps, Dearing's Achilles heal.

It is no surprise that Dearing, as head of operations and asset management at Jurassic World, would spend her time in the control room and the lab facilities impeccably dressed — especially when hosting investors. Insofar as her role within the company goes, it follows that she would be greatly concerned with her appearance, and would place herself in a position of power using her wardrobe as a statement.

The stark contrast of her perfectly coiffed hair and white silk skirt suit sets her apart from the unwieldy dinosaurs she's tasked to manage and the control her counterpart Owen Grady (Chris Pratt) mocks her for displaying could be seen a necessary precaution in easing the minds of potential investors. In these ways, Dearing's fashion sense is spot on.

Even the greatest fault we find with Dearing's wardrobe has a sound place initially. Her fantastically pristine pair of patent leather pumps have had many viewers up in arms, but as Trevorrow has said, "It's what she wore to work that day." However, one could argue that in terms of character development, Dearing's Type-A personality is precisely the reason that her maintaining the use of the pumps while visiting off-site locations seems so far fetched. We're lead to believe that she's feisty and perhaps, as Howard puts it, "Every once in a while, a person comes along who says they can run in heels better than they can run in sneakers, and I think that's who this person is."

But women who wear heals, travel to remote locations, and are decidedly Type-A have also been known to adopt a more be prepared attitude, tossing spare flip flops, flats, or boots into the trunks of their SUVs prior to whisking off into the jungle in what could be considered a regular part of their daily routine.

Sure, Dearing didn't necessarily anticipate having to make the drive out to speak with Grady, but being an asset manager, one would assume she was accustomed to off-site visits, and most of us presume (based off of personal experience with heals on uneven surfaces being relatively nightmarish) that she would prefer to do that in comfort and... wait for it... control. Because although some women run better in heals than sneakers, the majority of Type-A planners would far prefer a quick wardrobe change before setting off with their seemingly laid back and adventurous bosses in helicopters, or stashing their vehicle with emergency boots that would enable a quick change prior to jumping out of the car at an off-site bungalow (a scene that could have been just as easily added as the scene in which Grady blatantly addresses the absurdity of Dearing's wardrobe, and Dearing comically and decisively asserts that she's got this).

What's most concerning, in regard to the interplay between Dearing's fashion choices and character development, is the assumption that although we're privy to the fact that she micromanaged her affairs enough to print out an itinerary for the date she and Grady previously shared, it would be far too tedious to show Dearing opting for a change of footwear, or even in the alleged words of Dearing's costume designer, would make her look "too protected."

It is precisely the lack of attention given to the fact that women are often prepared for the eventuality that their fashion forward wardrobe may not be the most suitable for what arises in unforeseen situations that tilts Dearing's character toward less believable. It feels as though yet again, this female protagonist isn't allowed to be multifaceted, as though she must be either fashionable, or practical, not both, and that's a bit difficult to swallow.

Seeing as Jurassic World is not a hard hitting, practical, or realistic movie, as a viewer, I tried to pardon that assumption and move on, waiting for Trevorrow and his team to at least damage, or obviously tarnish some significant aspect of Dearing's on point wardrobe. (Yes, pumps, I'm primarily looking at you.)

Unfortunately, although I maintained mad respect for Howard's commitment to running in those patent leather heals as she portrayed Dearing heroically luring a lumbering T-Rex toward the movie's unsuspecting female antagonist, I was disappointed when it came to Dearing's final wardrobe damage tally.

Her chic lavender tank top has nary a stain, despite the fact that earlier in the movie she had a raptor's head (who had been in the midst of heavy combat, blood, and mud) flailing about her bosom. Yes, the delicate white blouse that she rolled up during her exchange with Grady had some cuff stains, and her pits we, well, pitted, but there were no grass stains, no blood droplets, no obvious proof of the fact that Dearing had just spent the past day fleeing death in the midst of a jungle. And for the love off all things tenable, how were those heals still fully intact and free of mud, leaves, or any discerning proof that they had trekked through the worst of the worst?

Walking into Jurassic World, one carries with them a sense of anticipation and uncertainty. And I don't want to be overly critical of Dearing, as on a whole, her character was amusing, strong willed, and showed signs of personal development over the course of the story's arc. I had hoped that Jurassic World would glean from me the following reactions: That I would squee with joy, clench my hands in suspense, and gasp in disbelief.

For all intents and purposes, it did just that. And, it wholeheartedly satiated my need for dino-induced nostalgia. But my plea for future additions to the Jurassic Park series is that we continue to aim for even more fully developed female leads (kudos for making the majority of this cast's anti-heroes and antagonist female), and in the process, be careful to ensure that their wardrobe realistically reflects not only their initial personality, but the climate of their character arc. Because taking Dearing from looking like a perfectly polished element of contrast to a hellaciously harried heroine would have added to her development (and vulnerability, which lends to her personal strength), not hindered it.