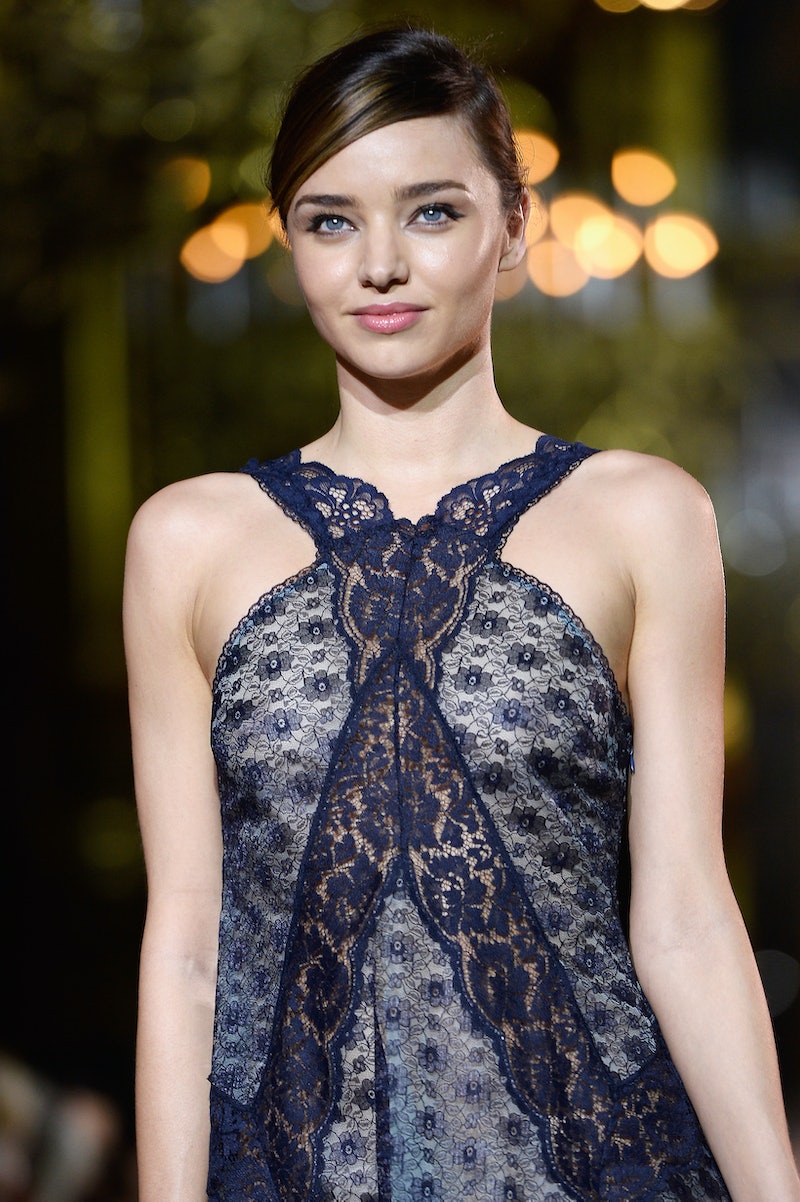 It doesn't need to be verbalized, but I'm going to say it anyway: Miranda Kerr is one of the world's most beautiful women. One glance at her Instagram account, and it's clear the Victoria's Secret supermodel has more than money going for her (i.e. one hell of a body and a gorgeous face to boot). So why would someone who is so idolized by the public for their beauty, feel the need to alter their image via computer? That's right, Miranda Kerr photoshopped an Instagram from the VS fashion show.

The photo features Kerr posing along side fellow Angels Doutzen Kroes and Alessandra Ambrosio after wrapping the infamous runway show. The only problem? Kerr's stomach is photoshopped to appear thinner than the original image. Yes, the already insanely fit and petite model had her waist shrinked with the click of a mouse. The Fashion Spot first took notice of the discrepancies between the original and Instagrammed pic, also noting that several of Kerr's other Instagrams also looked digitally altered.

If your jaw hasn't hit the floor just yet, take a look at the image in question:

A huge difference, no? When the former partner of Orlando Bloom caught wind of the controversy, she deleted the altered image and replaced it with the original, claiming she was ignorant to any photoshopping. She captioned the new image:

Hi guys, here is the original VS image! When I re-posted the photo this week to support the girls I screen grabbed it off the internet when I was working in Japan. I had no idea it was photoshopped. All good intentions- sorry for the confusion and congratulations to the girls for such a great show! ❤

Well, phew. I mean, maybe it's just an excuse, but we're glad she remedied the problem. In an industry controlled by faux images (because apparently not even the world's most beautiful women are skinny or airbrushed, or big-breasted enough for the public's consumption), we need to remind ourselves of one tiny, but hugely important fact: Photography, from its inception in the 1800s, was never intended to capture reality. Sure, as time progressed it became a valuable tool in capturing "real" moments like those in wartime, but photography wasn't originally intended to capture real moments, it was created as an art form.

While we often associate photography with truth, perhaps we need to be reminded that even America's oldest, most famous photos were altered in the dark room. Even this 150 year old portrait of Abraham Lincoln was discovered to be two images stitched together. A digital forensics expert summed it up perfectly by saying:

Although we may have the impression that photographic tampering is something relatively new - a product of the digital age - the reality is that history is riddled with photographic fakes.

So while we can be as shocked as ever at Kerr's tinier than usual tummy, we shouldn't be all that surprised. Yes, the fashion industry is a dangerous animal that needs to realize beauty is found in more sizes than 0. But at the same time, let us not be ignorant consumers. If it looks too good to be true, chances are, it is.

More like this
Sandra Bullock, Girlboss Extraordinaire
By Matt Harkins & Viviana Olen
Spice Girls’ Net Worth: The Richest Member Is Wealthier Than The Rest Combined
By Hugh McIntyre
Lydia Leonard Is Setting The Record Straight
By Olivia-Anne Cleary
Bustle Newsletter: May 6, 2022
By Stephanie Talmadge
Get Even More From Bustle — Sign Up For The Newsletter