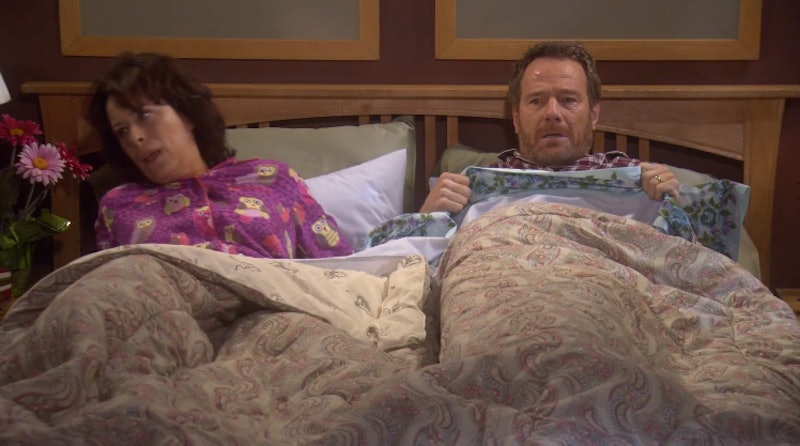 Breaking Bad wrapped up a lot of loose ends with its finale, so audiences weren't left with an overabundance of questions. Still, this alternate ending to Breaking Bad , which will be appearing on the DVD extras of the final season, leaves us with some. Namely, how fucking weird would it have been if the series had actually ended this way?

This scene also answers the question of what the hell Jane Kaczmarek was doing on the set of Breaking Bad all those months ago. Because, did we mention? This Breaking Bad alternate ending is literally "what would happen if Breaking Bad had all been a dream and we were all still in Malcolm in the Middle?" Which, we have to admit, is something we've contemplated before.

"I told you not to eat those deep-fried twinkies" Lois chastises Hal as he wakes up from telling somebody to say his (Heisenberg) name. He then regales her with tales of his nightmare, from his DEA agent brother who "looked like that guy from The Shield," to "this other guy who was a waif, a man-child kid who always looked like he was wearing his older brother's clothes and who would always say things like hey bitc — I mean B-word."

This is, of course, a crossover that has existed on the Internet since day one — exhibit A — because you can't give Tumblr or Reddit a terrifying meth dealer without them reverting him into a hapless father of four who, well, also runs around in his tighty-whities much like Walter White did.