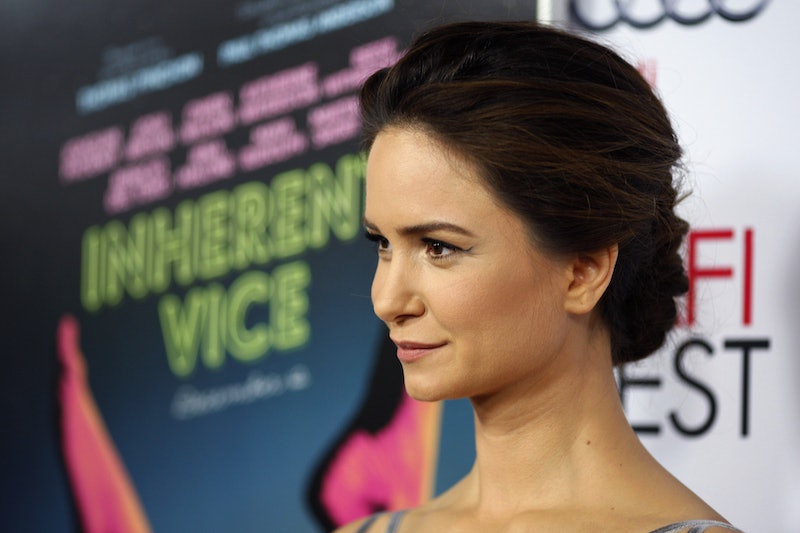 Those of us who grew up eagerly devouring each new book in the Harry Potter series the moment it came out know that we'll never be able to replicate that feeling... but watching excitedly as each new person gets cast in the upcoming spin-off movie comes pretty close. The newest addition to the list is Katherine Waterston, female lead in Fantastic Beasts and Where To Find Them , who was announced on Monday to be starring opposite Eddie Redmayne. Redmayne's casting news is something we've already been swooning over for a couple weeks now, but the addition of Waterston is just icing on an already tasty cake.

The lucky lady will be playing a witch named Porpentina — "Tina" to her friends — to Redmayne's Newt Scamander, the future writer of the textbook that will inform Harry, Ron, and Hermione's study of magical creatures at Hogwarts. Tina meets Newt, a "magizoologist," when he travels through New York City, where she lives and works. So we have an American in the mix, folks! Pretty exciting!

If Waterston looks familiar, it might be from the movies Michael Clayton, Inherent Vice, or from her work as Emma Harrow on the TV show Boardwalk Empire, but she has her work schedule pretty much set at this point. After all, Fantastic Beasts is planned as a trilogy, the first movie of which is scheduled to premiere Nov. 18, 2016.

In the meantime, there are apparently still four major roles that need to be cast, so plenty more opportunities to get that jolt of excitement from the old days of midnight book purchases. Or, y'know, you could go down to Warner Bros.' studio and try to pitch yourself as Tina's younger sister Queenie, or Newt's rival, Jacob. It's really your call. (And I think you know which call to make here.)