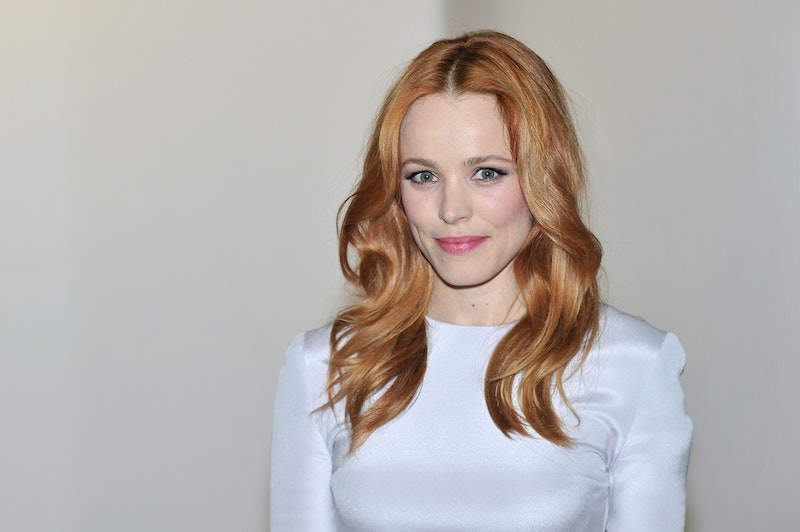 Happy birthday, Rachel! To celebrate one of our favorite Hollywood actresses, Rachel McAdams, turning 35 today, here's 16 facts you may not know about her roles in some of her most beloved films, from Mean Girls to The Notebook.

1. Woody Allen always had Rachel McAdams in mind when writing Midnight in Paris. When he pitched her the part, he told her, "It would be much more interesting for you to play this kind of character. You don't want to go your whole life playing these beautiful girls. You want to play some bitchy parts. It's much more interesting for you." She agreed, and played the annoying and demanding lead's finance perfectly.

2. In Red Eye, there is a scene where Cillian Murphy throws Rachel McAdams in the plane bathroom. When filming the scene, Murphy missed the spot where he was supposed to throw McAdams, hitting her head and knocking her unconscious for half an hour. But being the resilient actor she is, when she awoke, she was ready to shoot the scene again. But understandably, Murphy was scared to try again. In the take used in the film, Murphy's hand can be seen holding the back of McAdams' head to guard it from it hitting again.

3. In About Time, Zooey Deschanel was originally supposed to play Mary, but when she dropped out, Rachel McAdams was cast.

4. In an interview with ET, Channing Tatum revealed that during a scene in The Vow where he walks naked in front of Rachel McAdams, he wore a prosthetic penis that was hugely oversized to elicit a reaction from the actress. This was the scene used in the final cut.

5. In Sherlock Holmes, Rachel McAdams did most of her own stunts.

6. In Wedding Crashers, to keep Rachel McAdams smiling take after take during their dancing scene, Christopher Walken kept repeating "fart" in her ear.

7. If Rachel McAdams hadn't nailed her audition, other actresses who could have played Allie in The Notebook include: Ashley Judd, Reese Witherspoon and Britney Spears (!!!).

9. She also wore a fat suit for the scenes where she gains weight and can't fit into her prom gown.

11. Although she plays Regina's mother, Amy Poehler is only seven years older than Rachel McAdams in real life.

12. Similarly, Lindsay Lohan and Rachel McAdams are supposed to be in the same grade, but McAdams is actually eight years older than Lohan.

13. Despite the fact that Mean Girls was set in Evanston, Illinois the entirety was filmed in Canada, the nation of Rachel McAdams’ birth.

15. After filming, Rachel McAdams and Ryan Gosling had a much publicized romance but broke up in 2007. However, recent rumors suggest they could be back together (#McGosling4Eva).

More like this
Shocked Fans & Former Co-Stars React To Ray Liotta’s Death At 67
By Grace Wehniainen
'Stranger Things' Star Joe Keery Is Dating An "Indie Scream Queen"
By S. Atkinson and Grace Wehniainen
Laura Dern Said “Cultural Awareness” Made Her Rethink This 'Jurassic Park' Fact
By Grace Wehniainen
Amanda Seyfried Reflects On 'Mean Girls' & "Gross" Remarks That Men Made After It
By Jake Viswanath
Get Even More From Bustle — Sign Up For The Newsletter