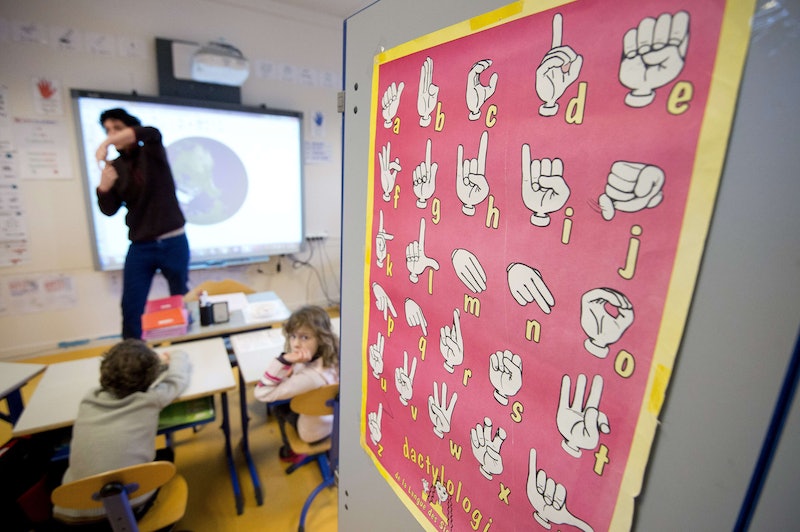 Recently on his Facebook page, author Neil Gaiman shared a video of a sign language interpretation of his poem "The Day the Saucers Came," from his 2006 collection Fragile Things. As Gaiman commented, the interpretation by YouTube user Crom Sanders is indeed "rather wonderful" and definitely worth a watch. And it also isn't the only signed poem you can find on YouTube.

There is a long and proud tradition of original poetry in American Sign Language, or ASL, most of which is difficult to translate into English or other vocalized languages. ASL poems' use of three dimensional space, facial expression, and body movement creates dynamic and unique works all their own. However, people in the Deaf community also occasionally translate English poems into sign language, which can also be incredibly cool. Although interpreting poems doesn't seem to be as popular as interpreting songs (which is also amazing and something you should check out), there are still a fair number of videos of people interpreting poems into sign.

So if you're looking for a new take on some of your favorite poems, seeing them interpreted into ASL can be an amazing, captivating experience, especially if you know some sign. Here are 6 poems that are great to watch.

"The Day the Saucers Came" by Neil Gaiman

The poem itself is already entertaining, but represented in three dimensions it gets infinitely better.

Done by YouTube user ASL Interpreter@S.Hansen, this interpretation of Poe's unsettling poem will have you mesmerized.

"The Sleeper" by Edgar Allen Poe

And it seems that Hansen isn't the only fan of Poe. This interpretation of Poe's "The Sleeper" is done by Andrea Moore and is also great (though if you want to follow along, you'll have to look up the poem's text yourself.

["Hope Is the Thing With Feathers"] by Emily Dickinson

Turns out Emily Dickinson's use of imagery works great in sign language, or at least it does here in this interpretation of ["Hope is the thing with feathers"] by Eric Epstein. (For the poem text, make sure the captions are turned on).

And Dickinson isn't the only poet Epstein has interpreted. Here you can also see him doing Shakespeare

This poem about the slaying of the fantastical Jabberwocky is even more fun when you get to act it out a bit. Interpreted by YouTube user carissab128.