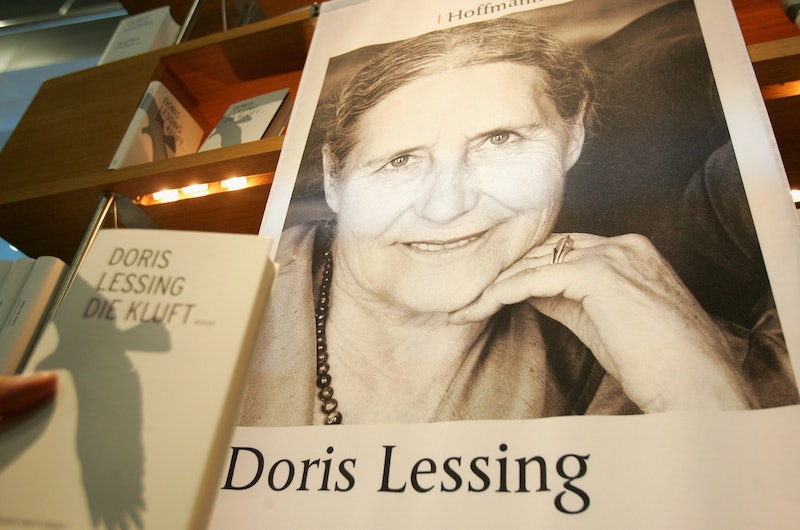 Known to many as the author of the "feminist bible," Nobel Prize winner Doris Lessing passed away early Sunday at the age of 94. One of the most celebrated British writers of the last century, Lessing penned over 55 works of fiction, nonfiction and poetry, among them The Golden Notebook, Memoirs of a Survivor and The Summer Before the Dark, and is known as much for her radically independent nature as her awe-inspiring words.

Born Doris May Tayler to ex-pats in present-day Iran, she moved to Southern Rhodesia at the age of five, where she lived until she was 29. Because she was an outspoken critic of apartheid, Lessing was banned from both South Africa and Rhodesia (now Zimbabwe) in 1956, although she made it back to South Africa in 1995 to visit her daughter and grand daughter. Her fiction reflected her upbringing, often dealing with issues of race, gender and colonialism. She questioned permanent institutions and fixed ideologies, and was never afraid to speak her mind.

"Here was a writer who said the unsayable, thought the unthinkable, and fearlessly put it down there, in all its raw emotional and intellectual chaos. She managed to make sense of her material, but at enormous risk, " said author Margaret Drabble.

In 2007, Lessing became the oldest (and only the 11th female) winner of the Nobel Prize for Literature, when she was given the award for her life's work at the age of 87. At the award ceremony, she was called the “epicist of the female experience, who with skepticism, fire and visionary power has subjected a divided civilization to scrutiny;” with the chairman of the Nobel Committee for Literature saying Lessing had "displayed an almost limitless empathy with odd lives and a freedom from prejudice regarding every form of human behavior.”

Her most famous piece of work is the 1962 novel The Golden Notebook , which, with its stylistic innovation and radical ideas, was considered the essential feminist work of the period, and the inspiration for many 20th century feminists. But ever the maverick, Lessing refused to categorized and continually argued that her work wasn't just about sexism, but about prejudice in general, and in fact criticized many 21st century feminists. She writes:

"When I wrote The Golden Notebook it never occurred to me I was writing "a feminist bible". The 60s feminists were not the first in the arena. "The Woman Question" dated from the 15th century. In communist circles in the 40s and 50s feminist issues were much discussed. But the second sentence of The Golden Notebook is: "'The point is,' said Anna, 'as far as I can see, everything is cracking up.'" This is what I thought The Golden Notebook was about, as its "structure" said. Everything was cracking up, and by now it is easily seen that we live in a fast-fragmenting culture.

So I became "a feminist icon". But what had I said in The Golden Notebook? That any kind of singlemindedness, narrowness, obsession, was bound to lead to mental disorder, if not madness. (This may be observed most easily in religion and politics.)"

Most of all, she believed in the power of imagination, the importance of equality, and the vital role of the writer. She writes:

"The storyteller is deep inside every one of us. The story-maker is always with us. Let us suppose our world is ravaged by war, by the horrors that we all of us easily imagine. Let us suppose floods wash through our cities, the seas rise. But the storyteller will be there, for it is our imaginations which shape us, keep us, create us -for good and for ill. It is our stories that will recreate us, when we are torn, hurt, even destroyed. It is the storyteller, the dream-maker, the myth-maker, that is our phoenix, that represents us at our best, and at our most creative."

As the Twittersphere will attest, the world will be the poorer without her:

More like this
The 20 Best Audiobooks To Fall Asleep To
By Aoife Hanna and K.W. Colyard
10 Must-Read New Books Out This Week
By K.W. Colyard
Selma Blair Wrote Through The Pain
By Samantha Leach
How Reality TV Stars Conquered Your Bookshelves
By Anna Peele
Get Even More From Bustle — Sign Up For The Newsletter