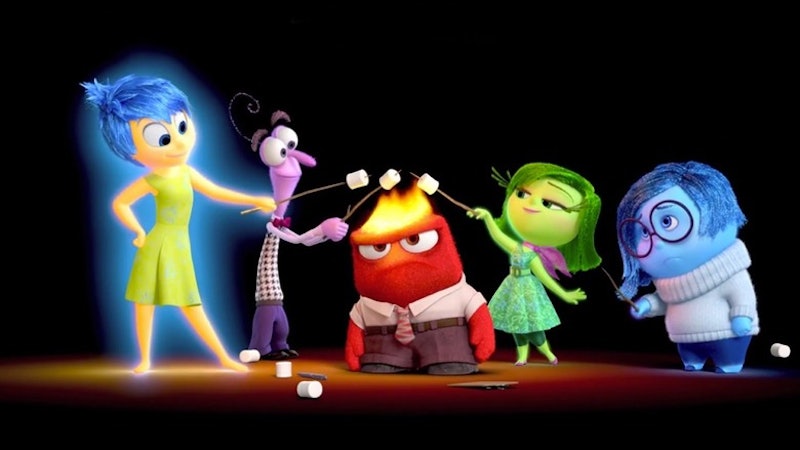 Pixar is constantly pushing the limitations of technology and creativity with every new film they release. It's such a daunting task to create a film that is accessible to a younger audience and yet still engages and amuses the adult spectator. I was lucky enough to catch an advance screening of Pixar's latest flick and, let me tell you, Inside Out is the must-see movie of the summer. The fact that it's an animated film by Pixar makes it a must-see automatically but there is so much more that makes this film worth seeing.

Inside Out, according to critics’ reviews, just might be Pixar’s most stunning work yet. Inside Out takes us into the head of a preteen girl named Riley. As is to be expected with a preteen girl, Riley's emotions are all over the place. This hormonal stage in Riley's life provides the perfect opportunity to delve into the depths of her brain, Mrs. Frizzle style, to see how her main emotions – Joy, Fear, Disgust, Anger, and Sadness – duke it out over which emotion will reign supreme and influence Riley's day.

Forget Jurassic World, forget anything else that is coming out this summer, go see Inside Out first. It will make you laugh, it might even make you cry (I am guilty of this one myself), and it will definitely make you think long and hard about your own emotions and how you perceive the world around you.

Inside Out hits theaters everywhere on June 19 and I strongly encourage anyone and everyone to check it out. If you don't know much about the film, check out the trailer below and then peruse my list of reasons why you absolutely must go see Inside Out.

Pixar has reached monumental success in part due to their constant innovation with animation. Take away all of the technology, though, and Pixar is successful primarily because of one thing: they are spectacular storytellers. Pixar takes a simple idea and injects it with complexity and grace or transforms an abstract concept (like the ever-ambiguous machinations of human emotion and free will) into something beautiful, digestible, and light-hearted.

Pixar films usually begin with an astonishingly creative and heartfelt animated short to get the ball rolling. The tiny masterpiece that prefaced Inside Out is a short little flick called Lava. Check out a brief clip of Lava above and see for yourself what an absolute treat it is.

The Critics Are Raving About It

Pixar films generally do pretty well with the critics but, from the moment Inside Out debuted at Cannes, the critics have been raving. At the time this was written, Inside Out boasts a 100% score on Rotten Tomatoes.

Todd McCarthy of The Hollywood Reporter said of the film, ”Inside Out has to be one the most conceptually trippy films ever made as a PG-rated popcorn picture for the general public." Chris Nashawaty of Entertainment Weekly called Inside Out "[a] movie that's so smart and psychologically clever, it may leave little ones scratching their heads wondering why their parents are laughing so hard and getting so choked up."

Anything with Amy Poehler is bound to be amazing. Anything with Mindy Kaling is bound to be amazing. Put those two together and there's no way you can go wrong. In Inside Out, Mindy Kaling voices the emotion of Disgust and imbues the character with her signature wit, sass, and larger-than-life personality. Meanwhile, Amy Poehler voices Joy, who is like a markedly less grumpy Tinkerbell who had a few too many 5 Hour Energy drinks. Hilarity ensues.

It Could Help People Better Understand Depression and Anxiety

During my first year of grad school, I was diagnose with Generalized Anxiety Disorder and had the lucky experience of undergoing a handful of panic attacks. There were so many times where I felt like I wasn't myself; my logical brain would know that everything was fine but that did nothing to quell the overwhelming waves of dread and terror that would flood my body.

I have felt like a victim of my emotions more times than I can count and I think that anyone struggling with depression or anxiety understands the experience of feeling like you are helpless and at the mercy of your own brain.

Inside Out's exploration of emotion perfectly embodies that feeling of helplessness. At times, Riley is just a vessel propelled entirely by her fickle emotions and the roughest times for her occur when her emotions are imbalanced and she doesn't understand why she reacts the way that she does.

It's Suitable For All Audiences

When I saw Inside Out, the theater was packed with a diverse audience, from toddlers to people old enough to be my grandparents. As I departed the theater, I looked around and noticed that everyone, regardless of age, was clearly enamored by the film.

The kids giggled at the silly moments and reveled in just how fun the film is. The adults laughed at the more sophisticated jokes and connected to the complex feelings of loss and nostalgia that Riley experiences as she begins to grow up. As with most Pixar films, Inside Out seems to be a complex, thoughtful film with larger philosophical themes that masquerades as a children's film.

Yes, the kids will love Inside Out. But there are also so many deeply complex layers of the film that explore sadness, loss, and the ephemeral nature of human existence that even I, as an educated adult, still can't fully comprehend.

According to Dacher Keltner, a professor of psychology at the University of California, Berkeley, Inside Out's portrayal of human perception and emotion, while quirky, isn't that far off the mark. According to Keltner:

[Inside Out] zeroes in on one of the most poignant times in an individual's life, which is the transition to the preteen and early teen years, where kids — and, I think, in particular girls — start to really powerfully feel the loss of childhood.

Inside Out also demonstrates pretty accurately how memories are formed and stored in our brains. When Riley sleeps, her memories are processed and stored; you see her experiences turn into abstractions; you can even see the guard up that protects the unconscious mind from the rest of the brain.

You Will Feel Justified For Your Moody Teenage Years

Anyone who has gone through puberty understands the fickle nature of hormones and how drastically they can color your perception and behavior. Being inside Riley's brain and seeing the complex interactions between the emotions in the Control Center will make you feel better about your own temperamental behavior in the past. "Sorry I snapped at you, Mom. Anger just took over in the Control Center so it wasn't really me talking back..."