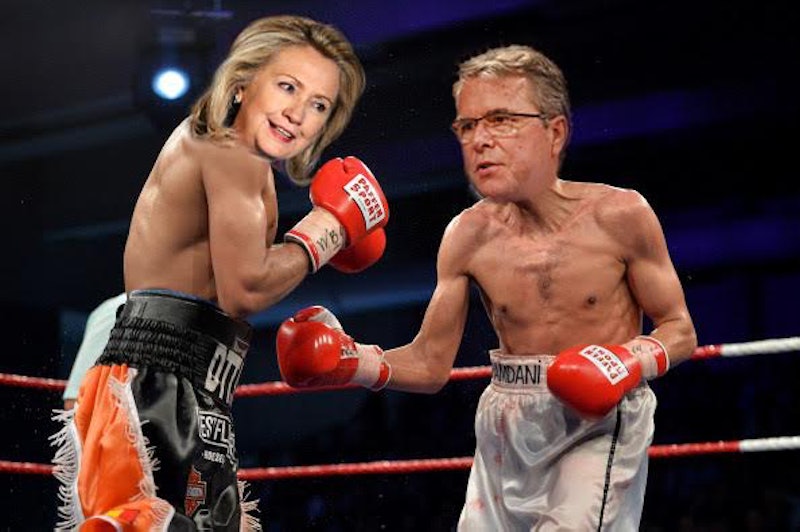 Forget the Floyd Mayweather and Manny Pacquiao boxing match. The real fight of the century is one between two political dynasties: Clinton versus Bush. Hillary Clinton has been involved in politics for nearly 42 years, and her former titles include First Lady of Arkansas, First Lady of the United States, United States Senator, and Secretary of State. Jeb Bush, the son and brother of two former U.S. Presidents, has been around politics for a little less than Clinton — just over three decades. (Amateur.)

So it’s no surprise that between those two candidates, there are a long list of gaffes, scandals, and policy mistakes, and some more in the making. While The Intercept’s Glenn Greenwald has pointed out that having another Clinton or Bush in the White House would encircle an underlying oligarchical framework contradictory to the values of democracy and share several substantial policy viewpoints, there are still numerous distinctions between the two candidates. For example, Clinton believes there should be no restrictions preventing women from obtaining an abortion and same-sex couples from getting married, whereas Bush strongly opposes those positions.

On the other hand, when it comes to education, Bush takes on a favorable view towards school choice — something Clinton strong opposes. So whether you bleed blue or red, it’s time we took a look where these candidates stand head to head and to say hello to our oligarchs.

It’s no secret that Hillary Clinton made $30 million in the last eighteen months in speaking fees and book sales. But the Democratic candidate initially offered a different narrative when she told ABC News’ Diane Sawyer that after the Clintons’ left the White House in 2001, they were “dead broke” and in debt. She added that the Clintons’ struggled with mortgage, college tuition payments, and had “no money.”

After public outrage, Clinton expressed regret and attempted to own up to her remarks. She explained to Fusion TV’s Jorge Ramos that she regretted her comments, but reiterated that the political family suffered financially quite some time after they left 1600 Pennsylvania Avenue.

“I regret it. It was inartful. It was accurate. But, we are so successful and we are so blessed by the success we've had. And my husband has worked incredibly hard,” Clinton said.

Jeb Bush thinks immigrants are great for the economy and... breeding.

Unlike other GOP presidential candidates, Jeb Bush has a far friendlier policy when it comes to immigration. When Bush 3.0 was talking to a crowd at the 2013 Faith and Freedom Coalition’s “Road to Majority” conference in Washington, D.C., the Republican tried to bring a conservative case for immigration reform. He told the conservative crowd that allowing immigrants from across the border to enter the country legally would mean the country will benefit from opportunity creation and economic growth.

Of course, the media didn’t hold any punches. The best hit came from New York Magazine with "Jeb Bush: Give Us Your Tired, Your Poor, and Your "More Fertile" Immigrants."

Hillary Clinton's email scandal is just one more added to a long list of some shady, shady business.

Hillary Clinton is no stranger to scandals. It’ll take more than one hand (or two) to count up how many scandals that are associated with her: Clinton Foundation donations, Whitewater, Benghazi... the list goes on and on.

But the most recent concerns emails she sent to the State Department during her term as Secretary of State. The controversy stems from the fact that administration officials had been instructed by President Obama to use their official email accounts. Clinton’s reasoning for this potential security breach was that she didn’t want the hassle of multiple email accounts, and left the responsibility for fixing it to her staff. But using a private email account discussing information still leaves her susceptible to cybersecurity threats from hackers and foreign enemies.

However, it’s the way the Clinton team handled the situation that made this become a scandal in the first place. Clinton had completely wiped out her server that contained thousands of emails in question. When asked by reporters on why she decided to delete over 30,000 emails, Clinton brushed off the question by simply (and suspiciously) stating they were personal correspondence — citing they were details about her daughter Chelsea’s wedding and yoga routines — that does not need to be saved.

She went on to defend her decision to wipe out the “personal emails.” “No one wants their personal emails to be made public, and I think most people understand that and respect that privacy,” Clinton said to a pool of reporters.

But her statements don’t hold as much weight, since her term as Secretary of State was dubbed one of the least transparent agencies by the non-partisan think tank Center for Effective Government and her continued support for state-sponsored surveillance on the electronic communications of American citizens. C’mon, Hillary.

Jeb Bush also doesn’t seem to understand how easy it is for emails to be hacked into. During his term as Florida Governor, Bush used his personal emails to discuss security, the deployments of the National Guard in the immediate aftermath of 9/11, and the protection of several nuclear power plants among several topics addressed in the email threads.

Bush aides rushed to his defense by arguing that the information exchanged with the personal emails aren’t confidential or top-secret and that many of them were featured in documents given to the press. This defense doesn’t seem to hold much weight, since several cybersecurity experts have mentioned that information, like troop deployments, could be abused by hackers sponsored by foreign enemies. It also didn’t help that Bush also criticized Clinton’s use of personal emails as “baffling.”

In compliance with Florida records laws, Bush turned in about 250,000 emails for state archives and didn’t wipe out any of his servers.

But things took a turn for the worse when Bush tried to showcase his commitment to transparency, when he dumped hundreds of thousands of emails on his website. Why? No one seemed to care to redact possible sensitive information on the email threads like phone numbers, addresses, and social security numbers. Yikes.

Hillary Clinton said it was a mistake to vote for the Iraq War, but the rest of her foreign policy positions said otherwise.

With Hillary Clinton running for president, it’s time we finally address the elephant in the room: Like both of the Bush brothers, Clinton would’ve also invaded Iraq. Then-Senator Clinton voted in favor of the 2002 Iraq War Resolution that allowed former President George W. Bush to use military force against former Iraqi leader Saddam Hussein in Baghdad. Six years later, this vote haunted her on the 2008 campaign trail when the opposition began calling her out for her hawkish foreign policy. Sure, she has expressed regret in her vote, but Clinton’s “mistake” made a déjà vu appearance during her term as Secretary of State.

When talking with a television reporter in Afghanistan, moments after receiving news of the death of former Libyan dictator Muammar Gaddafi, Clinton joked through a Julius Caesar reference. “We came, we saw, he died,” Clinton said before bursting into laughter.

When asked by the reporter if the Secretary of State believes her public support in Libya for the country’s regime change had anything to do with the killing of Gaddafi, Clinton showed a bit of unwarranted sass. After sarcastically saying “no,” she rolled her eyes, let out a little chuckle and said, “I’m sure it did.”

Now, like Iraq, Libya currently faces turmoil and is imploding into a hotbed of violent extremism after the country’s coup.

Jeb Bush says he would've invaded, but he still isn't sure, then he didn't understand the question asked, then said the invasion helped make Iraq stable (NOT!), and then oh wait, just kidding! He wouldn't have invaded Iraq.

Jeb Bush has been living his brother’s — the 43rd President of the United States — dark shadows. It was George W. Bush, after all, that led the 2003 Iraqi Invasion that led to a whirlwind of chaos, destruction, and then contributed to the creation of the Islamic State. But the former Florida Governor has been uneasy on answering the simple question: Would he have invaded Iraq in 2003?

His answers are all over the place and they were all given in one week. On May 11, he told Fox News' host Megyn Kelly that he would’ve invaded Iraq but acknowledged that the intelligence provided was “faulty.” “And in retrospect, once we invaded and took out Saddam Hussein, we didn't focus on security first. And the Iraqis, in this incredibly insecure environment, turned on the United States military because there was no security for themselves and their families,” Bush added.

But then the next day, he told Sean Hannity, another Fox News host, that he’s unsure of whether or not he'd invade Iraq in 2003.

“Yeah, I don't know what that decision would have been, that's a hypothetical. The simple fact is that mistakes were made,” the Florida Republican said. “As they always are in life and foreign policy. So we need to learn from the past to make sure that we're strong and secure moving forward.”

Yet again, Bush squirmed on the issue the following Wednesday and defended his brother’s decision in a town hall in Reno, Nevada. Talking to a group of supporters, he made the point that the questions asked on the Iraqi invasion were unclear and that hypothetical situations are doing a disservice for a lot of people that sacrificed a lot. But the real head-scratcher is when Bush told the crowd that his brother’s decision to invade “created a much more stable Iraq.”

And finally, on Thursday of the same week, Bush finally gave out his final answer:

But he still claims that his brother created a “stable Iraq” and that it was President Obama’s decision to initially withdraw several troops that led to the current on-going destruction in Iraq.