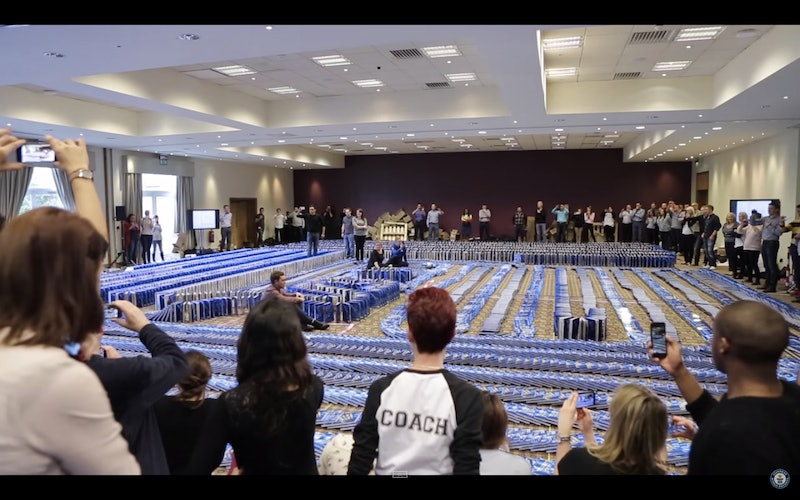 In recent years, there's a phenomenon in the books world that's been growing more popular: book dominoes. But although many people find them delightful, many residents in Japan object to their local library's book domino plans, calling it disrespectful to the books and their authors. Are they right?

In preparation for their grand reopening on July 18 following renovations, the Gifu City Library recently announced a book domino event for July 12, during which they would attempt to break the world record for book dominoes, currently set at 5,318 books and set by a U.K.-based food company. The proposed book domino in Gifu would reportedly consist of 10,000 donated books, which would then be sold to raise money for the library. But a lot of people in the area are upset by the plan.

“Books are not toys to be used as dominoes. Gifu City government should be ashamed," one Facebook user wrote on the Gifu City Library page, as translated by Rocket News 24. Other social media comments included things such as, “Books are for reading, not for playing," and “If one of my old books is in there, please don’t use it. And don’t do such stupid things.”

On his blog (as translated by The Telegraph, Takayuki Kitamura the head of a Japanese book café explained, “When I first saw this, it made me feel really bad. As a kid, I was taught never to mishandle books. By mishandling the books, we’re mishandling the minds of the people who wrote them.”

This reaction is in sharp contrast to reactions in the United States where book dominoes are much more warmly received. So what gives?

Well, as many have noted, treating books with care and respect as physical objects is more often stressed in Japan than it is here in the States, which means that while most Americans might regard book dominoes as fun and entertaining, people in Japan are more likely to see needless disrespect of books. And they do have a point. Books are more than their physical or digital forms — books are something special, magical, and important. So treating their physical manifestation as nothing more than a domino to be set up and knocked over could definitely be seen as disrespectful.

After all, I didn't grow up in a culture where handling books carefully was emphasized, and I still hate to break the spine or dogear the edges of a book I'm reading — and if anything spills within a 10 foot radius of my reading material, I will freak.

So are book dominoes fun or disrespectful? An inspiring way to show how cool books are or a sacrilegious way to needlessly damage books? Personally, I do still think book dominoes are pretty cool (what can I say, I'm product of my culture), but if you like you can check out this video of the current world record book domino in the U.K. and judge for yourselves. (The books are all copies of the Guinness Book of World Records, in case you were curious.)