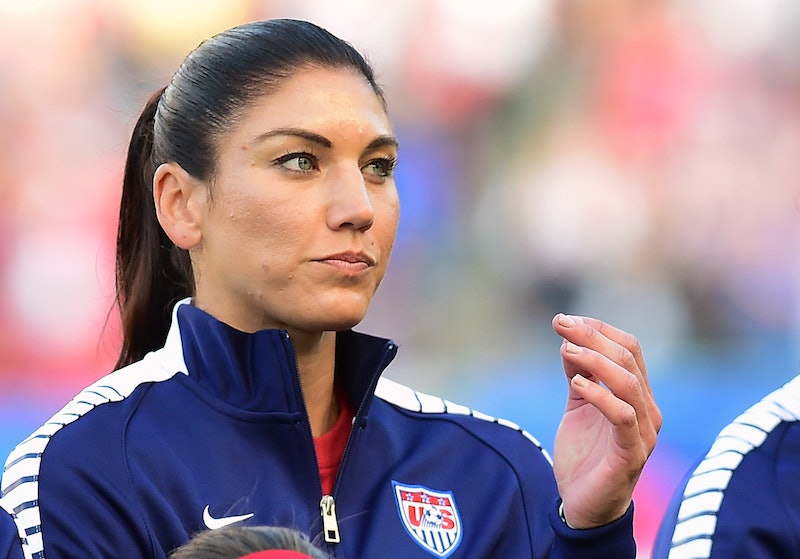 Hope Solo, currently competing in Canada as the goalkeeper for the U.S. women's national soccer team during the FIFA Women's World Cup, can't escape the allegations of domestic violence that Solo was arrested for last June. Even though all the charges were dropped, ESPN still published a detailed account of what allegedly happened that night and prosecutors have appealed the case, which will be heard by another court in September. The report has made the whole situation even stickier, but it has also placed a renewed burden on the U.S. Soccer Federation to investigate the claims, given the national conversations surrounding domestic violence in professional sports over the last year. Both U.S. Soccer and FIFA have policies against domestic violence, but neither of them have dealt with allegations that are as public as Solo's.

Solo claims she was the victim in the case, which involved herself; her half-sister, Teresa Obert; and Obert's 17-year-old son, who has gone unnamed because he was a minor when the incident took place, according to ESPN. Solo has denied assaulting anyone and expressed frustration about the way media have covered the entire case, which she told ESPN will now forever associate her name with domestic violence. Her husband, Jerramy Stevens, has called the investigation "unpatriotic" and described it as a "witch hunt." In an interview with Good Morning America, Solo said the night was "scary," according to ESPN:

I was a victim of domestic violence at the hands of my 17-year-old nephew, who is 6-foot-9, 280 pounds. I was struck over the head, and concussed pretty severely. It was a very scary night.

U.S. Soccer has allowed Solo to play for the entirety of the World Cup. Solo was suspended from the women's national team in January for 30 days for "an incident that occurred during the current WNT training camp being held in Carson, California," according to CNN, but she never faced disciplinary charges for the domestic violence allegations.

U.S. Soccer has come under fire for their lack of action recently, so it mounted a defense Friday, according to The New York Times. The organization said that as part of its own investigation, it had obtained part of a police report and interviewed Solo, but it chose not to suspend her because it believed the statements made by the relatives that she was accused of assaulting were inconsistent.

Sunil Gulati, president of U.S. Soccer, wrote a letter Friday to Sen. Richard Blumenthal, a Democrat from Connecticut, as a response to Blumenthal's criticism of the federation's “failure to take adequate action to investigate," according to the Times. In the letter, Gulati did not address why the U.S. was continuing to use Solo instead of benching her until the case is completely resolved.

Athletes in Olympic-related sports are given an appeals process, so, Gulati wrote, Solo could not be suspended without first being able to call witnesses and going through binding arbitration. He said Solo could face punishment for the police reports that alleged that she harassed police officers during her arrest, but the documents obtained by U.S. Soccer did not include those reports, so he said they will have to be investigated separately. He said "the federation considers domestic and family violence a very serious matter,” according to the Times.

FIFA has not spoken publicly about the allegations against Hope Solo, but it can sanction players or teams for breaking laws within their home nation or for not complying with investigations. FIFA hasn't taken issues of violence and racism lightly in the past. The international soccer community was confronted with acts of racism just before the men's World Cup, so FIFA started an anti-racism campaign, according to The Boston Globe. At the World Cup quarterfinals in Brazil, for example, each captain read a declaration against racism and discrimination just before kickoff. It generated worldwide attention and made a serious statement about FIFA's intolerance of racism.