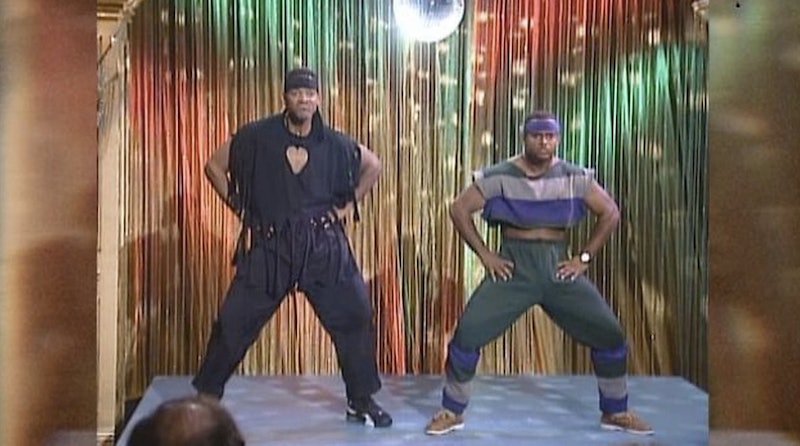 Given that the Fresh Prince of Bel-Air theme is possibly the most influential song of my childhood, I've long associated the show with music. Also, the series was conceived as a comedy vehicle for Will Smith, a guy who at that point was known much more as a hip-hop artist than as an actor. With that kind of development backstory, it's no surprise that music and dance were such a key part of the show's legacy. (Long live The Carlton.) But which Fresh Prince musical moment reigns supreme? That’s what I’m here to find out.

Every Fresh Prince fan has a favorite musical moment or three. (Or five, or ten.) With pop and R&B stars popping in every so often, a multi-talented core cast, and a heavy reliance on scenes set to music, there are tons to choose from. I scoured the Internet for the most memorable Fresh Prince scenes that feature singing and/or dancing, and ranked them according to their dope-ness. Here they are, in all their melodic glory: From spontaneous strip shows to dreamy fantasy sequences to a complete Banks family Soul Train line. Counting down to number one, I give you the greatest Fresh Prince musical moments in the show’s prestigious history.

Short and sweet, just like Carlton. Points for festiveness!

Carlton and Ashley take you to church.

Aunt Viv and Uncle Phil won't stay mad at each other. Not on Will, Carlton, and Aunt Helen's watch.

A Banks family favorite, this Temptations classic soundtracked not one, but two group dance parties.

Carlton Banks may have missed his calling as a lounge singer. Also, this pink plaid polo is everything and more.

When Carlton wallows, he wallows in a weirdly retro style.

Boyz II Men stopped by Bel-Air to promote their holiday album, which, by the way, is a modern classic.

Carlton "meets" his idol Tom Jones, and their musical union is as magical as he could have ever hoped.

Geoffrey ignores Will's questionable moves and opts for "The Forbidden Dance" instead. My man is fearless.

It wasn't entirely realistic for Will to promise that the Boyz would sing at little Nicky's christening, but somehow, he came through. The feels.

"I ... I was tryna be in the video." Ty deserved more screentime. Also, I'm basically trying to ape Will's moves here any time I'm at the club.

You better get it in that pink unitard, Aunt Viv.

"That's my Will: the one with the mustache."

6. Carlton Learns About The Blues

RIP the legendary BB King. Show a little respect, Will.

Jazz on drums, Will on the floor, and I don't think Ashley will be picking up that violin again anytime soon.

Will sings his refusal to leave a humiliated Uncle Phil alone, and I dare you not to crack a smile.

Ashley makes her public pop debut in a super cute bra top and backed up by two super dorky dancers. Boys are so embarrassing.

The Banks family takes on Soul Train, and Carlton annihilates Will on the dance floor. It's a thing of beauty.

From the crop tops to the stank faces to the dance you know you do every time you hear this song, this Fresh Prince musical moment has got it all.

The family that sings together, stays together. And, as these musical moments prove, the Banks family never really stopped.