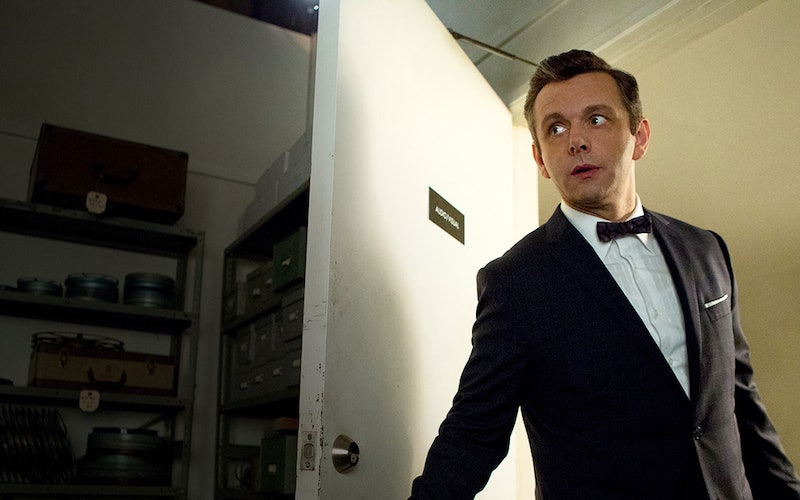 With its head-first dive into the issues of race and homosexuality, Masters of Sex finally scoots out of its fussy period-drama cardigan — one more interested in landmark historical events and tropes than the people impacted by the movement of history — and into something much more human. And, luckily, much smarter. Multi-dimensional characterization has been an on-going weakness of the show, but with the introduction of Walt, handyman to the Masters, strolls in a character who simultaneously subverts cultural expectations while still being inextricably tied to them. (Spoiler alert: He's African-American and he faces a lot of subtle, and not so subtle, racism on a daily basis.) Hat tip to the show writers for this one.

Masters of Sex is growing into itself nicely. Though that new introduction, I do not want to think about petting a cat in that way. Hey, pussy pussy.

And onwards to this week's burning questions:

Will William Masters ever turn into a real boy?

Beyond knowing that Masters can have sex and has a refractory period of about 16 minutes, the show's characterization of the tweed-covered doctor is less than humanizing still. (And we're a whole eight episodes in!) "What he really expects of you is to be a seismometer registering his silent vibrations from miles away," Virginia explains to new secretary, Jane. What he expects: No stray paper clips, no mayonnaise, and no questions.

If you were Carrie Bradshaw, you might not be able to help but wonder, When do men stop being "men" and begin becoming human? Actually, she'd never ask that. But you should!

Have you forgotten that women are in a very precarious position during this period? Because they are.

Early in the episode, Jane tells Virginia about a secretary who was fired. She had been sleeping with the boss hoping to secure her job, until the wife found out. The secretary got nothing — no note of recommendation, no severance. "He was married. He felt guilty. So she paid the price."

And, throughout the episode (namely, the lengthly screen time Dr. DePaul gets), the wheels of this theme continue to spin. After showing slides of a woman with cervical cancer that has metastasized to the liver (estimated prognosis: death in a few months), it's revealed that the slides were from Dr. DePaul's own file. The doctor only has approximately six months left to live.

Is Langham the worst person ever? When is he going to get his?

First, he's meeting Margaret Scully at the train station for a rendezvous, but them freaks out and cancels his tickets. "I'm beginning to have second thoughts about a number of things," Margaret says. "This is never going to be anything more than a casual fling anyway. Or is it?" Yes, just a fling.

Langham has another fling on a desk with the jewelry store clerk who sold him a pair of earrings originally intended for his wife. (The earrings are now hers.) And towards the episode's end, Langham asking Virginia to get back into the study with "anyone, everyone." Thank goodness "monogamous philanderer" was already oxymoronic.

Do you still believe that "Love and marriage go together like a horse and carriage"?

Ethan Haas wakes up one morning to Vivian in the kitchen singing "Love and Marriage" while cooking and panics. But this leads him to get a ring, and he more or less accidentally proposes to her in the middle of the hospital's cafeteria. She accepts.

Their relationship is in sharp contrast to two others this episode: Langham gets his wife a vacuum cleaner as a silent token of apology for running around on her. (Real romantic.) But his wife knows about the other women. It's made clear, with a litter of children, however, that she has to bear it. What else is she going to do?

And while in a bar after ending things with Langham, Margaret Scully runs into the Provost's male prostitute of choice and (not knowing he is gay or is servicing her husband) tells him: "Stay single ... When you're in love, everyone thinks they're the exception ... What's even worse is how much you'll feel like a failure."

After nearly being caught and still under heavy suspicion from his wife, the Provost tries to take her out, but the kiss makes a mollusk suctioning a stone seem romantic. "And 30 years later, we're still the best of friends," Provost says. "It's not enough. We have to divorce," she says.

Very different relationships, at very different phases, but all question the longevity of the sort of fairytale Vivian seems to be expecting and Haas still seems willing to give her.

Will Walt stay as a regular character on the show? (Hope so!)

Masters is never around to clean the gutters, so Libby hires a handyman. She's surprised when Walt is African-American, but even more so when he proves himself to be an architecture buff who also happens to be a great tango dancer.

When he tells her that his wife passed away, they share a moment. Says Walt, "It's easier when you don't think about it." He doesn't know about the miscarriage yet, it seems, but empathy is empathy.

He and Libby share an impromptu dance lesson, which might have been one of the most charming scenes of the series so far. Bonus points for the scene also being cleverly filmed with shots of their feet, rather than their hands, faces, or other places where much more skin shows.

The dance lessons continue, and Libby graduates from awkward to alluring. When she passes out while dancing, Walt takes her to the hospital.

Insert the requisite racism, well-positioned to be a theme as the series continues. (The doctor says, "Your boy can bring the car around." She hesitates for a moment to correct him, and rather than calling Walt a friend, she calls him her handyman.) Oh, and did you know? She's pregnant again!

And, oh no. How far is this homosexual "aversion therapy" storyline going to go?

After nearly getting caught by his wife, the Provost decides he needs to do something… about his homosexuality.

He approaches Masters, who mentions hearing about an aversion therapy in which you engage in the act you're are trying to avoid after taking nausea-inducing drugs. The Provost decides to give it a try and asks his regular, Dale, to either pleasure himself or just sit there while he takes the drug.

"I sit across from you and watch you vomit," the male prostitute astutely summarizes. And, in a great speech on a show high on melodramatic and self-important speeches, Dale says: "There's only one person who gets to be sickened by me, and that's me. Everyone else can go fuck themselves." Then he walks out. Bam.

Was that really necessary?

Masters and Johnson (with a little help) attach a video camera to Ulysses and film a vagina (Jane's to be exact) while it experiences orgasm. You, lucky audience, get to see some of it. It basically looks like an esophagus — pink, pulsating, undulating.