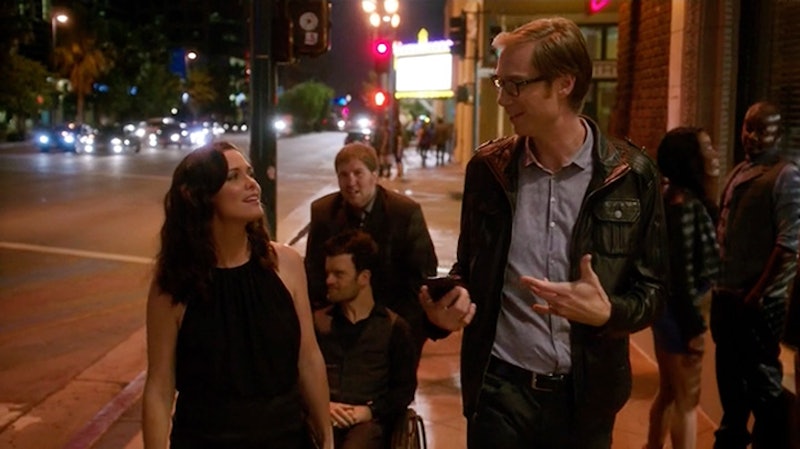 You didn’t expect a happy ending for Stuart and Jessica did you? The way Stephen Merchant capped off the first season of Hello Ladies with a powerful dose of truth couldn’t have been more weirdly satisfying, even though it wasn't the ending everyone wanted. Let me explain: The episode proved yet again that its characters’ pipe dreams only get half-fulfilled. At the beginning of the episode, Jessica looks like she's about to be famous and Stuart’s looks like he's about to get with a model. (Unfortunately, by the end, neither of these things come true.) But, to start, the two of them have an amazing brag-off with cell phone pictures.

Jessica’s officially booked a high-profile gig. She’s moving out and she’s making headlines in The Hollywood Reporter. She even gets to serve Amelia with a well-deserved taste of her own medicine. But then she gets replaced in the role and Glenn ignores her sad calls because he doesn’t want that to be his Friday night.

Stuart’s about to get the woman he’s been fantasizing about. In grand cinematic fashion, Kimberly's waiting for him to come skinny dipping with him. But Stuart finds Jessica’s mint case and decides he should go comfort her instead.

You spend eight episodes with a dude, and you think you’ve got his number. But nope: He abandons Wade and Kives at the drop of a hat for a chance to chase the beautiful people. Then he up and ditches the model of his dreams when she’s naked in the ocean because he’s a good guy? Maybe he changed his mind after seeing Jessica’s agent for the scumbag he was, or maybe because he really wanted his "bathing costume."

But if this revelation didn’t work for you, it's because you were probably annoyed that after a season of no self-awareness or lessons learned, BAM. Into Stuart’s model-obsessed fantasy world arrives the tug of longing for Jessica. He changed too quickly and too fast so this all felt a little undercooked — like you popped a log of Pillsbury in the oven and decided three minutes of heat was solid enough.

Because here are the differences between how Stuart thus far has treated Kimberly and Jessica:

Stuart projects a fantasy onto her and he has work for it by chasing her around LA. She travels and she LOVES intellectual debates.

Jessica offers the opposite. She’s next door or even in his bed when the roof caves. She offers him companionship and lets him relax. Arguably, she's the better choice, but, considering Stuart had spent the entire season desperately seeking Kimberly, an epiphany about Jessica just doesn't feel natural.

And, when Stuart goes to Jessica, you don’t have the oh thank the heavens! They’re together! feeling. The fantasies didn’t pan out for either of them, but the reality’s a little depressing. They're just going to watch a movie together.

But how does Wade fit into all of this? The man finally gets a grip on his denial issues. He takes off of his wedding ring and crops his wife out of a picture. Earlier in the episode, Wade’s still holding out for reconciliation. Between yelling at coyotes, Jessica tells Wade, “Sometimes you just have to accept that things aren’t going to happen no matter how much you want them to,” the show’s proof that our hopes aren’t always realistic. At least he can tell Rory he saw Kimberly naked, though.

More like this
These 'This Is Us' Finale Theories Will Make You Weep
By Brad Witter
The 'Ozark' Series Finale Killed Off A Fan-Favorite Character
By Brad Witter
What’s New On Netflix: A Victoria Justice Rom-Com & The Return Of David Letterman
By Arya Roshanian
Will Vampire In The Garden Get A Season 2? What To Know
By Kadin Burnett
Get Even More From Bustle — Sign Up For The Newsletter