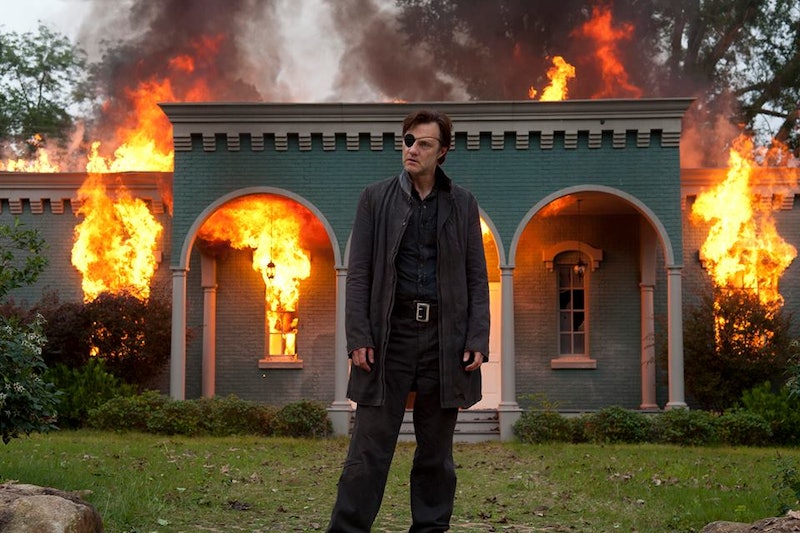 The Governor is back, but, surprisingly, not with a vengeance. This week’s episode of The Walking Dead put things on hold at the prison for now to welcome back last season’s most maniacal character. The episode attempted to paint The Governor, aka Philip Blake aka “Brian,” in a better light and show his possible change of heart. Maybe everyone deserves a second chance, but, then again, did you completely forget everything The Governor did last season? Before you make a final judgment about The Governor, let's recap how sane and compassionate he was in Sunday's episode:

1. On this week’s episode, The Governor was abandoned by the last of his Woodbury minions. He stumbled about until he came across an apartment building inhabited by sisters Lilly and Tara, their father, and Lilly’s young daughter, Megan. The Governor wasn’t very grateful for the family’s efforts to feed and take care of him (he definitely wasted some perfectly good Spaghetti-Os), yet he did agree to head out to a nearby nursing home and get oxygen tanks to help their father survive. The Governor made it back with a couple tanks, but he also made it back with a couple of injuries. He risked his life to help the someone else, gasp! (Unfortunately, their father still ended up dying soon after.) The Governor is not one to make good first impressions — remember his first encounter with Glenn and Maggie? Looks like he managed to get off on the right foot with his new group. So, how long before he turns on one of them?

2. The Governor made a father/daughter-like connection with the young girl, Megan. She was shaken up because of everything happening in the world and wasn’t talking to anyone. The Governor headed to another apartment where Lilly and Tara’s dad knew there was a backgammon set. He returned with the set, as well as a chess set. This gesture made Megan open up again and she took interest in talking to The Governor. She asked about his eye, and he jokingly told her he was a pirate. It was actually kind of a cute moment that showed what The Governor may have been like as a father. But this whole encounter is a reminder about The Governor’s disturbing past with his own daughter, Penny, who he kept locked up in his house in Woodbury and would occasionally take out to feed and brush her hair. Super creepy.

3. At the end of Sunday's episode, the girls and The Governor piled up in a delivery truck and headed off to find a new place or a new group or whatever the road would lead them to. After the truck won’t start, they take off on foot. Their travels lead them to a huge pack of zombies. (Surprising.) They book it into the woods where The Governor and little Megan fall into a deep pit with a couple of walkers. The Governor was in hand-to-hand combat with a couple walkers; ultimately he killed them with his bare hands and some old bones, saving himself and Megan. What a nice guy, right? The pit they fell in was reminiscent of the ones he used to dig to catch walkers for Woodbury’s questionably ethical zombie research program. Oh yeah, and how could we forget — he also made people fight the trapped walkers as “entertainment.” He’s obviously the sane and compassionate man that was portrayed in the episode.