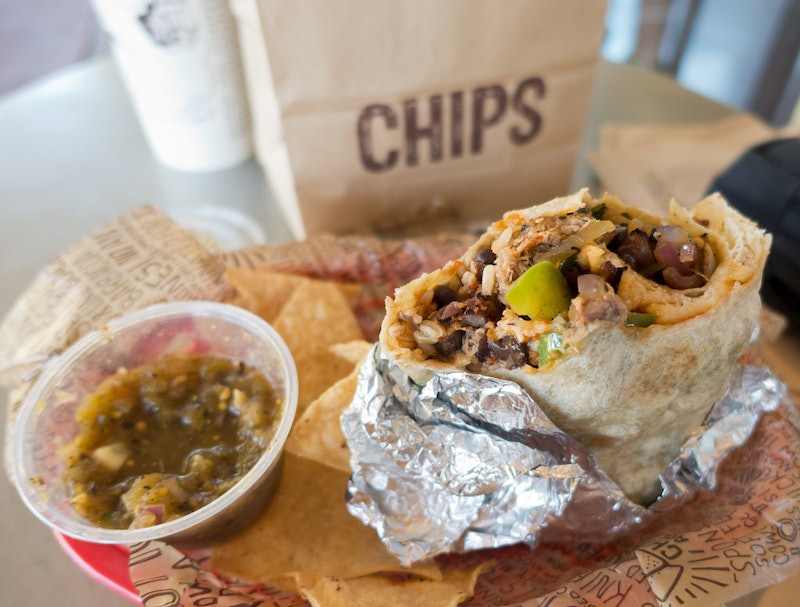 If you're a Chipotle fan and a natural food lover, you're going to love the latest news to come from this Mexican fast casual chain. Chipotle is cutting ingredients in their tortillas to make them healthier and more like the kind you'd make at home. a homemade tortilla recipe only requires four ingredients to make: Flour, salt, oil, and water. Chiptole's current standard tortilla, however, has 11 ingredients, including flour, water, whole-wheat flour, canola oil, salt, baking soda, wheat bran, fumaric acid, calcium propionate, sorbic acid, and sodium metabisulfite. The chain is now going to reduce its tortilla ingredients down to the four found in homemade tortillas, making this new version a lot less processed.

Chipotle has partnered with The Bread Lab at Washington State University to create their new tortilla, although it might be a while before we see it (it's still in the development phase right now). The idea is to make the tortilla as reminiscent of home cooking as possible, without losing the ability to mass produce the product. Chipotle uses more than 800,000 tortillas every day in its restaurants, which means that these tortillas need to be made as efficiently as possible. For the curious, that comes out to a mind-blowing 292 million tortillas a year. Impressive, no?

One of the reasons Chipotle's current tortilla has so many additives is to keep the shelf life of the flatbread intact. Now, though, they want to raise the bar in terms of nutrition — but without sacrificing either the shelf-life or the turnaround in production. “Not only did we need to change ingredients, we needed to get most of them out,” founder of Chipotle Steve Ells told the New York Times. “We also would have to go back to the tortilla bakery and really change the whole way tortillas are made en masse," he added.

Not only is Chipotle taking on this challenge, but they're adding in a twist, as well: They're only going to be using whole wheat flour in these new tortillas to maximize their nutritional value. Dr. Stephen Jones, president of the Bread Lab at WSU, says that this has made this task even more challenging for them. "The skilled baker can make the perfect anything with white flour. Whole wheat is more challenging," he told the New York Times.

The project has been going on quietly for years now, first piloted when Chipotle sought to remove GMOs from their food. Steve Ells explained why this sparked the interest for overhauling their tortilla recipe to the New York Times. “Someone said, ‘Steve, we have to source new cornstarch for the tortillas’ — most cornstarch comes from genetically modified corn," he recalled.

They've also enlisted the help of graduate student Bethany Econopouly, whose research has helped to inform the Clif Bar Family Foundation, making her a nutritional force to be reckoned with. She is currently testing over 100 varieties of whole wheat flour for production of the tortillas and working specifically with varieties that are light in color. This will make it less likely that people will know the tortillas are made with whole-wheat flour — "So people who are naturally averse to whole wheat are less aware of them," she told the New York Times.

The team at the Bread Lab continues to work hard to develop the perfect recipe for the new Chipotle tortillas. Once they have a viable formula that is proven to work in small batches, they're going to increase production size and then take them to market. “As we prove that’s successful, we’ll expand until we’re supplying the whole region with tortillas, and then move on to the next region," Ells says of the Chipotle tortilla rollout. Let's all hope they perfect the recipe soon, so we can feel good about the nutritional value of the burrito choices we're making.