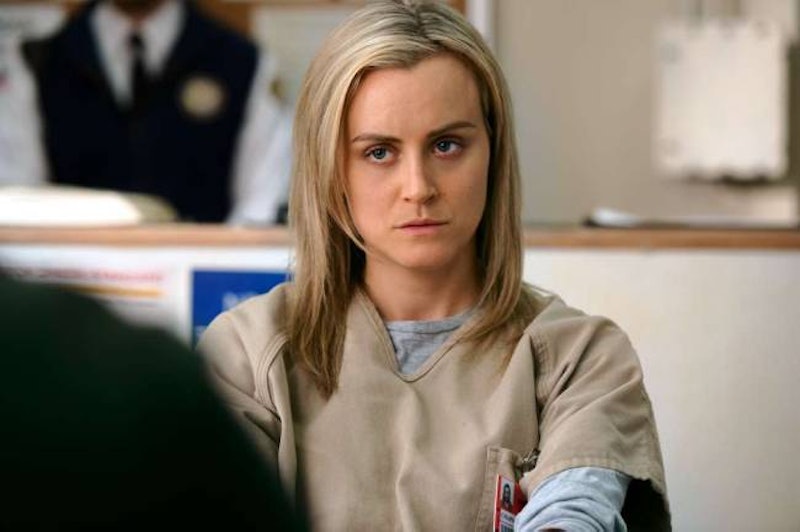 Orange is the New Black was more overt in Season 3 about its politics. Over the course of 13 episodes, the show explored the inhumanity of private prisons, and discussed how the corporate power structure compromises inmates' well-being, with untrained staff given responsibilities and failing to keep them safe. In the second half of the season, we see Piper assigned to work making underwear for Whispers for a dollar an hour, while the corporation profits off her labor. While such a thing makes us very sympathetic to Piper (and the other inmates sharing her fate), this season also saw Piper become the villain of Orange Is The New Black — quite a change from the woman who started out afraid of, or trying to make nice with, nearly every inmate around her.

The aspect of the show that is most indicative of the absurdity of prison policy is the evolution of Piper's character. If serving jail-time is supposed to punish a prisoner, and rehabilitate them so that, when they return, they will no longer be a threat to society, the system has totally failed Piper, because it made her an even worse person.

Yes, Piper has gotten even worse. At first, she was criticized by fans for being so obnoxiously hipster, remarking that prison shoes look like Toms and telling Larry to keep her website updated while she's away. She used to be motivated by "justice" in the prison walls, but has now just turned stone cold (basically, the opposite of what she said she was in Season 1).

Piper's evolution from WASP-out-of-water to leader of a prison gang is crucial in both the narrative and the greater politics of the show. Piper's character was initially developed to be an audience surrogate: she is the lens through which we experience this new world of the women's prison, her outsider status similar to our own. But, with every season, Jenji Kohan and the writers broaden the lens beyond Piper to look more intricately into the backstories and lives of the other women. The rich, entitled WASP once at the center of this world is no longer the focus, which enables us to learn about the other characters for who they are and not just from this white lady's perspective.

All the downtime and navigating the internal politics of prison have forced Piper to be cunning and manipulative, but, while it first started out as a survival instinct, Piper started manipulating the system and others for her own personal gain. At the end of Season 2, Piper sets up Alex to violate her parole so she will be sent back to Litchfield, as both revenge, and because she "missed her." The selfish behavior only escalates from there, with Piper starting her used-panty business, first trading "vag sweat" for flavor packets, and punishing Flaca as a display of power when she undermines her.

Piper's growth over the years — and the character's evolution into narcissism and gratuitous crime — makes Piper like a female Walter White. Like Heisenberg, she was first a criminal to survive, but is now clearly intoxicated by the power, and will stop at nothing to get what she wants. Piper is like Walter White not in the scale of her crime, but by how much she has hardened since the pilot. It may be panties instead of meth, but Piper's trajectory from where she started is growing just as stark as Vince Gilligan's famous "Mr. Chips-to-Scarface" paradigm.

Like that of Season 2, the Season 3 finale ends with Piper setting up a lover to be kept in prison, for revenge, and for what Alex calls being a "sex cow." She hides a shank made of jolly rangers, weed, and a stolen screwdriver in Stella's bunk, and gets her sent to max.

More like this
Here’s Everything Coming To & Leaving Netflix In June
By Alyssa Lapid
'Heartstopper's Kit Connor Revealed His Hopes For Season 2
By Nola Ojomu and Sam Ramsden
'Gentleman Jack’s Cast & Crew Are Keen On Season 3, Too
By Frances Stewart
'Ghost In The Shell: SAC_2045' Was Only Supposed To Last Two Seasons
By Kadin Burnett
Get Even More From Bustle — Sign Up For The Newsletter