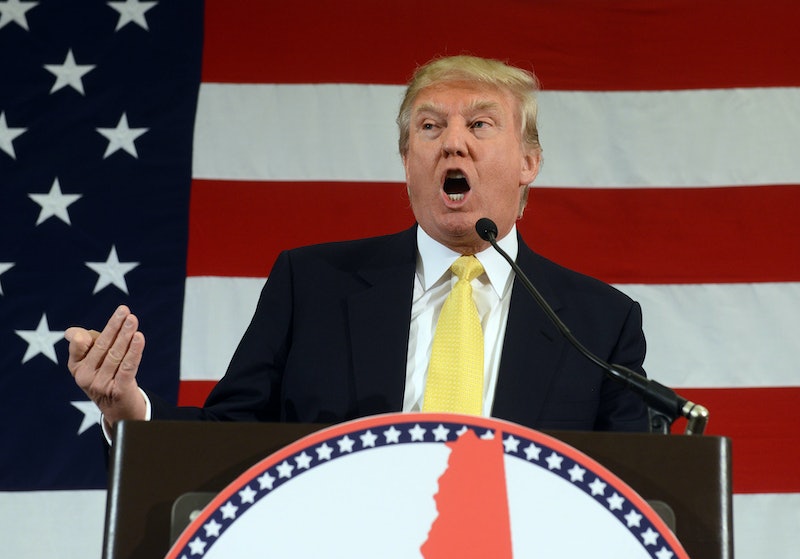 Well, the fateful day is finally upon us — businessman, reality TV star, and braggadocio enthusiast Donald Trump is running for president, finally living up to the years of hinting, teasing and leading-on. If it comes as a shock to you, you're forgiven, as Trump has flirted with runs numerous times before, including in 2008 and 2012, and this is the first time he's actually jumped in it. Which could be because he's got a laundry list of controversial statements in his past — here are 16 Donald Trump quotes that prove he's no president.

Whether voiced in print, in any of his frequent speaking appearances, or on his oft-testy Twitter account (if he hires a real campaign manager, they're going to do have to do something with that), Trump has never been shy about blaring his beliefs.

Some of the comments in his record are, to put it lightly, not the sorts of things any other candidates will have to deal with, at least not to nearly the same extent. Here's a slew of times Trump managed to convince us all this day would never come, because what kind of person with sincere political ambition goes around talking like this?

Speaking in Las Vegas in 2012, Trump gave his take on how to keep oil prices low for American consumers: just curse out OPEC! The real crux of the problem, in his words: "We have nobody in Washington that sits back and said, you're not going to raise that fucking price."

Donald Trump ceded an enormous amount of political credibility in 2012, when he began indulging in the birther movement, claiming he'd sent investigators to Hawaii in the hopes of exposing President Obama as not having been born in the United States.

Amid the tumult of the Libyan civil war in 2011, Trump attempted to burnish his pro-America, tough guy image by reminding everyone that he once charged Muammar Gaddafi to rent a plot of land, then refused to let him use it under public scrutiny.

A tip for any politician entering the national stage, especially a novice like Trump is — you can't be getting embroiled in a back-and-forth fracas with a popular comedian.

Case in point: Trump once filed a lawsuit against HBO host Bill Maher, effectively arguing that Maher had to pay Trump $5 million for joking that his father was a chimpanzee.

This one came from his announcement speech on Tuesday, so there's no arguing that he didn't know he was running when he said it. So, candidate Trump, what's your plan for China?

Trump isn't so sure that the President is being square with the American people on matters of faith — despite his annual participation in the National Prayer Breakfast, among countless other examples, Trump believes that President Obama might be Muslim.

He may have one but there's something on that, maybe religion, maybe it says he is a Muslim. I don't know. Maybe he doesn't want that. Or he may not have one. I will tell you this: if he wasn't born in this country, it's one of the great scams of all time.

Trump's habit of getting into rude grudges with high-profile people probably doesn't bode well for the rigors of a political campaign, as evidenced by his infamously hostile attitude towards comedian Rosie O'Donnell.

Trump has frequently lambasted O'Donnell since she criticized him on-air nearly a decade ago — he called her "a slob" and "disgusting," among other things, to The Insider back in 2006.

Rosie O'Donnell's disgusting both inside and out. You take a look at her, she's a slob. She talks like a truck driver, she doesn't have her facts, she'll say anything that comes to her mind. Her show failed when it was a talk show, the ratings went very, very, very low and very bad, and she got essentially thrown off television. I mean she's basically a disaster.

9. Trump On Media Scrutiny Of His Business

Trump lashed out on Twitter at a British documentarian covering a land development plan he's been pushing for in Scotland. Now, nobody has to enjoy criticism, obviously. But some people might respond a little more presidentially than this.

This one is a clearly provoked back-and-forth, but it does exhibit pretty well how Trump lacks self-awareness of his own reputation. After sports website Deadspin (part of Gawker Media) broke the bizarre story of former Notre Dame linebacker Manti T'eo's fabricated girlfriend, Trump congratulated the website on Twitter, and got a simple response.

Needless to say, he didn't take it very well.

As far as the intersection of race, politics and social justice is concerned, well, it's probably not an ideal area for the man often called "The Donald" to wade into. Take, for example, his wildly offensive tweet about Baltimore in the aftermath of the death of Freddie Gray.

No issue is too small for Trump to turn his keen eye towards — he advised Robert Pattinson to dump Kristin Stewart, claiming he was sure she'd cheat on him.

Yet another bad-taste attack on a prominent woman — Trump called Huffington Post founder Ariana Huffington "unattractive both inside and out" in a 2012 tweet.

Not only does Trump apparently have a lot of trust in the integrity of New England Patriots quarterback Tom Brady, he also took the opportunity of the Deflategate scandal to get in a little shot at Hillary Clinton.

Trump was characteristically confident in joining the chorus of people — many of them conservative critics of the Obama administration — who called for Ebola volunteers to be barred from reentering the United States, a stigmatizing position in sharp disagreement with the White House and the CDC.

Seeing as a few of these already have been examples of random, crude attacks on public figures, why not go out with one more? Ostensibly a tweet about opposing political correctness, you get the sense that Trump just wanted everybody to know that he thinks Bette Midler is ugly. in fairness, he was responding to her mocking his infamous hair, but regardless of the reason, "Twitter beef" is a phrase you don't want tossed around so often with a presidential candidate.

Wonder how millennials would like to make America great again? Check it out...