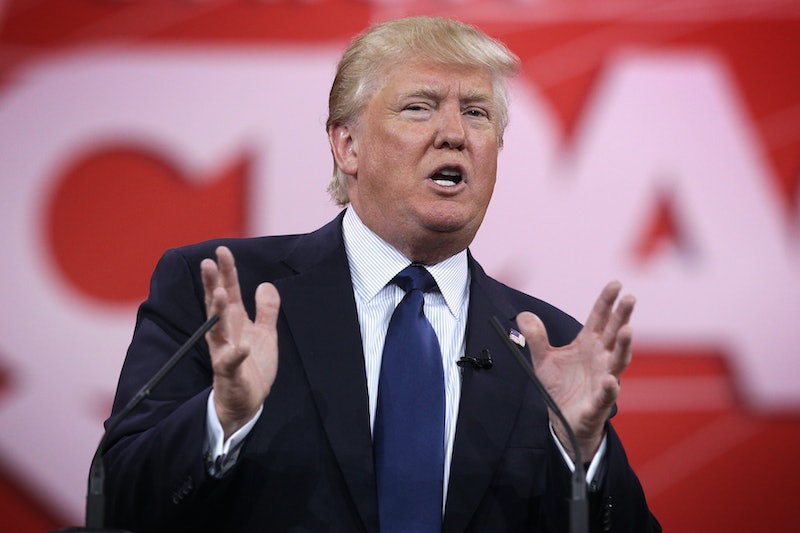 We all thought the Republican Party was going to cap its candidacy field at Jeb Bush, but just kidding! The GOP always has room for one — or two, or three — more candidates. This week, that unsolicited candidate is business giant and TV personality Donald Trump, who's making his first presidential bid after years of talking about how to run the country. While Trump has zero political experience, he does have one thing in common with many Republican politicians of the 21st century: Trump knows how to make a sexist statement, and he does it again. And again. And one more time, for good measure.

Now, Trump's sexism is no secret. The real estate mogul has never lived by the "If you don't have something nice to say..." maxim, even when the cameras are rolling. Since living in a world with Twitter, Trump has used the social media platform to attack women who dare to disagree with him or call him out. He even attacked Cher (Cher!!) in 2012, telling her she should stop "playing around with surgery" and let the men do the whole talking about politics thing.

Fortunately for us, Trump has been in the public eye for so long that there's a nice, long, well-documented trail of his horrible comments about womankind that we can pull out between now and November 2016 — kidding, Trump will never get far.

Here's some of the most egregious statements made by Donald Trump...

Beauty and elegance, whether in a woman, a building, or a work of art is not just superficial or something pretty to see

Well, at least he pointed out that we weren't the superficial ones.

2. On A Woman's Place In The Boardroom

In a 2013 episode of Celebrity Apprentice: All-Stars, Trump made a rather vulgar joke about former Playboy model Brande Roderick performing oral sex on men to stay in the game because, really, isn't a woman's place in the boardroom on her knees? The exchange occurred when fellow contender Bret Michaels told Trump that at one point, Roderick "got down on her knees and passionately said, ‘I want to do this.'" Trump took that to mean...

Trump: “Excuse me, you DROPPED to your knees?”

Trump: "It must be a pretty picture, you dropping to your knees."

3. On What Type Of Women He Looks For In Business

Trump has made it known on The Apprentice that he has one type of female colleague in mind: Young, hot and open for business. Many of the show's former female contestants have protested Trump's overt sexism and demoralizing treatment of women on the show, but one of the most tellingly misogynist comments is when he told a female contestant: "I bet you make a great wife."

But just a wife. Not a businesswoman and wife — that doesn't exist, obviously.

4. On His Daughter, Ivanka

Trump can't help but comment on every woman's appearance — even his daughter isn't safe:

I don’t think Ivanka would do that [pose for Playboy], although she does have a very nice figure. I’ve said if Ivanka weren’t my daughter, perhaps I’d be dating her.

Ew. His PR rep later clarified the incestuous declaration as a joke "making fun of himself for his tendency to date younger women." Women young enough to be his daughter, apparently.

5. On How To Shut Down Criticism

One of Trump's worst moments may be his 2006 feud with Rosie O'Donnell, who criticized Trump for his support of Miss USA 2006 Tara Conner. Following the pageant, which Trump runs, Conner was found to have partook in underage drinking and drug abuse — a huge scandal for the pageant circle's squeaky-clean image.

Rosie O'Donnell is disgusting — both inside and out. If you take a look at her, she's a slob. How does she even get on television? If I were running The View, I'd fire Rosie. I'd look her right in that fat, ugly face of hers and say, "Rosie, you're fired." We're all a little chubby but Rosie's just worse than most of us. But it's not the chubbiness — Rosie is a very unattractive person, both inside and out.

More like this
Watch Jacinda Arden’s Devastatingly Honest Resignation Speech
By Sam Ramsden
What The UK Blocking Scotland’s Gender Recognition Bill Means
By Sam Ramsden
'The Queen’s Gambit' Season 2 Tweet Wasn’t From Anya Taylor-Joy
By Mary Kate McGrath, Jack Irvin and Grace Wehniainen
10 Primal Movement Exercises That'll Improve Your Mobility
By Carolyn Steber
Get Even More From Bustle — Sign Up For The Newsletter
From hair trends to relationship advice, our daily newsletter has everything you need to sound like a person who’s on TikTok, even if you aren’t.