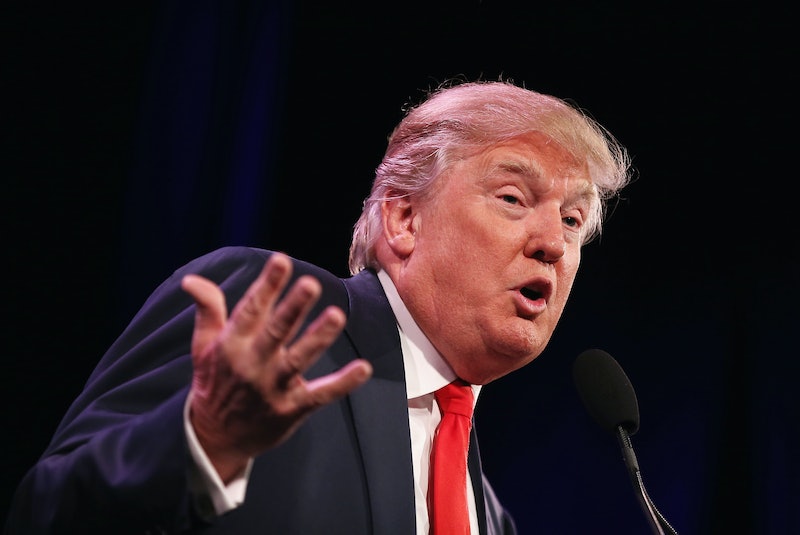 The 2016 election got truly absurd on Tuesday: Donald Trump became the 12th Republican hopeful to join the race. Trump doesn't really have any experience with politics (like, at all), but he does have business experience and a longstanding history as a bit of a chauvinist. Trump's quotes about women say a lot about what his stance is on women's rights issues— so here's what would happen if Trump's sexism actually became policy.

From his stabs at celebrity women for their looks to his outright assertion that attractive women are like works of art or pretty buildings, Trump isn't exactly a feminist champion. He's anti-choice and he said he would support a ban on abortions after 20 weeks. As owner of the Miss United States pageant, appearances are very important to Trump.

In 2000 Trump teased a presidential run, and at the time allegedly said, "I think the only difference between me and the other candidates is that I'm more honest and my women are more beautiful," according to Ken Lawrence's book on Trump. Because, you know, women are something a man can own, and their looks automatically give them value, so pretty women are more valuable to men, who want to own pretty things. Yep.

Here's just what could happen if Trump became president and his quotes about women and women's issues actually became real life.

However, he has spoken publicly about his views on women and their merits. In his book his book, Trump 101: The Way to Success, he said:

Beauty and elegance, whether in a woman, a building, or a work of art is not just superficial or something pretty to see.

But, then, how are women like buildings and art? Look out, ladies of the White House. If Trump becomes president and you're a woman, you better be able to prove that you would make a great wife if you want a government position.

In 2007, Trump talked about an apparent fight between Angelina Jolie and her father. He told Larry King, "She’s been with so many guys," and then said "I just don’t even find her attractive." Because one of the most well-known actresses and philanthropists in the world was definitely looking Trump's validation.

It gets even worse. In the same year, he singed a deal with Fox to develop a television show called Lady or a Tramp where he would teach "out-of-control young women" to be more debutante-like, according to Variety. Trump would've evaluated their progress throughout the show. Thank God it never got the green light.

But, wait, it's totally OK to be your flirtatious and sexual self outside of the bedroom — only if its with Trump himself. In 2004, Trump said the women on the show were hired for their intelligence, but that they also "turned out to be beautiful, and that's not so bad," according to Jezebel:

All of the women on ‘The Apprentice' flirted with me — consciously or unconsciously. That's to be expected.

In 2006, Rosie O'Donnell criticized Trump for his support of Miss USA 2006 Tara Conner, who got in trouble for underage drinking and drug abuse. Trump fought back — but he didn't fight her arguments. He only stuck to insults that are skin-deep, like calling her a "fat pig," according to Jezebel:

Rosie O'Donnell is disgusting — both inside and out. If you take a look at her, she's a slob. How does she even get on television? If I were running The View, I'd fire Rosie. I'd look her right in that fat, ugly face of hers and say, "Rosie, you're fired." We're all a little chubby but Rosie's just worse than most of us. But it's not the chubbiness — Rosie is a very unattractive person, both inside and out.

He did the same thing to Cher in 2012 when she criticized presidential candidate Mitt Romney. Cher tweeted "If ROMNEY gets elected I don't know if I can breathe same air as Him & his Right Wing Racist Homophobic Women Hating Tea Bagger Masters," according to Jezebel. She has since removed the tweet. Trump, who supported Romney at the time, tweeted back "@Cher should stop with the bad plastic surgery and nasty statements about good people running for office."

Lesson learned: If Trump actually won the election, women would only get to have an opinion about politics or current events if they're attractive.