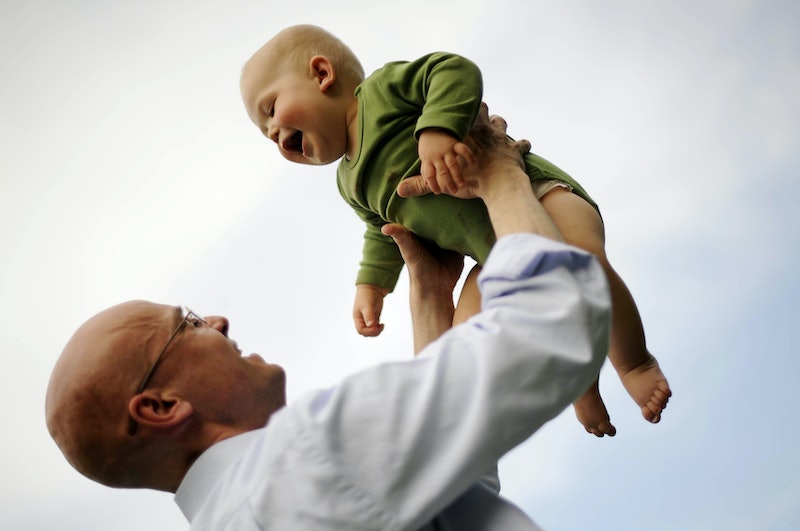 While the U.S. still doesn't have guaranteed maternity leave for working mothers, 47 percent of countries worldwide have some type of paid paternity leave for new fathers. How is America so far behind? On Tuesday, I attended the unveiling of "The State of the World's Fathers" (SOWF) report at the United Nations headquarters in New York, a paper that argues that paid paternity leave is essential to achieving gender equality. Giving dads time off work helps evenly distribute childcare duties and allows women to take care of their health, earn more money, and maintain their careers. Although the report points out that not many countries take paternity leave very seriously, much of the world is still ahead of the U.S. in this arena.

Ranging from one day of paternity leave to 90 days, almost half of the world's nations offer new dads paid time off to care for their children. As the opening speaker at the SOWF event Tuesday, Chelsea Clinton said:

The report makes such a strong and powerful case for why paid paternity leave sends a strong philosophical message that parents have an equal stake in nurturing and raising of the children, from not only the early days, but the early weeks and the early months.

The SOWF study, released by the global fatherhood campaign MenCare, says providing leave for fathers is proven to even out the distribution of household work — in the U.K., fathers who took time off after the birth of a child were 19 percent more likely to help with feeding and getting up in the middle of the night with the baby.

Paternity leave also helps improve the health of new mothers who have time to take care of themselves and allows mothers to work outside the home more and increase their incomes. The SOWF report says, "Leave for fathers also appears to lead to improved maternal health, including mental health, and reduced parenting stress," citing that mothers’ absence from work due to sickness was reduced by five to 10 percent in Norwegian families where fathers took longer leaves. It points out that more research is needed on the affects of paternity leave on mothers' incomes, but a study from Sweden shows that when fathers took leave, mothers made almost 7 percent more money over the next four years, which is more than they lost by taking time off themselves. "If it is not also taken by fathers, long parental leave periods can negatively affect women’s return to the workplace, and they can discourage employers from hiring or promoting female employees," the report says.

According to the report, even when paternity leave is offered, men usually don't take advantage of it unless they're paid at least 50 percent of their wages. "Men’s persistent pay advantage over women means that fathers’ use of leave most often represents a greater drop in total family income than when mothers take these days. This is a major reason that it is mainly women who take leave," says the report. This keeps women in a cycle of working less and making less money, and in order to break the cycle, we need proper paid maternity and paternity leave.

Even though paternity leave isn't guaranteed by law in the U.S., corporations could still offer it to employees themselves, but many don't. While speaking on the panel at the unveiling of the report, Michael Sneed, vice president of global corporate affairs for Johnson & Johnson, said he thinks most corporations don't offer leave for fathers because they haven't caught up with modern times yet. He said: "I think it’s based upon misconceptions and outmoded thinking." At Johnson & Johnson, fathers now get 9 weeks of paid leave. "We want to raise strong families, we want to make sure the family unit, however it’s comprised, has time as a family," Sneed said. The report even says that providing family leave for mothers and fathers is good for business because it improves employee retention, reduces turnover, increases productivity and morale, and reduces absenteeism and training costs.

Perhaps the largest problem with not providing leave for fathers is that it strengthens conventional gender norms and societal beliefs that women are meant to be the main caregivers of their children. The SOWF report says:

The design of paternity, maternity, and parental leave provisions reflects national or cultural priorities about the raising of children, about the availability and desirability of childcare, about family life and welfare, about individual choice, about women’s participation in the labor market, and about gender norms and the feminist and fatherhood movements that demand change. Indeed, depending on the design of leave policies, they can promote gender equality or reproduce inequality, as is the case when only women are permitted or encouraged take parental leave.

Paid time off for dads is helping break down gender stereotypes around the world, and it's time the U.S. caught up.