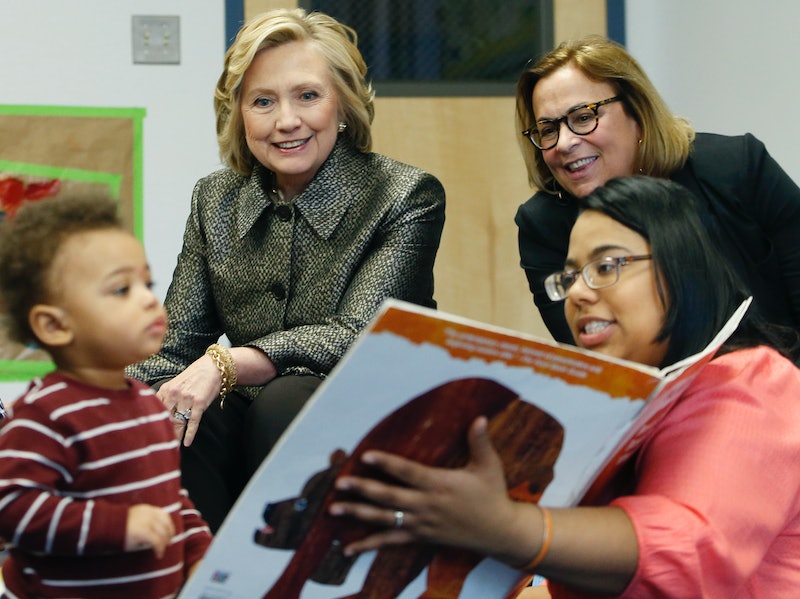 The 2016 presidential candidates have already started outlining some of the biggest issues on their minds. On Monday, Hillary Clinton spoke about pre-kindergarten education access for low-income families. She proposed that the federal government provide the funds to give families of low or moderate means the ability to send their children to preschool. She laid out her plan for investing in the future of American children, then took the time to read The Very Hungry Caterpillar to a group of children at a Rochester, New York, Y.M.C.A. Because she seemed so popular with the kids, maybe she should invest in an illustrated children's book to promote herself.

Clinton proposed a middle class tax cut that could go toward paying for quality child care. According to the National Association of Child Care Resource and Referral Agencies, the average cost of preschool ranges from $4,460 to $13,158 per year. In New York City, the cost of a top preschool is comparable to college tuition, reaching up to $38,500, according to Business Insider. In addition, research by the National Institute for Early Education says that enrollment in state-funded pre-K programs increased by more than 100,000 from 2002 to 2005. Clinton's fight to resolve this issue could be the perfect inspiration for new campaign materials.

The issue that Clinton has taken on right now is a serious one. To promote it — and her 2016 presidential campaign — she should try a new medium: a children's book. If Hillary could get her marketing team to write a book that tells the story of her journey to the White House, here are eight things it should have:

Once upon a time, there was a wonderful heroine who only wanted gender equality and lots of other good things for all the boys and girls of her country. However, she had to get elected as their leader (because democracy is a good thing, kids).

Every great heroine needs a sidekick. Maybe Bill or Chelsea could sub in to be the Wilbur to Hillary's Charlotte or the Tigger to her Winnie the Pooh. Clearly, they'd have to be in animal form, and the book wouldn't say that Bill is actually Hillary's husband. This story isn't about romance.

Oh, which one to choose? Marco Rubio? Jeb Bush? Carly Fiorina? Or the newly announced Donald Trump? They've all criticized her harshly. Maybe it should be a rotating villain system? They'd all wear black capes and make up fake names like Lord Voldemort.

In order to make all of her dreams for peace and prosperity to come true, Hillary has to get to a beautiful castle in the story. But many obstacles, like discrimination, attempt to get in her way. The book would double as a way to teach about equality.

Every great kids' book has obstacles other than just the villain. The heroine could face a giant monster named the Patriarchy or a swarm of red foxes who tear apart her clothing choices and say she looks 92 years old. Neither of those metaphors are very subtle, but things like that tend to go over children's heads.

They could bring in Dr. Seuss or Jay-Z to do the rhymes for this book. The heroine's name was Hillary/She had a political artillery. She's more sabre-toothed tigress than kitten/and so much more than just married to Clinton. She's doing so much for women/and now we're totally smitten.

Adults will really only read this anyway, so it's probably OK to show Hillary destroying her competitors with a little PG-13 violence. The presidential debates could be portrayed in the form of a battle with nunchucks and ninja stars.

Yes, of course our Hillary makes it to the White House through sheer force of will and determination. She can overcome any obstacle she sets her mind to defeating. She and her sidekicks will move into the castle at the end of the race at last. Now, she can help all the little boys and girls in need of access to affordable preschools and stable infrastructure system upgrades.

More like this
Watch Jacinda Arden’s Devastatingly Honest Resignation Speech
By Sam Ramsden
Prince Harry Incorrectly Recites Christina Aguilera’s “Genie In A Bottle” Lyrics
By Jake Viswanath
Eurovision Has Been Given A Whole New Look Ahead Of Its Liverpool Debut
By Bustle UK
Man Meets Politics: ‘Boy Meets World’ Star Ben Savage Is Running For Congress
By Jake Viswanath
Get Even More From Bustle — Sign Up For The Newsletter
From hair trends to relationship advice, our daily newsletter has everything you need to sound like a person who’s on TikTok, even if you aren’t.