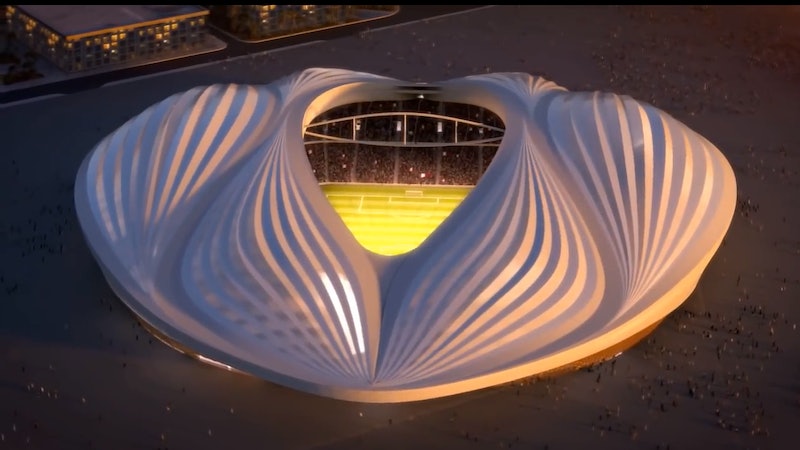 Tee hee hee. After Qatar unveiled designs for its brand-new 2022 World Cup stadium, the Internet took notice — and collectively guffawed. It's pretty hard to miss that the Al-Wakrah sports stadium bears a pretty close resemblance to, well, a vagina: a majestic, modern, white vagina capable of holding more than 40,000 people, nonetheless. The new stadium, created by technology firm AECOM and noted architect Zaha Hadid, is one of six stadiums being developed for the sports complex, located about 10 miles away from the capital city of Doha.

Ever since Qatar claimed the 2022 World Cup, the Arab state has been beset by issues that aren't quite as funny. The World Cup is set to take place between June and July, which happens to be when temperatures can reach 120 degrees in Qatar. Though the stadium has a cooling system, FIFA doesn't exactly think it'll be sufficient, and has been angling to move the World Cup to the winter months. Oh, and the state is facing accusations that its World Cup migrant workers are being withheld food and water — not to mention widespread belief that Qatar's winning bid was inherently corrupt.

Still, Qatari officials pressed on, and now the soccer world is finally seeing the fruits of their labor: A giant, hot depiction of female genitalia. Officially, of course, the stadium is supposed to be "inspired by a traditional fishing boat, but with a cooled pitch." The design is meant to show the waves on either side of the boat. Um. Does this look like the stadium to you?

Over at The Guardian, Holly Baxter is in favor of embracing the stadium's undertones, intentional or not. (Even though she mistakenly believes the "bigwigs" behind the design are all male. For the record, architect Zaha Hadid is very much female.)

The Qatari stadium's resemblance to a woman's private parts may be unintentional, but I for one applaud it ... In a world where sport and vaginas very rarely come together with such prominence (see every UK female footballer's salary versus every UK male footballer's salary), this can only be a good thing. And after all, why not have 45,000 people crammed inside a woman's reproductive system? It's not like they haven't been there before.

Still, this is far from the first time a modern structure has been mocked for resembling genitalia. Just look at London's 30 St Mary Axe, known as "the Gherkin."

And then there's Chicago's Crain Communications Building, referred to as "The Vagina Building."

Plus, Jimmy Kimmel recently ran a segment on Bejing's People's Daily Building, trying to get little kids to say that it looks like a penis.