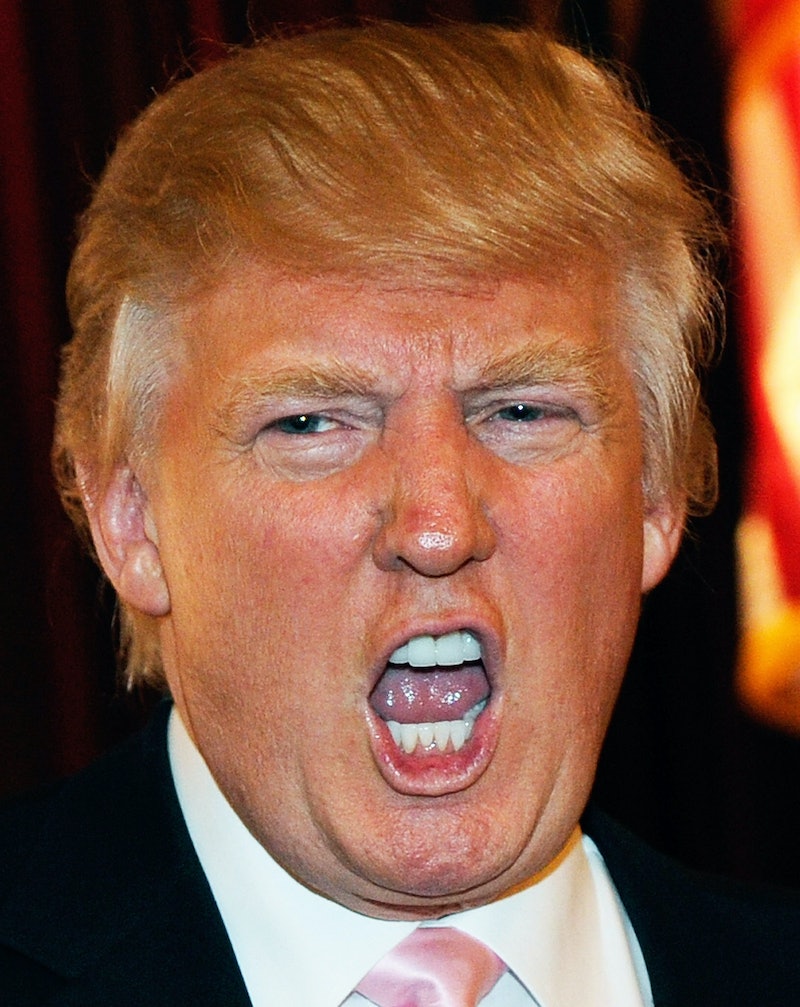 Donald Trump announced he's running for president (again), and already people have stepped out in hordes to voice their very strong opinions on The Donald. On Tuesday, Neil Young's "Rockin' in the Free World" blasted as Trump stepped on stage to announce his candidacy. Turns out, Young is not a fan of Trump, and there are plenty of other famous people whose votes Donald Trump probably won't get because the mogul has a knack for rubbing people the wrong way.

In an embarrassing reveal, Trump apparently didn't have the right to use the 1989 rock anthem (whose lyrics actually were intended to rip a Republican presidency led by George H.W. Bush for not giving two sh*ts about the poor). A statement issued to USA Today by Young's rep Rick Gershon said the famed singer-songwriter actually is throwing his support in the opposite direction.

Donald Trump was not authorized to use Rockin’ In The Free World in his presidential candidacy announcement. Neil Young, a Canadian citizen, is a supporter of Bernie Sanders for President of the United States of America.

Young can't vote, since he's a Canadian citizen and all, but over the years, Trump has pocketed a number of famous feuds. While you won't know for sure which candidate someone actually chooses in the ballot box, chances are these high-profile folks won't be checking an X next to Trump's name.

In 2012, Trump tweeted a down-and-dirty dig at Huffington Post founder and Editor-in-Chief Arianna Huffington and her divorce from former California congressman Michael Huffington in 1997. A year after the couple ended their marriage, Michael publicly disclosed he was gay. Trump, who reportedly was upset with a Huffington Post piece titled "Donald Trump: Why So Moody?" which took a look at, well, why the Trump was being so moody. Seems like Trump lived up to that reputation with this stellar tweet.

During the 2012 elections, Trump blasted Cher as an "average talent" because she didn't support then-presidential candidate Mitt Romney. So naturally, without any provocation, Trump had to bring Rosie O'Donnell into the mix. Trump and O'Donnell have long had a contentious history, with the businessman at one point even attacking her weight.

Trump and Mark Cuban have repeatedly gone tit-for-tat on our favorite window into celebrity stream-of-consciousness: I'm talking about Twitter, of course. From million-dollar bets to shave heads for Hurricane Sandy relief, to Dallas Mavericks shade and Shark Tank/Celebrity Apprentice head-to-heads, the battle of who's richer is pretty exhausting for us common people, but these Twitter battles are, to be honest, such a great read.

After Bette Midler accused Trump of "ruining New York" and referred to the mogul as "60 shades of stupidity" via Twitter, Trump unloaded a tirade on the legendary singer. In less then six minutes, Trump blasted everything from Midler's looks, persona, and singing and claimed she was trying to "become relevant again" by getting in on the "Trump act."

Robert De Niro has already declared he will throw his support to Hillary Clinton, but back in 2012, he was an avid President Obama supporter. So, remember Trump's crusade to unearth POTUS' birth certificate, which the real estate mogul believed would reveal Obama was actually not born in Hawaii? Yeah, we didn't either, and Robert De Niro was an outspoken critic of those birth-doubters, who he later said included Trump. On "Fox and Friends," Trump called in and said De Niro was a good actor but we're not dealing with "Albert Einstein."

Rapper Waka Flocka Flame, who announced on 4/20 that he's also running for president, kept his true feelings for Trump short and sweet.