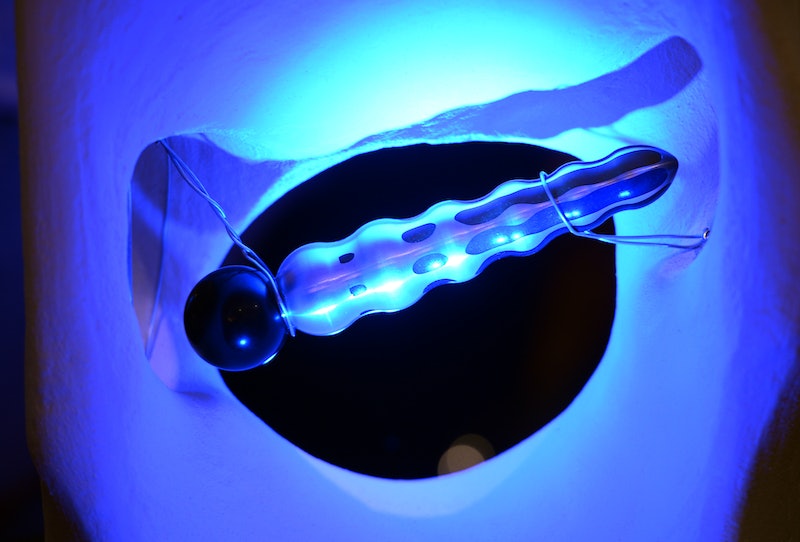 A recent news story gives a completely new meaning to the term "weapon of choice." According to CBS Pittsburgh, a man allegedly robbed a bank with a sex toy and phone wrapped in duct tape, further proof that your vibrator is the most diverse thing you own. After Aaron Stein was arrested he revealed that the "bomb" he had threatened staff with actually wasn't a bomb at all, although it apparently looked convincing enough to fool bank employees. Crafton Police Chief Mark Sumpter told CBS Pittsburgh: "He had a mask on, said he had a bomb, displayed some wires hanging out from underneath his shirt."

Because of the level of the perceived threats "roads were shut down and the bomb squad deployed when police pulled him over as a precaution." I get that it's better to be safe than sorry, especially with something as potentially violent as a bomb, but I'm also a little confused — if you were going to cover it in duct tape, why did it have to be a sex toy? Brand loyalty? I was also surprised to learn that while this may be one of the most severe crimes to involve a sex toy, it is by no means the only one.

Here are some of the funniest sex-toy related crimes that I found, because apparently it's a thin line between pleasure and pain, and sex toys cover both:

1. The Sex Toy Used For Protection

Sex toys don't always have to be a center of a crime, apparently they are a form of self defense. Carolee Bildstein allegedly used a "clear, rigid feminine pleasure device" to beat a cop who was trying to arrest her, according to Gawker. Terrifying. Terrifying and painful.

2. The Sex Toy Kept in the Family

3. The Sex Toy Camouflaged as a Baby

Not that Bradley Cooper, but the name confusion made the story go viral. A 19-year-old in England who shared the famous actor's name allegedly tried to steal a "vibrating sex toy" from his local Tesco supermarket, according to The Mirror. Who knew you could buy sex toys at Tesco? I guess sometimes you want your produce and vibrators in the same place. Silly Bradley Cooper.

More like this
We’ve All Had Bad Sex. Nona Willis Aronowitz Is Talking About It.
By Sophia Benoit
Dunkin’s Pumpkin Spice Latte Is Officially Back This Week
By Mia Mercado
Kim Kardashian Is Releasing A Line Of Earbuds With Beats
By Alexis Morillo
Is It Bad That I'm Not Interested In Sex Or Dating Right Now?
By Sophia Benoit
Get Even More From Bustle — Sign Up For The Newsletter