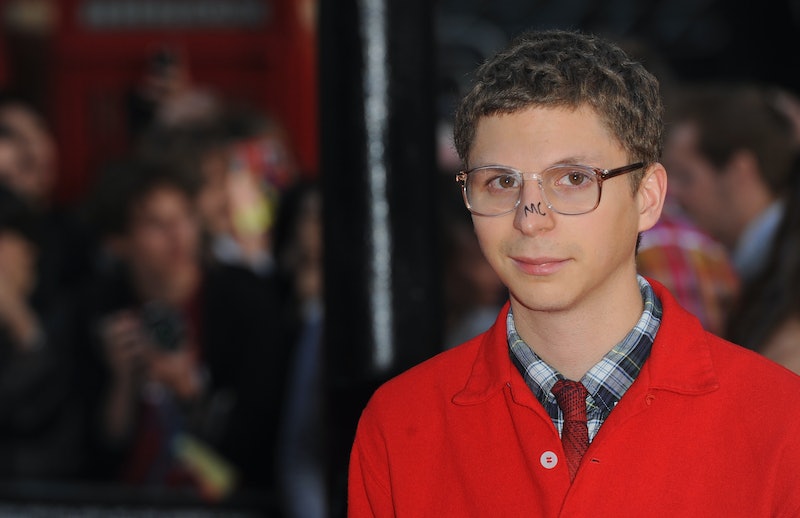 The world is a cruel and awful, awful and cruel kind of place. Because, according to his piece in the New Yorker , Michael Cera received a misplaced text from a guy named Jeremy, and proceeded to have a text-relationship based on banter, mutual respect, and borderline harassment (on Cera's part, Jeremy was the consummate gentleman). Even though The New Yorker informed us that the piece Cera wrote is fictional and did not actually happen, I'm pissed it wasn't me who Cera made the story up about. Despite living in the UK, despite having no one to text in the LA area code, and despite not being mysterious enough to justify Michael Cera's fascination for over a month, I am still somewhat-debating-stomping-my feet-even-though-I'm-in-Starbucks-and-everyone-would-see-me levels of pissed.

If you haven't texted me before, you should know I'm attentive, pithy, and lighthearted at all times. I might even be more fun over text than in person (hence the career in writing *sob*), and I am exactly the type of person to take a Michael-Cera-type figure to a party because why the fuck not. Trust me when I tell you, it would not have taken an entire month for me to get together with my might-be-Michael-Cera-might-be-a-rapist friend, because I'm just wild like that and life is for living and some other "seize the day" type cliches. All of them.

And if we had met, Michael Cera and me, well, who knows. Maybe I would've thrown caution to the wind, cheated on my boyfriend and lived a very sex-filled and pseudo-intellectual life with Michael Cera because for some reason or other I find his lack of chin definition and self-effacing sense of humor bizarrely attractive. Maybe we would've sat in bed listening to the Jeremy Irons narrated audiobook of Brideshead Revisited while feeding each other grapes. Maybe we would've taken calligraphy and sushi-making classes together, throwing our heads back in mirth over his hilarious references to Yeats and his amazing stories of on-set secrets. Maybe we would've had an inside joke to do with how I can never say Michael Cera's first name without saying his last name because they just sound so right together.

But I'll never know if any of those things would've happened because Michael Cera didn't text me, he texted stupid assface Jeremy and now the only way Michael and I will ever have our chance is if I stalk him to L.A, which is unlikely because I really don't have the organization or forethought to be an effective celebrity stalker.

So, in the hopes of him seeing this, and because I'm so frickin' miffed over this missed opportunity, here are the reasons I think I would've been much better suited to being Michael Cera's mystery texting partner. And if this is too needy for him and he never calls me and we never date, well, at least I'll know I tried.

C'mon, Jeremy thought Michael Cera was in Zombieland? Amateur mistake, bro, mistaking Michael Cera for Jesse Eisenberg. Michael, if you're reading this, I would never mistake you for that ass clown Jesse Eisenberg, Jeremy is a stupid, stupid man and I know all the movies you've been in, but definitely not in a weird way. I PROMISE NOT IN A WEIRD WAY. Even Paper Heart. See how dedicated I am?

3) If Michael Cera Wanted To Spend Christmas With Me, That Could Be Easily Arranged Because I'm Jewish and Therefore Wouldn't Have Prior Plans

Sure, I've spent Christmases with friendly goyim, but generally speaking? If Michael Cera hit me up for a Christmas day meet-up, I'd ditch my family with pretty much the rest of our congregation in Chinatown quicker than you could say "I'll have the shrimp fried rice, even though it's traif."

4) I Would Never, Ever Ditch Michael Cera For My Sibling

Honestly, I'd probably sell my own brother to hang out with Michael Cera. Leo, if you're reading this, I'm so sorry man but remember when we used to watch Arrested Development together? This is my one chance at true love, please understand this had to happen. But don't worry, I'd get my bro an awesome Hanukkah gift to make up for it. That would demonstrate to Michael how committed I was to our relationship while also showing that I am a sensitive and wonderful sister.

Although I might not mention the fact that I have a boyfriend, I do know that Michael Cera probably doesn't want to make out with my boyfriend (who would be very taken aback indeed to find Michael Cera's face on his face) and I would have the good sense to never ever introduce Michael to any of my more attractive female friends. Chicks before dicks, except when it comes to Michael Cera, in which case, female friends and family members, if you even look at him I will cut you. I'm dead serious.

And those are the reasons Michael Cera should've made up a story about texting me instead of Jeremy. Text me, Michael!

More like this
Natalia Dyer Just Revealed The Weirdest Thing About Her Charlie Heaton Romance
By Nola Ojomu
Jennifer Lopez Found The Perfect Ben Affleck Throwback Video For Mother’s Day
By Stephanie Topacio Long
Ryan Reynolds’ Mom Hilariously Tests His Patience In A Mother’s Day Video
By Brad Witter
What Does Doctor Strange’s Third Eye Mean?
By Arya Roshanian
Get Even More From Bustle — Sign Up For The Newsletter