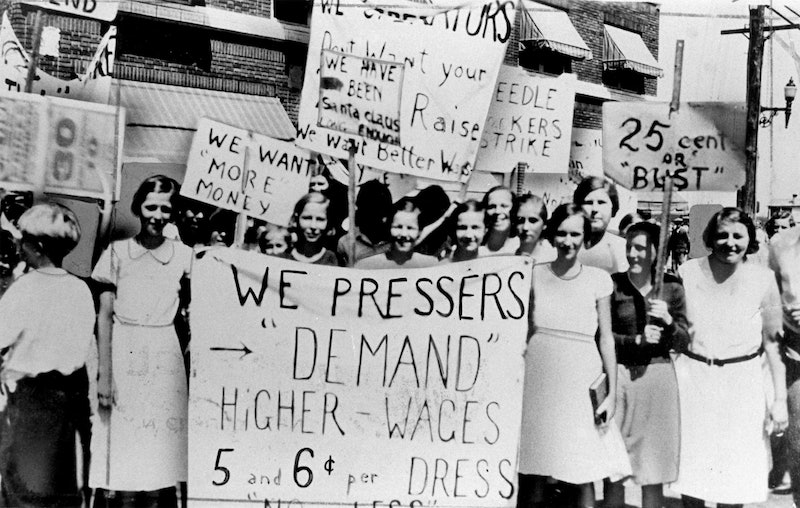 Women may still be paid far less than men, but new numbers show that there are more women in the job market than ever before. The Department of Labor’s October jobs report indicates that women have recovered all of the 2.7 million jobs lost during the recession, with men lagging behind.

This may feel like an awesome feminist victory, but don’t get ready to repeal Lilly Ledbetter just yet. This report still highlights some stark discrepancies in the job market that have existed since women got the right to vote, including the pervasive “13 cents on the dollar” salary gap between men and women, which is significantly higher among women of color.

The Wall Street Journal says a lack of labor mobility is likely contributing to the pervasive pay gap for women. “Women often occupy lower-paying segments of many industries they are in, and have difficulty breaking into male-dominated fields,” writes WSJ reporter Jonathan House.

These problems were problems for our tennis-shoe-and-power-suit wearing mothers in the 80s, and they’ll likely still exist for our hoverboard-riding offspring of the future. Women may be getting more jobs, but they’re not high-paying. As of January 2013, women still only occupy 4.2% of Fortune 500 CEO jobs, and still have trouble fitting in with the good ole’ boys club.

I also find it problematic that the media positions these gains as major advancements for women. The employment rate for women ticked up just a tenth of a percent. These achievements quickly become tokens, and stand-ins for actual improvements at companies who currently devalue the work of women.

There’s also little income growth for middle class and poor women, who are still reeling from the effects of the recession. Since 2008, thousands of women, especially women of color, have undergone radical transformations in their personal finances. A study by the Center for American Progress indicates that 53.3% of Black women bring home the bacon, significantly higher than the 4 in 10 female breadwinners of all ethnicities.

This upheaval may also contribute to this month’s job numbers, as more women were forced to look for better, higher paying work. It’s likely, though, that the increase is mostly due to high numbers of women in industries that have recovered quickly after the recession, like hospitality and healthcare.

Ultimately, this month’s job report is somewhat positive, but still pretty deceptive. But, there are still some bright spots for us working women to look forward to. We’re finally growing our numbers in the technology sector, and the government is finally contracting work to more women-owned small businesses.

Victories for women are always hard-fought and slow to come, and the job market is no exception. We’re not on par with the boys just yet, but these advancements should surely inspire a teensy bit of hope in your cynical feminist heart.

More like this
5 Crystals To Manifest More Money
By Megan McCarty
The Most Compatible Life Path Numbers, According To Numerologists
By Kristine Fellizar
How To Support Gun Control Reform Right Now
By Morgan Brinlee and Carolyn Steber
What Is Mandy Moore’s Net Worth?
By Hugh McIntyre
Get Even More From Bustle — Sign Up For The Newsletter