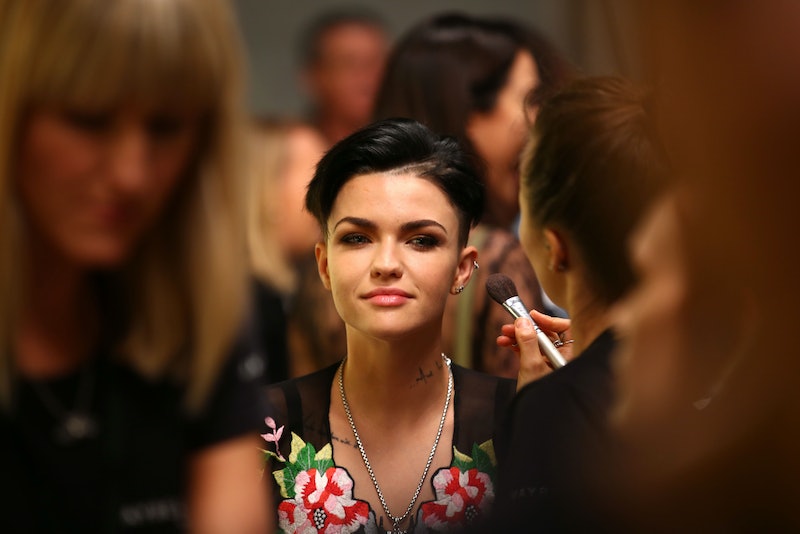 If you're anything like me (and what I imagine to be at least 67 percent of the American public), you binged-watched the third season of Orange Is The New Black and promptly fell in love with Stella Carlin, the androgynous Australian inmate with a Teenage Mutant Ninja Turtle tattoo. Stella is portrayed by the genderqueer Australian model and actress Ruby Rose who, it turns out, might be even more badass than her fictional counterpart.

Rose also openly identifies as gender fluid, and is taking this turn in the limelight to help teach the world what that means. Rose explained in an interview with ELLE.com , "For the most part, I definitely don't identify as any gender. I'm not a guy; I don't really feel like a woman, but obviously I was born one. So, I'm somewhere in the middle, which – in my perfect imagination – is like having the best of both sexes."

Rose's gender fluidity is abundantly apparent though her chameleon-like fashion and beauty choices, which seem to switch day-to-day and don't clearly subscribe to the gender binary. But maybe most importantly, you can see how much fun Rose has playing around with her look. If you're looking for some inspiration, or just want to see more of Rose, here are nine times Ruby Rose challenged gender norms in fashion and proved that the gender binary is bogus:

1. When she made this video about fluid gender identity.

Rose wrote, produced, and starred in this short film called "Break Free," which she posted back in 2014. This deeply personal video shows Rose transitioning from a hyper-feminine version of herself to one that's more traditionally masculine, and it's a moving introduction to the concept of gender fluidity.

2. When she told the world she doesn't need a wedding dress to be a bride.

Rose is engaged to fashion designer Phoebe Dahl, and the two are totally and completely in love if Instagram is any indication. Rose posted this picture to Instagram with the caption, "That one time we did a shoot and it become 100 percent real that I would never wear a dress at my wedding hahaha," which only makes me excited to see what she will wear. As Rose knows, a bride doesn't need to wear a traditional white gown, or any dress, to be a bride.

3. When she wore this "TOMBOY" beanie.

Rose has never really been one to hide her fluid gender identity, and it's pretty much summed up by the word emblazoned on her hat.

Short hair, long board, and flannel shirt? I told you Rose is a bad-ass.

"Twink" is a term really only used to describe gay men, and a very specific type of gay man. UrbanDictionary.com uses the adjectives, "attractive, boyish-looking, young." So, yes. This t-shirt is pretty gender-bending.

6. When she posted this pic in menswear-inspired women's underwear.

Rose had been looking for good, androgynous underwear, but, as she explains in the caption of this Instagram post, "You either gets men's underwear and end up with a whole section in the front you don't need... that isn't flattering, or you get the girls version which is pink and small and not as sexy..." And then she found this ethically-made menswear-inspired underwear from Sloane & Tate, and praised them for filling this niche and posted this picture and the rest is history.

7. When she showed how good she is at putting on eyeliner.

Rose's turn as the face of Maybelline New York is proof that having a gender fluid identity or dressing androgynously doesn't mean you have to forgo make-up, and it certainly isn't proof of inability to do make-up, as demonstrated by this video. Rose's eyeliner game is on point.

8. When she went to the barber instead of the salon.

Women traditionally go to the hair salon, and men usually go to the barbershop. But not Rose, who prefers barbers over hairdressers and apparently shares a barber with P. Diddy.

9. When she found a bosom buddy in Bieber.

Between her tattoos and her haircut, Rose sometimes gets mistaken for Justin Bieber. (It's even joked about in OITNB.) But rather than get her panties in a bunch about the comparison, she embraces it and makes fun of it, and that sense of humor and confidence is really why we were all charmed by Rose in the first place.

More like this
Sandra Bullock, Girlboss Extraordinaire
By Matt Harkins & Viviana Olen
Spice Girls’ Net Worth: The Richest Member Is Wealthier Than The Rest Combined
By Hugh McIntyre
Bustle Newsletter: May 6, 2022
By Stephanie Talmadge
10 Swoon-Worthy Beauty Looks From The 2022 Cannes Red Carpet
By Olivia Rose Ferreiro
Get Even More From Bustle — Sign Up For The Newsletter