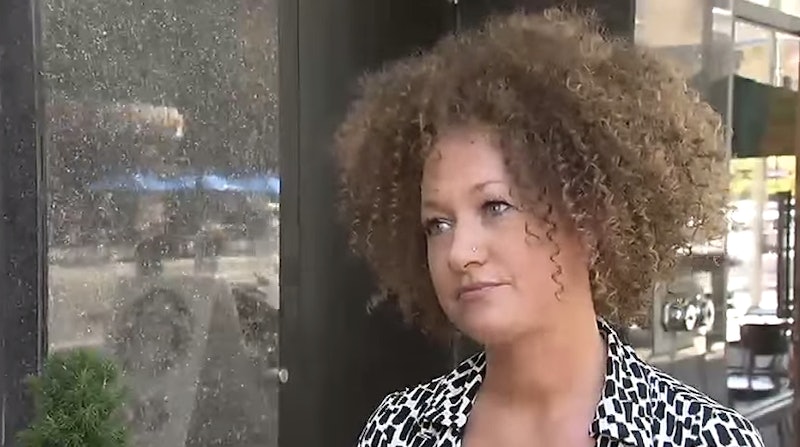 Now that former Spokane NAACP President Rachel Dolezal has publicly addressed the furor over her self-identifying as a black woman, questions have been raised regarding what it means to be transracial. Aside from the larger issue of whether it is truly possible to identify as one ethnicity while being born another, many are wondering if anyone else has come out as transracial before Dolezal. It turns out that another public official has been in the center of a very similar situation. Former Stockton, California, city councilmember Mark Stebbins, who was born to white parents but identifies as black, was fielding the same questions as Dolezal back when he ran for office in 1983.

Rather than being "outed" by family as Dolezal was, it was an incumbent city councilmember who first brought Stebbins' racial discrepancies to light. That incumbent, Ralph White, lost his seat to Stebbins in the 1983 Stockton election, only to reclaim it a year later after a successful recall election against the allegedly transracial candidate. The recall was the second against Stebbins waged by White. The first recall election, which concerned Stebbins lying about his racial heritage, ultimately failed. A second recall election insinuating political inadequacies brought Stebbins out of office.

When Stebbins was recently interviewed by ABC, he continued to reiterate his self-identifying status as African American. Stebbins says he was initially asked about his ethnicity during his city council campaign run, only to say that he identified as human, then added black when pressed for further clarification. Stebbins said:

I consider myself black, but also there is no such thing. But I want you to know that, there is, within that construct, there is a side that's against racism so I'm on that side... We have made in the United States that sort of racial construct that doesn't exist. It's like saying the world is flat. It's just a myth. Whatever race you consider yourself, you're not. That kind of construct, it doesn't work.

Stebbins is particularly sympathetic to Dolezal as not only someone who identifies as black but as a dedicated NAACP member himself. The Stockton resident has been a member of his local chapter for over 35 years and is considered a very dedicated and supportive force by Stockton NAACP President Bobby Bivens, who issued a brief statement to ABC. Stebbins said he sees Dolezal's stepping down from the organization as a political tactic brought on by her detractors and ultimately meant to halt the progress she's made in Spokane, according to an interview he gave with ABC.

Dolezal, however, felt that her resignation was for the good of the organization. In a lengthy interview with Melissa Harris-Perry on MSNBC, Dolezal had this to say about stepping down:

What is in the big picture interest? My resignation [yesterday], I really came to see that as conversation with my oldest son. He said, 'This is getting out of hand. You really need to say something.' ...As a local president, I have to defer to regional and to national, as I'm wearing that hat of the NAACP. I take that very seriously, by the protocol.

Stebbins and Dolezal also differ on how they view their self-identification. Whereas Stebbins appears to view race as a false construct, Dolezal gravitates strongly toward the black experience over her heritage. She told Harris-Perry that her self-identification came from "this feeling of central connection with black is beautiful, you know, just the black experience and wanting to celebrate that."

It's unclear what's next for Dolezal, as she is no longer teaching at Eastern Washington University nor is she Spokane NAACP President. Though only briefly serving as a Stockton city councilmember in 1983, Stebbins' name continues to show up on local ballots. He's run for positions on the Stockton-East Water Division board in 2010 and the San Joaquin County Board of Supervisors in 2012. In 2014, Stebbins yet again ran for a seat on the SEWD board. He lost to current SEWD Vice President Thomas McGurk, only pulling in a little over 25 percent of the vote.