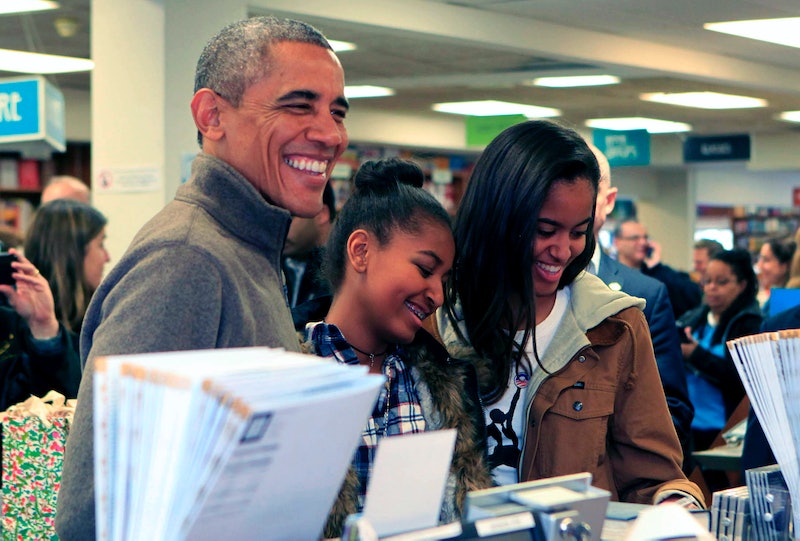 In a world where “feminism” is still considered by some to be a dirty word, it’s always uplifting to see feminist dads — especially when the feminist dads in question are influential male celebrities who make public statements that empower girls and women. And it's especially uplifting when famous fathers of daughters decide to sidestep the tired “overprotective dad” trope and advocate for their daughters’ independence and strength (as well as the independence and strength of women in general). They don’t see their little girls as fragile princesses in need of their shielding and monitoring — rather, they view them as impressive people who can and will change the world, and often as teachers who help them expand not just their hearts, but also their minds.

As these 11 quotes from famous fathers show, when you're raising a daughter, feminism becomes more than a political philosophy — it's also just a principle of good parenting. And these dads illustrate how fatherhood has affected them in all the right ways. People often think teaching daughters about feminism is a mother's job, but as these quotes show, it's everyone's job.

This Father's Day, let's celebrate feminist fathers who support and strengthen their daughters by listening to them, trusting their decisions, loving them unconditionally, and pushing them to be the best they can be. Let’s hope that their inspiring (and super sweet) words resonate with dads, dads-to-be, and everyone else around the world.

1. Will Smith On Letting His Daughter Make Her Own Decisions

"We let Willow cut her hair. When you have a little girl, it's like how can you teach her that you're in control of her body? … She has got to have command of her body. So when she goes out into the world, she's going out with a command that is hers. She is used to making those decisions herself. We try to keep giving [our kids] those decisions until they can hold the full weight of their lives."

2. Ben Affleck On Raising His Daughters To Be Feminists

"Well, [they're] a little young for a sort of Gloria Steinem doctoral thesis, but without getting into exactly what it means politically to be a feminist, our daughters understand what my wife understands full well, which is it's important to be strong, present, and powerful, and accept nothing less than a man would — in fact, ask for more. And, you know, that's part of what I admire so much about my wife, and I know that through her example, my children will absorb that."

"The great thing about the girls is they've got a wonderful role model in their mom. They've seen how Michelle and I interact — not only the love but also respect that I show to their mom. So I think they have pretty high expectations about how relationships should be, and that gives me some confidence about the future. I joke about this stuff sometimes, but the truth is they are smart, steady young women."

4. Matt Damon On The Importance Empowering His Daughters

“If I had a bucket list, I’d say raising my four girls to be strong, good women would be number one.”

5. Killer Mike Of Run the Jewels On Learning From His Daughter

“I've got a 14-year-old daughter who's like me reincarnated — it's the most frustrating thing in my g****** life right now. She's brilliant. I remember telling her on Halloween, ‘Why would you want to be Marilyn Monroe? Why would you want to be that white woman? Why don't you want to be Sojourner Truth or Harriet Tubman?’ And she says, ‘My brother's going as Freddy Krueger, and you're not telling him to be Martin Luther King or Malcom X. We're kids, daddy.’ So she essentially exposed my sexism.”

“I didn’t make those [memes], you know? It’s not by design. But I do have a little girl now and it’s important to me. These things are becoming… not more important to me, but more important in general, I think. There are lots of great women out there who I really admire: Tina Fey, Amy Poehler, the Broad City girls [Abbi Abrams and Ilana Wexler], Lena Dunham and Kathryn Bigelow. I don’t know, it just seems like it’s happening.”

7. Ben Affleck On What It Would Mean For His Daughters To Have A Female President

8. Forest Whitaker On Feeling Confident In His Daughter’s Choices

"If guys were to come around, I might take a serious tone. But I love her and trust her. Hopefully, I’ve taught her well enough to make the right decisions.”

9. Joss Whedon On Why It’s Important For Girls To See Strong Female Characters

"It's frustrating to me that I don't see anybody developing one of these [female superhero] movies. It actually pisses me off. My daughter watched The Avengers and was like, 'My favorite characters were the Black Widow and Maria Hill,' and I thought, Yeah, of course they were. I read a beautiful thing Junot Diaz wrote: 'If you want to make a human being into a monster, deny them, at the cultural level, any reflection of themselves.'"

10. Barack Obama On His Hopes For His Daughter's Future

“These are the things I want for you — to grow up in a world with no limits on your dreams and no achievements beyond your reach, and to grow into compassionate, committed women who will help build that world.”

"Everyone thinks I'm going to be a really protective father, but I'm not. She's a good girl, she's smart, and I respect her choices. If something isn't done right, she learns from it and that's life."

More like this
Beyoncé & Madonna’s “Break My Soul” Remix Honors A Group Of Black Icons
By Stephanie Topacio Long
22 Movies On Netflix That Are Perfect For The Whole Family
By Bustle Editors
Naomi Osaka & Emma Raducanu’s Experiences Have Inspired A New Amazon Show
By El Hunt
We’ve All Had Bad Sex. Nona Willis Aronowitz Is Talking About It.
By Sophia Benoit
Get Even More From Bustle — Sign Up For The Newsletter