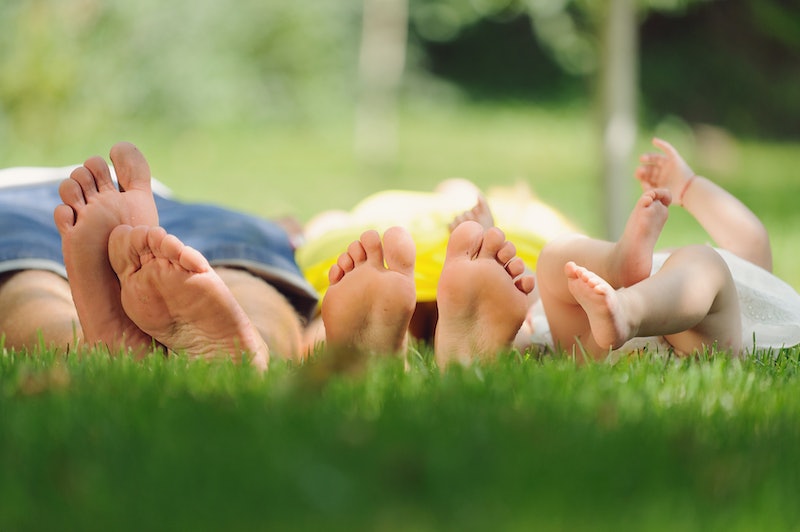 Looks like there's no getting around it: we are all becoming our mothers. At least when it comes to the way we raise our kids. According to a new study funded by the Wellcome Trust and published in the European Journal of Public Health, our moms impact the way we raise our own kids much more than our dads do. And that's not all; their parenting style in particular has a lot to do with the way we turn out, too. As for Dad's influence? Researchers were kind of "eh" on the subject, citing that at least in this sampling, he didn't seem to have a huge impact. Ouch.

Parenting plays a fundamental role in children's development, affecting health, social and educational outcomes in later life. So it's of utmost importance to society that we have a greater understanding of the complex issue of parenting behavior.

It was for these reasons and more that researchers gathered together 146 mothers and 146 fathers for the study, and filmed them while they each interacted with their two-year-olds. They also asked each parent a series of questions about the way their own moms and dads parented them. In the end, parents with affectionate mothers were found to show more affection and positive parenting behavior with their own kids, while parents who had moms they described as controlling tended to have more negative parenting behaviors. But when it came to each parent's father... well, experts really couldn't find any evidence to say they impacted their child's future parenting style either way.

Now some of this isn't exactly new stuff. There have been tons of studies on parental influence over the last few decades, and a lot of them credit Mom more than Dad with a slew of positive things. (Like the 2012 study that said a mother's love can positively impact a child's brain. Or the 2013 report that moms have the biggest impact on a girl's body image. The list goes on.)

Lead study author Dr. Vaishnavee Madden was quick to add a caveat to all of this, though, saying:

The results should be interpreted with caution due to the various limitations of the study, but they suggest that interventions to help parents be more engaged and responsive could have longer-term benefits that aren’t currently appreciated.

He's right; the study's small size and limited scope does present some problems. The most obvious hole? It only shows us the impact that parents have within the so-called "traditional" family, but says nothing about how this comes into play in "non-traditional" families (e.g. single-parent or same-sex households). And considering the fact that less than half of kids today live within a traditional family (46 percent, according to the Pew Research Center), it's safe to say there's clearly more research to be done here.

In other words, let's take this one with a grain of salt. After all, it's almost Father's Day — I'm not about to giving Dad a bad rap. Plus, if science (and life) has taught us anything, it's that Dad has totally passed on some rock-solid skills to us, too. And no, I'm not just talking about his genius shoe-tying techniques or killer parallel parking lessons. Allow me to count a few ways in which science has proven Dad's pretty much the best...

1. He teaches us to be fearless.

When it comes to taking chances, studies have suggested that we take our cues from Dad more than mom. "[F]athers play a particularly important role in the development of children's openness to the world," psychologist Daniel Paquette wrote in his study on fatherhood. "[T]hey also tend to encourage children to take risks, while at the same time ensuring the latter's safety and security, thus permitting children to learn to be braver in unfamiliar situations, as well as to stand up for themselves."

2. He boosts our self-confidence.

According to the 2006 report "Fathers And Their Impact On Child Well-Being," Dad's impact on our self-esteem is huge — and it starts early. "Even from birth, children who have an involved father are more likely to be emotionally secure, be confident to explore their surroundings, and, as they grow older, have better social connections," wrote study authors.

3. He shows us what it means to persevere.

"Fathers have a direct impact on how children perceive persistence and hope, and how they implement that into their lives," said Randall Day, professor in the School of Family Life and co-author of a 2012 Brigham Young University study. "It's important to say that moms can do this, too, but it turns out that when fathers use authoritative parenting, they have an impact on how their adolescents perceive themselves and how persistent they are in their lives."

A Michigan State University study found that that kids who spend more time with their dads tend to have better social skills, mental health, and even a better sense of humor. (How exactly you scientifically judge that last one, I'm not so sure; but hey, it sounds about right.) A separate study also tied dad's involvement to our own happiness, citing that kids with involved dads were far less prone to depression.

5. He just straight up rocks.

I don't really have a study here to back this one up, I just felt it needed to be said.

But anyway, there you have it — take that, science.

More like this
Why You're Seeing Green Bandanas At Abortion Rights Protests
By Lexi Inks
Aesop's Queer Library Is Open
By Tomi Otekunrin
How To Come Out Online, According To Trevi Moran
By Melanie Mignucci
Jujubee’s Humble Reminder
By Sam Ramsden
Get Even More From Bustle — Sign Up For The Newsletter