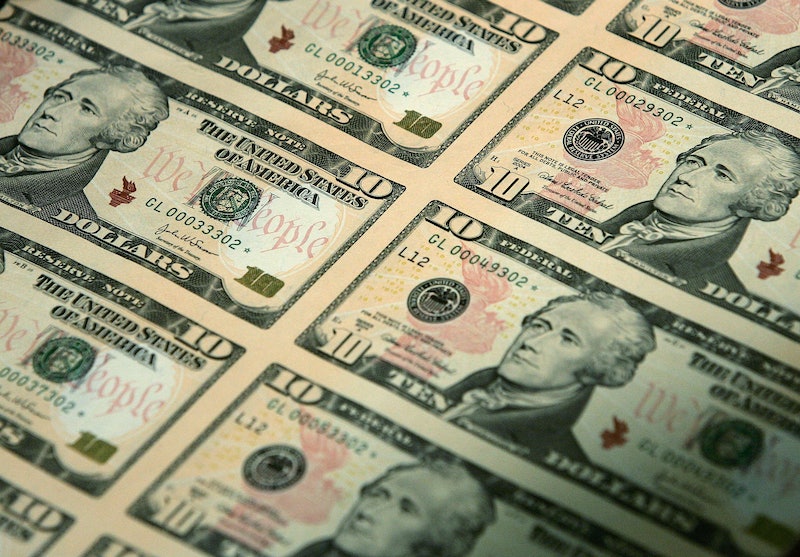 For the first time in a century, a woman will appear on the $10 bill in celebration of the 100th anniversary of the 19th Amendment in 2020. The woman, who has not yet been determined, will replace Treasury Department founder Alexander Hamilton. According to the Treasury Department, they haven’t decided who will take Hamilton’s place, and are instead asking for suggestions throughout the summer.

The undecided woman will not be the first female to become the face of currency-- in the 19th century, Martha Washington received that distinction. Although there is no specific list of contenders for the new bill, popular suggestions include first lady Eleanor Roosevelt, Harriet Tubman, Wilma Mankiller, and Rosa Parks. The decision will be announced by Treasury Secretary Jack Lew later this year.

“It’s very important to be sending the signal of how important it is to recognize the role that women have played in our national life and in our national history for a very long time, really from the beginning,” Lew told The Wall Street Journal on Wednesday. “This is a symbolic representation of that but symbols are important.”

The idea of a woman on currency isn’t a new one. This year, a group called Women on 20s started a campaign to urge President Obama to replace former president Andrew Jackson with a female in his place on the $20 bill.

To gather support for the campaign, the group sent out a petition, stating: “Women On 20s calls upon President Barack Obama to order the Secretary of the Treasury to change the current portrait portrayed on our American $20 bank note to reflect the remarkable accomplishments of an exemplary American woman who has helped shape our Nation's great history.”

The group also conducted a survey where they asked supporters to nominate and vote for who they would like to see take over the bill. The competition ended on May 1o and the votes were overwhelmingly in favor of abolitionist Harriet Tubman, who received 118, 328 votes, while Eleanor Roosevelt came second with 111, 227 votes.

Though Women On 20s isn’t getting exactly what they want, according to the Treasury Department, the $10 bill is a good start, and was selected because it is commonly used in commerce. The $10 bill redesign will be the start of a broader redesign, which will include improved features for those with visual impairments.

‎”While it might not be the twenty dollar bill, make no mistake, this is a historic announcement and a big step forward,” Senator Jeanne Shaheen (who previously announced her support of the Women on 20s campaign) told The Wall Street Journal. “Young girls across this country will soon be able to see an inspiring woman on the ten dollar bill who helped shape our country into what is today and know that they too can grow up and do something great for their country.”

More like this
Here’s Where The NHS Nurses’ Strike Currently Stands
By Sophie McEvoy
Watch Jacinda Arden’s Devastatingly Honest Resignation Speech
By Sam Ramsden
24 History-Making Black Women You Probably Didn't Learn About In School
By Ayana Lage and JR Thorpe
25 Inspiring Quotes From Black Women To Celebrate Black History Month
By Kyli Rodriguez-Cayro and JR Thorpe
Get Even More From Bustle — Sign Up For The Newsletter
From hair trends to relationship advice, our daily newsletter has everything you need to sound like a person who’s on TikTok, even if you aren’t.