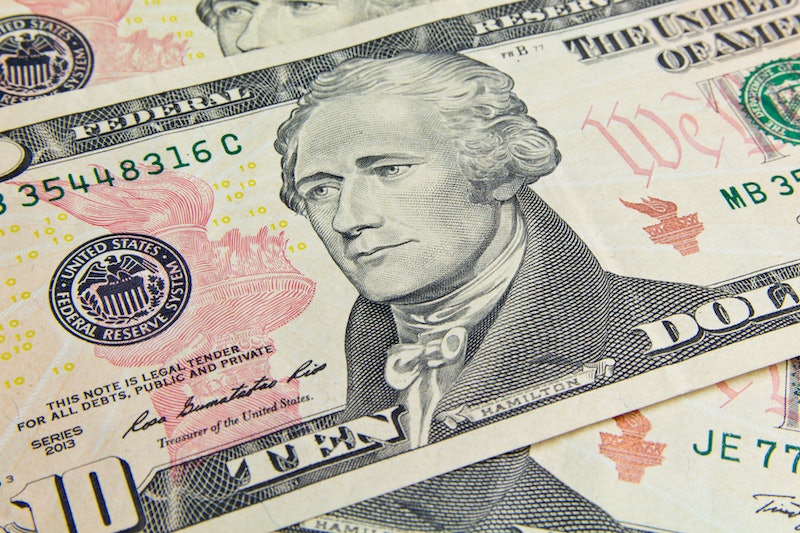 Hallelujah! In the most stunningly amazing news, a woman will be on the $10 bill starting in 2020. She'll share the valuable space with Alexander Hamilton, the first secretary of the Treasury, whose face is already on the bill. The news is huge considering there's been a giant push to get a female face on a U.S. bill, an important initiative because having a woman on the $10 bill matters.

The United States has had women on its currency before but never on something as mainstream as bills. Feminist and woman's suffrage pioneer Susan B. Anthony was on the silver dollar coin from 1979 to 1981 and again in 1999. Lewis and Clark's Shoshone guide Sacagawea was minted on gold-colored dollar coins starting in 2000. But let's be real. If you're using cash, you're relying mostly bills instead of loose change. That's why choosing the $10 bill — not the unicorn $2 bill or less utilized $50 bill, mind you — is groundbreaking. You're putting a woman's face visibly in your wallet, along with the rest of our country's early leaders.

In a statement released Wednesday, U.S. Treasury Secretary Jacob J. Lew said this will be the first time a woman's portrait will be on a bill in more than a century.

America’s currency is a way for our nation to make a statement about who we are and what we stand for.

So who are we? We're a nation where more than half of its population are women, though only 20 percent of Congress are female. We're a nation that could very well have its first female president next year and finally catch up with the rest of the world in terms of putting women in power. We're a nation whose gender wage gap has women earning 78 cents to every dollar a man earns, which makes you rethink our country's mantra of freedom and equality for all. We're also a nation with the embarrassing title of the only industrialized country in the world to not mandate paid maternity leave.

A woman on the $10 bill matters because it's a sign that, yes, who we are and what we stand for have changed in the last century. That being a U.S. lawmaker or the face of our money isn't limited to being a white male. Maybe that change will finally reshape how women are represented and treated in this great nation we call the U.S. of A. That's a future I'll happily pay for.