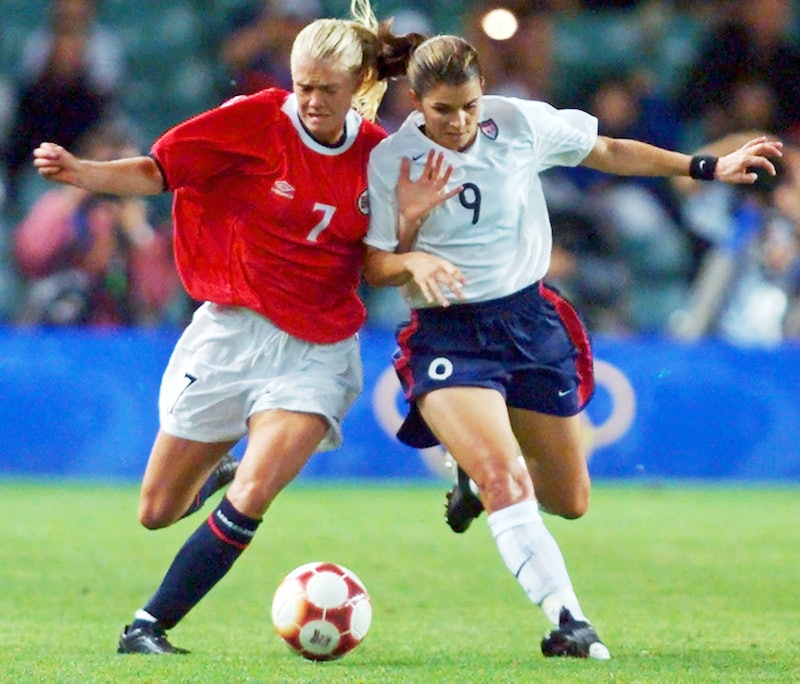 Soccer might not seem like such a big deal in the United States, so many of you non-soccer fans might have been a little confused about all the soccer news that's probably been drowning your feed lately. Wasn't the World Cup last year? Why isn't Shakira singing a theme song? Who are all these badass sportswomen? Yep, right now two pretty awesome soccer events are going on: the Women's World Cup and the Copa America. The Copa America is awesome for all your Latin American eye candy needs, but the women in the World Cup are offering some major inspiration. In light of the Women's World Cup, I gathered some inspirational quotes from Mia Hamm, one of the top soccer players of all time.

Hamm has gained an impressive amount of accolades for her athleticism and skill, and remains a great inspiration for many women who have dared to step on to the field. In 2004, she and her USA National teammate Michelle Akers were the only women and only Americans to be on the list of FIFA "125 Greatest Living Soccer Players," chosen by legendary Brazilian player, Pelé.

Check out some of Hamm's quotes below that prove she's an inspiration both on and off the soccer pitch.

2. “Somewhere behind the athlete you've become and the hours of practice and the coaches who have pushed you is a little girl who fell in love with the game and never looked back... play for her.” — Go For The Goal

3. "Things that I have learned through this game that I would share with you: that girls should have every opportunity to compete and develop as boys; that there is no substitute for hard work." — National Soccer Hall Of Fame Induction Address

4. “A winner is that person who gets up one more time than she is knocked down.” — Go For The Goal

5. “I learned a long time ago that there is something worse than missing the goal, and that's not pulling the trigger.” — Go For The Goal

6. “I am a member of the team, and I rely on the team, I defer to it and sacrifice for it, because the team, not the individual, is the ultimate champion.” — Go For The Goal

7. "Take your victories, whatever they may be, cherish them, use them, but don't settle for them." — Go For The Goal

8. “There are always new, grander challenges to confront, and a true winner will embrace each one.” — Go For The Goal

Now get out there and kick some butt!