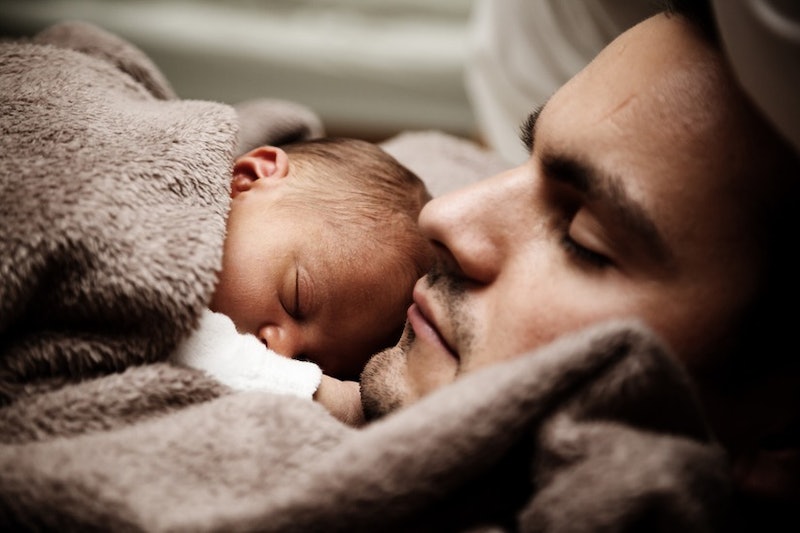 With guys like Stephen Curry and Chris Pratt making the rounds recently for not only their work, but the total devotion they have to their families, now, more then ever, is a great time to celebrate what it means to be a father. Oh, and it's Father's Day, too. According to the National Fatherhood Initiative, a highly involved father has a great positive impact on a child’s life, and research shows that more father-child contact within the first 10 years lead to kids with fewer behavioral problems and high marks on reading achievement tests.

Being a mother is tough. There’s no question about it. But make no mistake, being a father isn’t an easy breezy walk in the park, either. According to Ask Men, being a good father entails being an open-minded disciplinarian who leads by example, allows his kids to make mistakes, challenges them, spends time with them, protects them, and shows them unconditional love.

A lot of research has been done surrounding mothers and their experiences from pregnancy to raising their children. It does makes sense, after all, mothers do have to deal with the whole growing-a-tiny-human-inside-of-themselves thing for nine months. But every now and then, a study will come out to give us better insight into fatherhood and its importance.

Here are 15 things to know about being a father, according to science:

A study done at the University of North Carolina found that in terms of genetic makeup, mammals are more like their fathers than their mothers. Even though we get the same amount of genetic mutations from our parents, we actually use more of the DNA we get from our dads. Knowing this information can help in the study of diseases. For example, the severity of a disease can be different if passed down from the mother or the father.

2. What To Expect When You're Expecting: Hormone Changes! For Both Moms And Dads

Obviously women go through a lot of hormone changes when they're expecting, but in a study of 29 first-time parents done by researchers at the University of Michigan found that expectant fathers showed drops in testosterone and estradiol, which is a form of estrogen. The hormone changes occur in the early stages of pregnancy. Researchers believe the changes occur due to a process happening within a man by just thinking of becoming a father. The study further found that men with larger declines in testosterone reported to being more engaged with their babies and even more supportive of their spouses.

3. Dads Need To Seriously Work On Their Baby Talk

Mothers are known for having soothing voices that can immediately put their child at ease. Scientists have even declared that mothers have mastered the art of "motherese," or that tweak in pitch and pace that a mother uses when she talks to her young child. Fathers, on the other hand, have a lot of work to do do in that area. A recent study done by researchers at Washington State University looked at 11 preschoolers around 30-months-old and recorded over 150 hours of audio to find their results. The study found that dads' voices tend to stay steady when they're talking to their children, and they pretty much talk to their kids like they talk to adults. But as speech scientist and the study's coauthor Mark VanDam pointed out, that's not necessarily a bad thing. In fact, in doing so, dads are actually giving their young kids a sort of "conversational bridge" to the outside world.

4. Dads, Too, Feel Guilty When They Leave Their Kids

If you think new moms are the only ones who feel guilty leaving their kids for even a short time, you'd be wrong. In a 2014 study of working mothers and fathers in focus groups by researchers at Kansas State University, it was found that men have to deal with their feelings when it comes to balancing family and fitness.

Emily Mailey, an assistant professor of kinesiology in the College of Human Ecology and researcher said,

A decline or lack of exercise among working parents has mostly been recognized as a female issue. The ethic of care theory — that females have been socialized to meet everyone else's needs before their own — explains why women feel guilty when they take time to exercise, though the same principle hasn't been studied for fathers. ...The guilt parents feel is because they think of exercise as a selfish behavior. Fathers reported guilt related to family and taking time for themselves, whereas mothers reported guilt related to family, taking time for themselves and work.

According to Mailey's research, fathers reported to taking time during lunch for exercise or working out during the day in order to spend more time with their family and kids after work.

5. Dads Need To Work On Their Fair Share Of Housework

In sticking to stereotypes, an Ohio State study found that pre-baby, working men and women shared the housework equally, but once the first child pops out, fathers tend to take a step back on chore duties. According to the study of 182 working couples who became first-time parents, the women spent an hour more at home each day than their husbands did. During the first weeks of parenthood, men actually cut back on their household duties by five hours per week. Speaking of chores...

6. Dads Who Do More Chores Have Daughters With High Aspirations

In a 2014 study published in Psychological Science, it was found that parents' domestic actions spoke louder than words. As in, even though a father preached all things feminism, if he left all the household duties to his wide, as "traditional" families tend to do, daughters will remember that and tend to envision themselves in traditionally female-dominant jobs. Researchers looked at 326 children aged 7 to 13-years-old and at least one of their involved parents. It was found that fathers who were found to help with household chores had daughters who aspired for less traditional and higher paying careers. So do as John Mayer says: Fathers, be good to your daughters, and wash a dish or two.

7. The Struggle Is Real For New Dads, Too

A study done by a UK charity for parents, NCT, found that a third of dads struggle with the mental pressures of being a new father, leading researchers to recognize that postnatal depression and perinatal mental health issues can happen to not only women but men as well. It was even found that men who support women with postpartum depression are likely to experience it themselves.

8. "Deadbeat Dads" May Not Be What They Seem

Sometimes, things between a mother and a father don't work out. Sometimes, both parents share the responsibilities of raising the kids even though they're separated. Sometimes, it's just solely the mother or the father. But nobody thinks it's cool for a guy to abandon all responsibilities of being a father. In fact, as TIME reports, in 2011, only 61 percent of child support payments were made by men to mothers of their children. But a recent study published in the Journal of Marriage and Family took a look at 367 lower income fathers and found that fathers who don't pay for child support in cash contribute to their children's lives in a different way. Instead, almost half of the fathers in the study provided their children with baby products, clothes, school expenses, and food. Researchers found that those fathers contribute around $60 a month per child, which doesn't show up on statistics. They believe that dads prefer to give their kids stuff, rather than hand cash over to the moms, because the fathers get more recognition from their children.

Researchers from the Freie Universitat in Berlin found that male nightingales prove their family values through song. It was found that the better the singing, the more supportive and protective the male would be towards their family.

10. For Some Men, Starting A Family Can Increase A Man's Salary, Productivity Level, And Loyalty To His Company

A 2008 study conducted at the University of New Hampshire found that for married white and Latino men, the birth of a child brought an increase in annual earnings and time spent at work. It was even found that they earned more if their wives opted for the more traditional route and worked less. However, for married black men, the birth of a child was associated with a smaller increase in hourly wages and annual earnings.

11. The Best State For Working Dads Is Minnesota. The Worst? Mississippi.

A survey conducted by WalletHub analyzed 20 key areas including work-life balance, health conditions, financial well-being, male life expectancy, and child raising environments, among others to rank the best and worst states for working dads. The top five states for working dads are New Jersey, Vermont, Massachusetts, New Hampshire, and Minnesota at the top. At the bottom of the list are Louisiana, West Virginia, Arkansas, Nevada, and Mississippi.

12. You Can Thank All That Time Spent With Dad For Your Lack Of STDs In College

Research done at the University of Florida found that female students who said their dads were more involved in their lives as teens were more likely to practice safe sex in college. The researchers surveyed 748 college students in an introductory course at a large public southeastern university, where 60 percent of the population was female. Those who reported that their fathers were actively present in their lives used condoms more frequently, had sex less frequently, and with fewer partners. Researchers believe that it has something to do with male attention. If a father figure is present in a girl's adolescent life, she doesn't need to actively seek male attention outside of the home.

In a study published in the Canadian Journal of Behavioural Science, fathers positively influence the development of their children though hands-on parenting. Having a father present in a child's life was found to have a positive influence on a child's problem-solving abilities and a decrease in emotional problems such as sadness, social withdrawal, and anxiety. Furthermore, an absentee dad was actually found to be worse for girls. It was found that middle school girls with absent fathers experienced higher levels of emotional problems at school than other girls whose fathers were present in their lives.

14. Dads Who Play With Their Children Help Them Develop Better

In research done by Kathryn Kerns, a professor of psychological sciences at Kent State University in Ohio, she found that a child's ability to form close, trusting bonds with their parents early on in life could predict the quality of a child's social future when it came to friends and romance. It was found that fathers who play with their children in a goofy and teasing way helped strengthen their bond with their child, which in turn, helped the child develop. It was also found that little gestures here and there, such as a father leaning down to nuzzle his baby's neck with his chin, were found to be signs of encouragement for a frustrated child.

15. Dads Who Spend More Time With Their Kids Are Happier Overall

In a study published earlier this year in the Academy of Management Perspectives, researchers took responses from 31 fathers with young children to answer a series of questions about their thoughts on career and fatherhood. It was found that working dads who spent more time with their kids were more satisfied with their jobs and experienced less conflicts in their home, finding that perfect work-life balance.

Since Father’s Day is just around the corner, it’s nice to take the time out to appreciate all the great dads out there — mine included! — and thank them for everything they do.