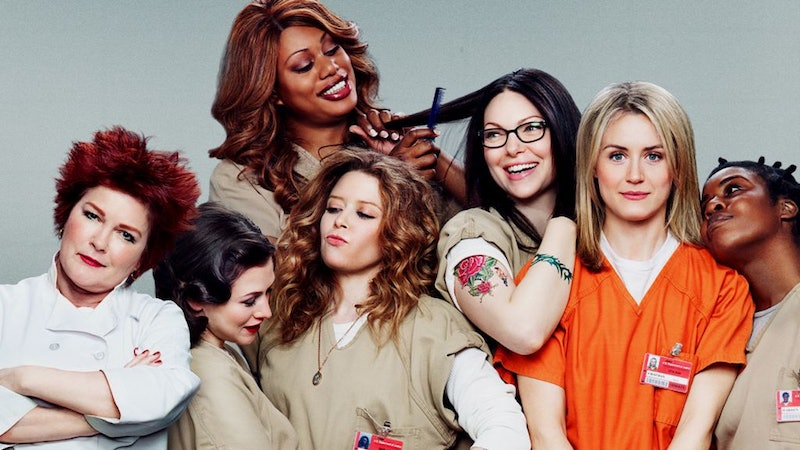 Thanks to its early release (BLESS YOU, NETFLIX), I got a jump on curling up on my couch, binging on Orange is the New Black... but possibly like you, now I'm done. Finito. And after some intoxicating highs and some infuriating lows, I haven't yet had my fill of the women of Litchfield Correctional. I have a feeling that I'm not the only one.

Of course, once you've been through a new season twice in the span of days — um, not that that's me or anything... — the words "addiction" and "unhealthy" come to mind. So, before my cat rats me out and the culture police come running, I've decided to go elsewhere for my OITNB fix.

Whether you — like me, I admit — have already found yourself in the uncomfortable position of admitting you might have a Piper Chapman problem, or if you're one of the lucky ones and haven't finished Season 3 yet but you're still worried about what comes next, these nine books should be just what you need to make it through the long dark night after the screen fades to black and the final credits roll:

With all the romance, mystery, and feline mischief lingering in the air, it can be easy to forget that one of the fundamental conceits structuring Truman Capote's Breakfast at Tiffany's concerns Miss Holly Golightly's visits to Sing Sing at the behest of the devious racketeer Sally Tomato. Although none of the inmates at Litchfield seem to receive visitors in the high style Holly maintains, the ins and outs of visiting hours as reported by Capote will bring you right back to your favorite moments of Orange Is the New Black.

As a naive young ingenue flees the sheltered life of her family home for the bohemian houseboat her sister shares with a beautiful young blond, trouble follows close behind. Tackling provocative female relationships and the strong sexual allure of women alone together decades before Netflix was even the ghost of an idea, Mary Renault's startling, sensuous, sinewy novel highlights the intricacies of female friendships and the dark side of desire from an angle that may have you seeing coed dorms and a leafy green yard at the periphery of your mind's eye.

While the most memorable OITNB flight to freedom came at the end of Season 2, Season 3 is ripe with ramifications and emotional fallout, making Henri Charrière's Papillon the perfect follow-up text. After receiving a life sentence for a murder he did not commit, Charrière documents his stint on Devil's Island and the daring, shocking, near-miraculous escape that will have you flashing back to life on the inside and everything the women of Orange Is the New Black do to fend off the furious pain of imprisonment.

Zami: A New Spelling Of My Name by Audre Lorde

Audre Lorde's miraculous prose focuses it's unique power on the woman who have shaped her brilliant career and her strong, independent sense of self. After spending so much time in the empowered female community of the Litchfield Correctional Facility, ease back into mixed company with this incredible story of female role models, and take some time to remember the glorious friendships and complex bond that draw the characters of OITNB together.

Struggling with the nature of a queer identity and the boundaries of gender normativity, Eileen Myles' poetic novel Inferno harkens back to the uncomfortable journey taken by so many of the inmates serving time behind bars on Orange Is the New Black. If you live for the flashbacks and every sneak peek at the backstories that shed new light on the lives of Boo, Lorena, Piper, and Poussey, Inferno is the perfect way for you to wind down from Orange Is the New Black.

The Sound of Things Falling by Juan Gabriel Vásquez

Even when they're not bought, bartered, and sold behind bars, drugs take center stage in the Piper Chapman story, and there's no book that calls attention to the allure, the extent, and the effects of the globe drug trade better than Juan Gabriel Vásquez's The Sound of Things Falling. So brew up a mug of strong tea and settle in for a wild ride as you explore the history of narco-trafficking in Columbia with one of the world's literary all-stars.

It begins with a breakout from Australia's Pentridge Prison and slowly picks up steam in the Bombay slums with mobsters, jihadists, and community health clinics — Gregory David Roberts Shantaram is not only based on a true story, but also one of the most exquisite portrayals of life after the escape that I have ever come across. So, if you like imagining what might become of your favorite inmate if she were to tunnel out of Litchfield, Shantaram is the book for you.

De Profundis is more than just one of the most famous prison texts of all time — Oscar Wilde's epistolary retelling of the lessons he learned during his time among the incarcerated will break your heart and bring you right back to those long nights you spent in the dorms with women struggling to make sense of it all. Shimmering with the challenges of catharsis and full to the brim with personal details, spending time with De Profundis will take your Orange Is the New Black addiction to a whole new level.

In one of the more unusual stories of incarceration ever to hit the presses, The Enormous Room details e.e. cummings' time within a French prison at the height of World War I. If you enjoy the dark comedy of Orange Is the New Black, this energetic exposé of life as a wrongfully accused inmate at La Ferté-Macé should leave you with tears rolling down your cheeks in all the right ways; who knows, by the end you may even find yourself looking back fondly on Season 3 of the OITNB, safe and secure in the knowledge that literature will carry you through until Season 4 makes its debut.

More like this
16 Novels That Paint A Realistic Portrait Of Abortion
By K.W. Colyard
'The Summer I Turned Pretty' Book Ending Is An Emotional Rollercoaster
By K.W. Colyard
At 14, Jenny Han Wrote Rom-Coms About Her Friends & Fan Mail To Leo DiCaprio
By Alyssa Lapid
Aesop's Queer Library Is Open
By Tomi Otekunrin
Get Even More From Bustle — Sign Up For The Newsletter