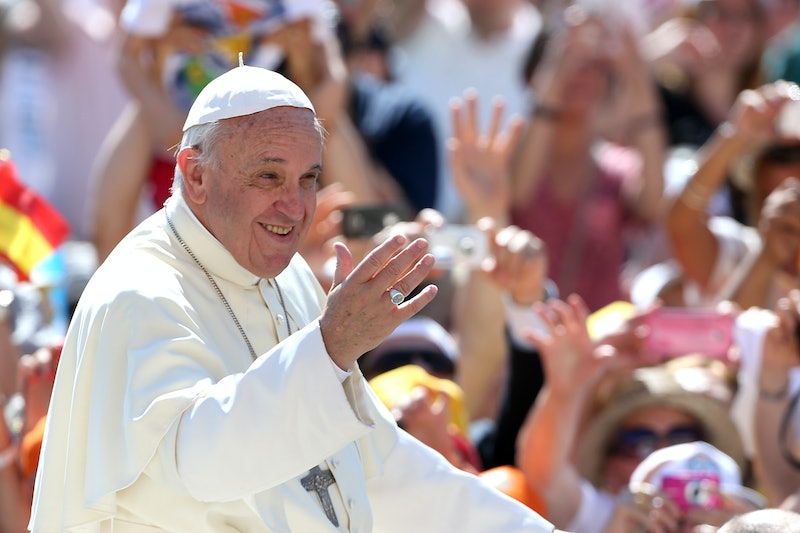 The Vatican on Thursday released a highly anticipated 184-page papal encyclical on climate change, in which Pope Francis discusses to the "global problem" of confronting environmental degradation and calls global warming an "urgent challenge to protect our common home." Christopher Vogt, chairman of the Department of Theology and Religious Studies at St. John's University in New York, told Mother Jones that this encyclical — Francis' first since becoming pope — is "the most authoritative type of statement issued by a pope short of something declared to be infallible." As a result, even though the encyclical isn't infallible, it is considered the highest form of teaching a pope can give.

Titled "Laudato Si'," meaning "Be Praised," a draft of this encyclical — which criticizes consumerism, irresponsible development, human activity, and the use of fossil fuels — was leaked on Monday by an Italian magazine, after which Jeb Bush and Rick Santorum both spoke out against the pontiff's involvement in the issue. "I hope I'm not going to get castigated for saying this by my priest back home, but I don't get economic policy from my bishops or my cardinals or my pope," said Bush, who is a GOP presidential hopeful, at a campaign event.

But the document is officially available to the public now, and below are 11 of the most important points that Francis makes as he urges Catholics around the world to make the fight against climate change a priority.

1. Climate Change Is A Global Problem With Drastic Consequences

Climate change is a global problem with grave implications: environmental, social, economic, political and for the distribution of goods. It represents one of the principal challenges facing humanity in our day ... If present trends continue, this century may well witness extraordinary climate change and an unprecedented destruction of ecosystems, with serious consequences for all of us.

2. The Climate Is A Common Good, & Humans Need To Change How They Live To Protect The Environment

The climate is a common good, belonging to all and meant for all. At the global level, it is a complex system linked to many of the essential conditions for human life. A very solid scientific consensus indicates that we are presently witnessing a disturbing warming of the climatic system ... Humanity is called to recognize the need for changes of lifestyle, production and consumption, in order to combat this warming or at least the human causes which produce or aggravate it.

[Climate change's] worst impact will probably be felt by developing countries in coming decades. Many of the poor live in areas particularly affected by phenomena related to warming ... For example, changes in climate, to which animals and plants cannot adapt, lead them to migrate; this in turn affects the livelihood of the poor, who are then forced to leave their homes, with great uncertainty for their future and that of their children.

4. We Must Seek An Intersectional Approach To Combat Climate Change

When we speak of the “environment," what we really mean is a relationship existing between nature and the society which lives in it. Nature cannot be regarded as something separate from ourselves or as a mere setting in which we live ... We are faced not with two separate crises, one environmental and the other social, but rather with one complex crisis which is both social and environmental. Strategies for a solution demand an integrated approach to combating poverty, restoring dignity to the excluded, and at the same time protecting nature.

5. The Earth's Supply Of Resources Is Not Infinite

Human beings and material objects no longer extend a friendly hand to one another; the relationship has become confrontational. This has made it easy to accept the idea of infinite or unlimited growth, which proves so attractive to economists, financiers and experts in technology. It is based on the lie that there is an infinite supply of the earth’s goods, and this leads to the planet being squeezed dry beyond every limit.

This sister, [Mother Earth], now cries out to us because of the harm we have inflicted on her by our irresponsible use and abuse of the goods with which God has endowed her. We have come to see ourselves as her lords and masters, entitled to plunder her at will. The violence present in our hearts, wounded by sin, is also reflected in the symptoms of sickness evident in the soil, in the water, in the air and in all forms of life. This is why the earth herself, burdened and laid waste, is among the most abandoned and maltreated of our poor.

7. International Responses Have Not Been Sufficient

It is remarkable how weak international political responses have been. The failure of global summits on the environment make it plain that our politics are subject to technology and finance. There are too many special interests, and economic interests easily end up trumping the common good and manipulating information so that their own plans will not be affected ... Consequently the most one can expect is superficial rhetoric, sporadic acts of philanthropy and perfunctory expressions of concern for the environment, whereas any genuine attempt by groups within society to introduce change is viewed as a nuisance based on romantic illusions or an obstacle to be circumvented.

A change in lifestyle could bring healthy pressure to bear on those who wield political, economic and social power. This is what consumer movements accomplish by boycotting certain products. They prove successful in changing the way businesses operate, forcing them to consider their environmental footprint and their patterns of production. When social pressure affects their earnings, businesses clearly have to find ways to produce differently. This shows us the great need for a sense of social responsibility on the part of consumers.

9. In Eliminating Coal, We Should Consider Both Short-Term & Long-Term Solutions

We know that technology based on the use of highly polluting fossil fuels – especially coal, but also oil and, to a lesser degree, gas – needs to be progressively replaced without delay. Until greater progress is made in developing widely accessible sources of renewable energy, it is legitimate to choose the lesser of two evils or to find short-term solutions. But the international community has still not reached adequate agreements about the responsibility for paying the costs of this energy transition.

10. The Fight Against Climate Change Should Foster Unity

We must regain the conviction that we need one another, that we have a shared responsibility for others and the world, and that being good and decent are worth it. We have had enough of immorality and the mockery of ethics, goodness, faith and honesty. It is time to acknowledge that light-hearted superficiality has done us no good. When the foundations of social life are corroded, what ensues are battles over conflicting interests, new forms of violence and brutality, and obstacles to the growth of a genuine culture of care for the environment.

Human beings, while capable of the worst, are also capable of rising above themselves, choosing again what is good, and making a new start, despite their mental and social conditioning. We are able to take an honest look at ourselves, to acknowledge our deep dissatisfaction, and to embark on new paths to authentic freedom. No system can completely suppress our openness to what is good, true and beautiful, or our God-given ability to respond to his grace at work deep in our hearts. I appeal to everyone throughout the world not to forget this dignity which is ours. No one has the right to take it from us.