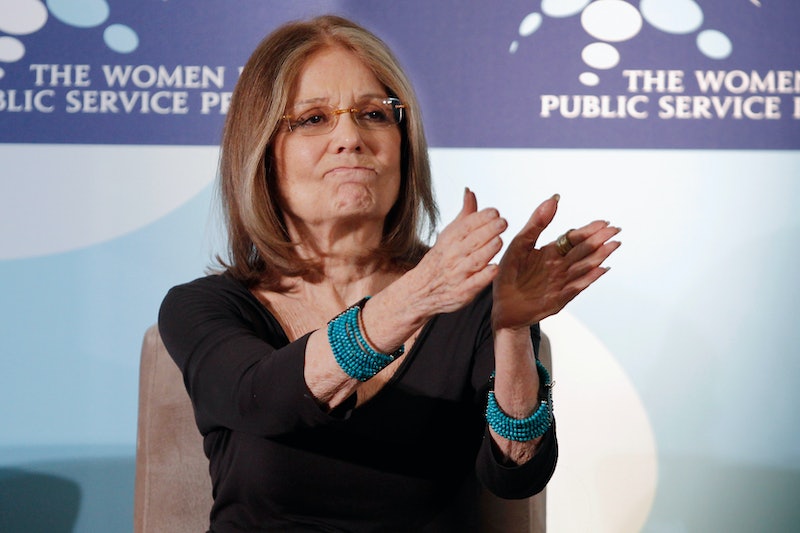 "Money, money, money— must be funny. It's a rich man's world." Thanks, ABBA, for a reminder that is still all-too relevant in 2015. All of the dollar bills in our wallets still display the faces of a bunch of dead white dudes, and well, we're way past due on seeing a woman's face unfold from our crumpled notes. As if an answer to our prayers to the feminist goddesses, the Treasury confirmed Wednesday that the $10 bill will feature a prominent American woman. Since the news broke, there have been plenty of suggestions as to whose face could replace ol' Alexander Hamilton's —from Sojourner Truth to Margaret Sanger —and they're all valid choices. But what if we had the chance to choose from one of today's living female activists to feature on the bills?

There are many to choose from — women who have followed in their foremothers' footsteps to fight for reproductive rights, for ending sexual assault on campus, and basically for the whole gamut of human rights. We've got so many women of history to be thankful for, and there are still so many whose daily work makes a difference in achieving equality in this country. Let's take a moment to thank these living legends now, though they are only a few in a long list; the names of modern women who deserve to be on the $10 bill are endless, but here are a few to start.

Notorious RGB. The end. But really, the 82-year-old Supreme Court Justice has been recently voted as the most popular Supreme Court Justice, according to Talking Points Memo. And last summer, when the Supreme Court passed legislation based on Hobby Lobby's restricting employees access to birth control, Ginsburg penned a scathing and brilliant dissent, which an amazing man and ally turned into a catchy little tune (with a little added riffing). RGB continues to make us proud, including that time she fell asleep during the State of the Union because, well, wine. All jokes aside, Ginsburg, who is to be portrayed by Natalie Portman in an upcoming film, was a successful attorney before being appointed to the Supreme Court by President Clinton in 1993. She's forever earned a place in our hearts, but she should probably wait until a spot on the $100 opens up; RGB doesn't play in the minor leagues.

The president of Planned Parenthood isn't the first in her family to become a show-stopping activist. Her mother, the late Ann Richards, former governor of Texas, was a champion for the rights of women and minorities. Planned Parenthood named Cecile Richards head of their organization in 2006, the year Ann died. Richards has made a name for herself in American activism and politics, and is a strong advocate of politicians like Wendy Davis, who worked to stave off restrictive abortion legislation in her state. Richards, we want you on our team and on our money.

The writer and activist has made many history books herself. A member of the Black Panthers, Davis was and is an advocate for gender equity and prison reform. She's also one half of the iconic fist-in-air photo with Gloria Steinem. She's marched, been behind bars, and taken what she knows back to the classroom as a Professor Emerita of women's studies at University of California — Santa Cruz. To have her at the front of the classroom and on our $10 bills is a beautiful dream.

All hail Senator Gillibrand. The New York senator has spoken up for many issues on the U.S. Senate floor, including the rights of veterans and families, but perhaps most notably, she has become one of the faces of the fight against rape on college campuses, pushing to pass the Campus Accountability and Safety Act. She works across party lines and differences to achieve her goals, making allies of women on both sides of the Senate. Helping to promote legislation to keep college campuses safe, and ensuring that we keep the dialogue going, Gillibrand has become a champion for victims of sexual assault, and she's someone we'll want to keep close and whose work we should celebrate now and in the coming years.

We interrupt your regular programming for an applause break. Please take a moment to send this woman all of your cheers because she deserves them. Temple Grandin, who, in 2010 was portrayed by Claire Danes in a film about her life, is a known activist for the visibility of autism. As someone who lives with autism, Grandin works to help others like her; she invented the "Hug Machine," which applies "deep touch pressure" treatment in order to calm those on the autistic spectrum. A PhD and a professor of animal science at Colorado State University, Grandin is a living inspiration and might as well just take a spot on all of the dollar bills.

Leaving Gloria Steinem off the list is pretty much out of the question. The Ohio-native turned NYC-based activist, writer, and feminist icon has led generations of women to stand up for their rights and to advocate for the rights of others. A recipient of the 2014 Presidential Medal of Freedom, the 81-year-old recently returned from a casual jaunt across the Korean DMZ with 30 other peace activists. And yes, she rocked those aviator shades along the way.

These are just a few of so many living women whose portraits we would love to stamp on our money, but the brainstorm could go on for days. Actually, it probably should. Let's just create more dollar bills so we can put even more faces on them. Just start making up numbers, Treasury. We've got plenty of ideas for representation.