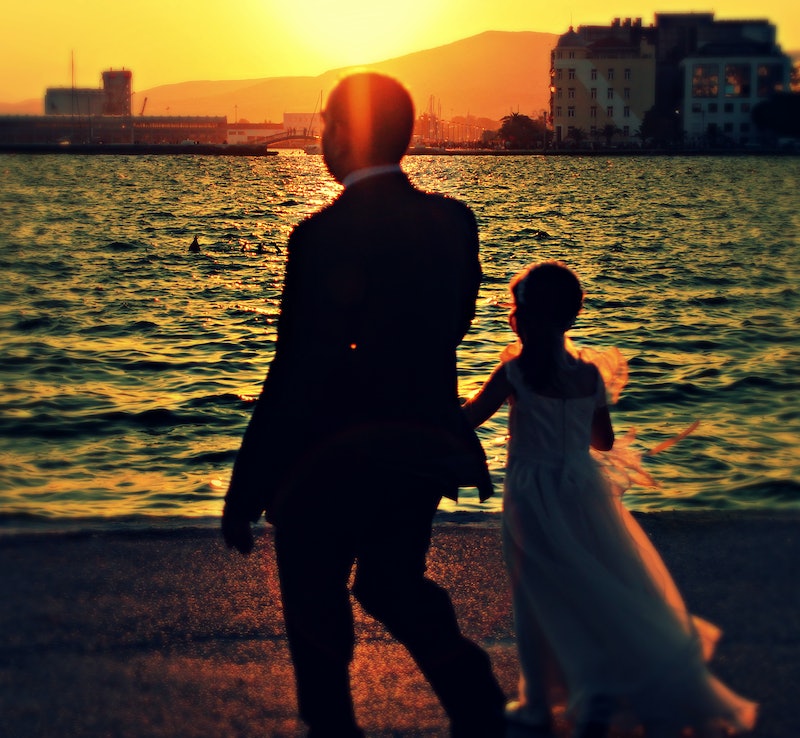 June 21 is Father's Day, which means children everywhere are calling up their dads to say "thanks" and "I love you." Wikipedia defines the word "father" as "the male parent of his and the mother's offspring," but in 2015, the shapes, sizes, textures, and flavors of families are not limited to such rigid definitions. There are families with two dads, no dads, and people who function as father figures outside of the home. And while the definition of what makes a dad is more malleable in American society today, it also takes a whole lot more than just fertilizing an egg to qualify.

Dads, in their many forms, must be present and engaged in the ever-evolving adventures of their kids. They're there for the whole process — the noisy, sleepless, and often muddy process of raising children. Don't take it from me though; check out the DaddyDoinWork Instagram account, a page filled with photos of all types of dads doing the best job that they can.

As the African proverb states, "It takes a village to raise a child," so, which villagers should be recognized in a modern Father's Day celebration?

These are just a few of the people who I think deserve extra recognition this Father's Day. Be sure to wish an extra special day to whichever of these nurturing characters has made an impact on your life.

These are the people who guide us to perform at the highest level. Somehow, they empower us, often as children, to believe that we can achieve great things through hard work and dedication. Teachers, coaches, and other youth mentors all dedicate their lives to imbuing young women with the power to learn, to lean in, and to believe in themselves. From community soccer tournaments to the top of the Olympic medal podium, these master motivators are able to harness our desires to be our best selves.

If you're close with your grandfather, he was probably a pretty great dad himself. Often our first biggest fans, the grandpas of the world are so very important because they teach us about how to be playful even when playfulness is not readily available. According to the American Grandparents Association, 43 percent of grandparents become so in their 50s. Think about how many piggyback rides you received as a kid... and that guy was in his 50s! Grandpas greet us with a, "hello, beautiful," and always know where to get the best malted milkshakes!

I asked my friend Tatiana to describe her feelings about celebrating Father's Day with Chuck, the man who became "dad" after her father passed away when she was young. She said, "For me, it's even more special because it's a role he's earned. I love my dad because he joined my family and filled a role that I needed growing up. I think all fathers deserve accolade, but I want to throw a parade for a man who put up with how obnoxious of a teenager I was for no genetic reason, just love." Happy Father's Day, stepdads! You guys literally earned it.

Gay fathers face all of the challenges of parenthood with an extra load of ridiculous questions from people ranging from the curious to the flat-out ignorant. The most amazing thing, in my opinion, about gay fathers, and gay mothers, for that matter, is that they raise their children with a deep understanding that who you love is a fundamental and beautiful part of being alive.

Gender roles aside, single parenthood has to be insanely taxing. A single parent with more than one kid is automatically outnumbered. They manage to put food on the table and to provide their children with safe homes all while juggling their own work schedules and getting the kids to school. And somehow they still find time to shower and/or sleep. Make Sunday special for a single mom, because she's pulling double-duty, and that lady deserves (at the very least) a top-notch belgian waffle.

More like this
18 Father's Day Poems That'll Make You & Your Dad Tear Up
By Michelle Regalado and Siena Gagliano
Why You're Seeing Green Bandanas At Abortion Rights Protests
By Lexi Inks
How To Come Out Online, According To Trevi Moran
By Melanie Mignucci
13 Summer Solstice Quotes To Celebrate The Longest Day Of The Year
By Sadie Trombetta
Get Even More From Bustle — Sign Up For The Newsletter