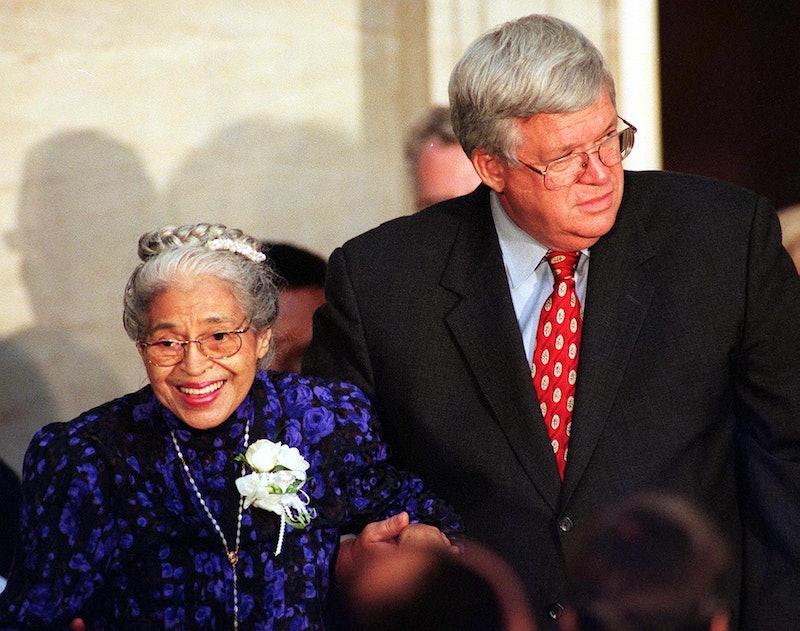 A woman will appear on the $10 bill next to or on the opposite side of Alexander Hamilton, according to an announcement made by the U.S. Treasury Wednesday. This is both exciting and a pain in the butt (Why does the woman have to be feature with Hamilton? Why can't she stand on her own?), but we'll take it for now. Now, the U.S. will be faced with choosing a woman they find was an integral part of American democracy. But why not make the change representative of two firsts: let's put a woman on the bill, sure, but let's make sure she's a woman of color. There's a long list of black women who should be on the $10 as a result of their immeasurable contributions to women's rights, racial equality, voting rights, science and mathematics — the list goes on and on.

Black women are faced with being a part of two minority groups, which means that they are often faced with double the obstacles. They are faced with the pay gap and sexual violence that all women face, but then they are also faced with abhorrent racism against black people and the violence and aggression that often results from it. Their experiences are uniquely difficult and uniquely empowering, and their stories ought to be elevated. There are too many black women who deserve to be on the $10 bill for me to include them all, but here are 6 fabulous choices:

Fannie Lou Hamer is the woman who coined the phrase "I'm sick and tired of being sick and tired," according to The Root. Hamer was born in Montgomery County, Mississippi, and she dropped out of school at the age of 12 so that she could work full time to help her family make money. She and her husband were unable to have children because Hamer had surgery to remove a tumor, and the doctor gave her a hysterectomy without her consent.

In 1962, she attended a civil rights protest meeting, and everything changed. Later that year, she and 17 other people traveled to the county courthouse to register to vote. She was fired from her job for trying to register and, throughout her career as an activist, was threatened, arrested, beaten, and shot at. She ran for Congress unsuccessfully in 1964 and 1965 and was seated as a member of Mississippi's legitimate delegation to the Democratic National Committee in 1968, where she was an outspoken critic of the Vietnam War. She also helped establish National Women's Political Caucus in 1971. She was one of the first people to work on bringing black people and black women into politics in the early '60s.

She studied chemical engineering and Afro-American studies at Stanford University and then attended Cornell University’s medical school. She entered space with six other astronauts aboard the Endeavour on mission STS47 in 1992. Jemison spoke about minority access to the sciences, according to the Roselle Library:

We look at science as something very elite, which only a few people can learn. That's just not true. You just have to start early and give kids a foundation. Kids live up, or down, to expectations.

This one's a no brainer, but how could Parks not be included on a list like this? Parks refused to give up her seat at the front of a bus in Montgomery, Alabama, in 1955 to a white passenger and started a city-wide, yearlong bus boycott. The boycott only ended when the U.S. Supreme Court ruled that bus segregation was unconstitutional. Since then, she has received the NAACP's highest award and the prestigious Martin Luther King Jr. Award. On September 9, 1996, President Bill Clinton awarded Parks the Presidential Medal of Freedom, the highest honor given by the United States' executive branch.

Tubman was born into slavery in 1820 on a plantation in Maryland. She is known as one of the first great conductors of the Underground Railroad, which helped sneak slaves out of slavery. At one point, authorities were offering a reward of $40,000 for anyone who caught Tubman. Over the course of 10 years, Tubman guided roughly 300 slaves to freedom. I'm not quite sure who lives up to the fundamental American dream of freedom better than Tubman. They are pretty difficult — and badass — shoes to fill. She spoke about this determination, according to Goodreads:

Williams was the daughter of an enslaved woman and a free black man in the 19th century. She was the first documented black woman to enlist and serve in the U.S. Army after the Civil War. She worked as a laundress and cook in the Union Army, according to the Root. But, because life as a black woman in the 1860s was pretty scary, she posed as a man to protect herself and get better work opportunities. (Talk about sticking it to the man.) She went under the name William Cathay and enlisted in the 38th U.S. Infantry. She went on to become a black female buffalo soldier who played a major role in the peaceful settlement and development of the American West.

Chisholm was born in Brooklyn, graduated from Brooklyn College in 1946, and then earned a master's degree in elementary education from Columbia University. She's most well known for being the first black woman elected to Congress. She served for New York in the House of Representatives for seven years, and she was also the first major-party black candidate to make a bid for the U.S. presidency. She fought for educational opportunities for minorities and social justices causes.

In a 2005 interview with the Associated Press, Robert E. Williams, then-president of the NAACP in Flagler County Florida, described Chisholm: "She was our Moses that opened the Red Sea for us." William Howard, Chisholm's longtime campaign treasurer, said she cared very deeply for the people she represented, according to Biography.com:

Anyone that came in contact with her, they had a feeling of a careness, and they felt that she was very much a part of each individual as she represented her district.