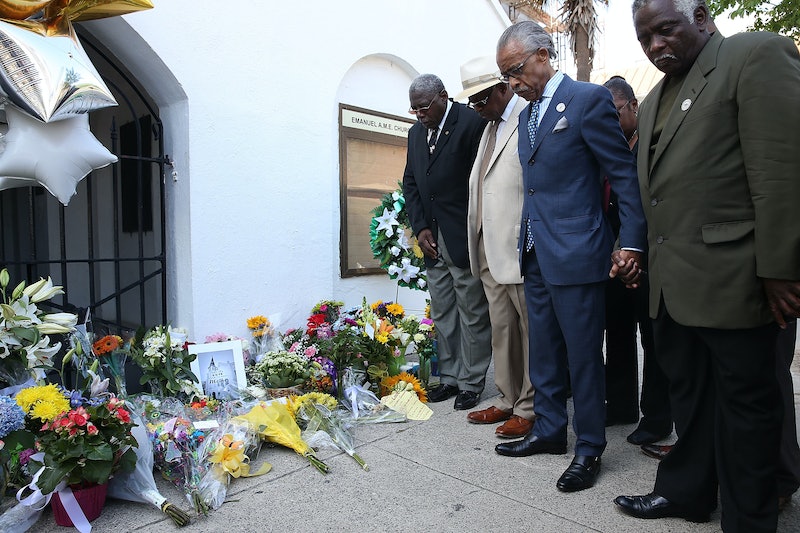 As the details of the tragic church shooting in Charleston, S.C. continued to unfold Thursday, officials released the names of the nine victims who lost their lives. Authorities said Dylann Roof shot and killed Sanders and eight others as they sat in a Bible study group in Emanuel African Methodist Episcopal Church on Wednesday night. So who was 26-year-old Tywanza Sanders, the youngest victim of the horrific attack?

Sanders was a recent graduate of Allen University in Columbia, S.C., where he had received a business degree. He had worked in a barbershop, with dreams of opening his own shop one day, The Wall Street Journal reported. According to Mashable, Sanders posted a Snapchat of the Bible group not long before police say Roof opened fire.

His Facebook page has dozens of smiling selfies and inspirational quotes, including one that appears several times which is particularly heartbreaking now: "Your Dreams Are Calling You." He was also an aspiring rapper and went by the name Fresh Wanza on Soundcloud, where he had several songs listed, including "What's Wrong With Just Being Black" and "Poetic Justice."

Allen University released a statement calling Sanders "a warm and helpful spirit," who was "committed to his education." Sanders posted a final inspirational quote, from baseball player Jackie Robinson, on Instagram the day he died.

Sanders' friend since middle school, Rahiem Burgess, told the Wall Street Journal that he would miss his friend's positive outlook and warm smile. "It was one thing I can count on Tywanza to always be inspirational."

The New York Times reported Sanders saw Roof take out the gun before he began shooting and stood in the way to protect his aunt, Susie Jackson, who also was attending the Bible group. Relatives told the Times Sanders tried to persuade Roof to put the gun away.

Family friend Torrence Shaw told the Times that Sanders was ambitious and was planning a career, but had a gentle, sensitive personality that belied his age. "For him being so young, he was wise. He was always caring and would give the shirt off his back to anybody. He was the first person I would always call to get his wisdom and advice."