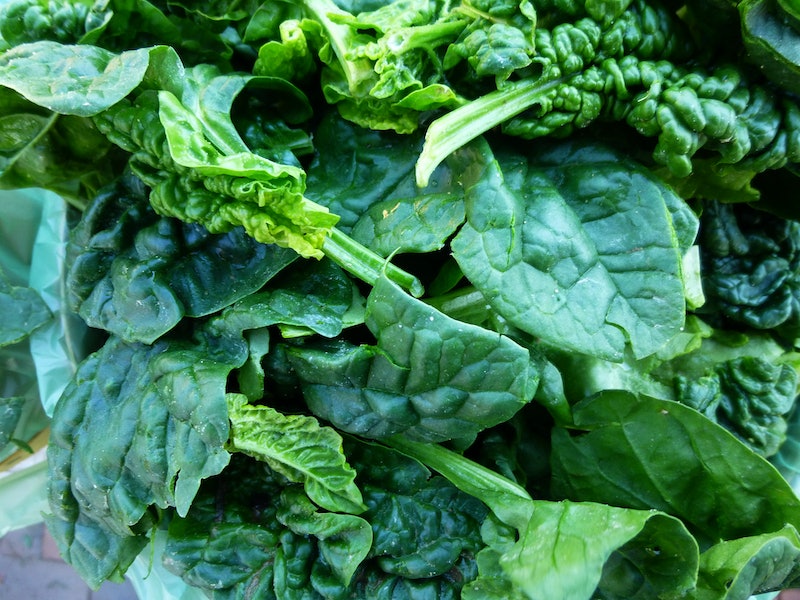 What do you do when PMS symptoms hit? Most of us are accustomed to reaching for over-the-counter painkillers like Advil, which are all right for minimizing cramps — but not so stellar for other PMS issues. But there are natural ways to deal with both period pain and other symptoms simultaneously. No, we don't mean Netflix and wine and nachos (though those obviously can't hurt). Science has shown that stocking up on the following vitamins and minerals may just make your next a lot less miserable.

Iron is one of several minerals that may help ease PMS symptoms. A 2012 study from the University of Massachusetts Amherst found women who ate iron-rich diets were about one-third less likely to experience physical and emotional PMS symptoms — as long as the iron came from non-meat sources. Good vegetarian sources of iron include spinach and other leafy greens, pumpkin, sesame seeds, dried herbs, lentils, beans, sun-dried tomatoes, and raw cocoa (or supplements). Though the recommended daily iron intake for women is 18 milligrams daily, less PMS was only seen in women who consumed more than 20 milligrams daily, and the lowest risk was seen in those getting almost 50 milligrams of vegetarian iron per day.

In the same University of Massachusetts study, zinc was also found to hep ease PMS symptoms (though not as much as iron). The effect was seen in women getting at least 10 milligrams of zinc per day. To get the range of minerals important for menstrual cycle health, lead researcher Elizabeth Bertone-Johnson said "women should consume a balanced diet, and if they're not getting enough nutrients from their diet, they should take a multivitamin."

If you get severe menstrual cramps, you may want to boost your vitamin D intake. In a 2012 study published in JAMA Internal Medicine , 20 women with a history of painful cramps were given high doses of vitamin D five days before their expected periods. Three-quarters of the women reported having less painful periods than usual, as well as less need to take nonsteroidal anti-inflammatory drugs (like Advil and Aleve) for the pain. Vitamin D is hard to come by in food sources, however — our bodies produce it from sunshine — so you may want to consider a vitamin D supplement (or go outside more!).

This vitamin inhibits the body's synthesis of prostaglandins, which are thought to be one of the major causes of period pain. According to a 2005 study published in the British Journal of Obstetrics and Gynecology , even low doses of vitamin E (200 IU) can cut both period pain and blood loss when taken just before and at the start of your menstrual cycle.

A number of different B vitamins have shown useful in reducing PMS pain. A Danish study published in Nutrition Research found that a combination of B12 vitamins and omega-3 fatty acids could substantially reduce menstrual cramp pain. And according to another review, vitamin B1 (aka thiamine) is also effective at reducing cramp occurrence and severity.

According to the University of Maryland Medical Center, other healthy habits and natural remedies may also help ease PMS symptoms. Meditation and exercises such as yoga and tai chi may be effective for easing cramps and pain. And there's some evidence that calcium, antioxidant, tofu and water intake and cutting back on refined carbs might help.