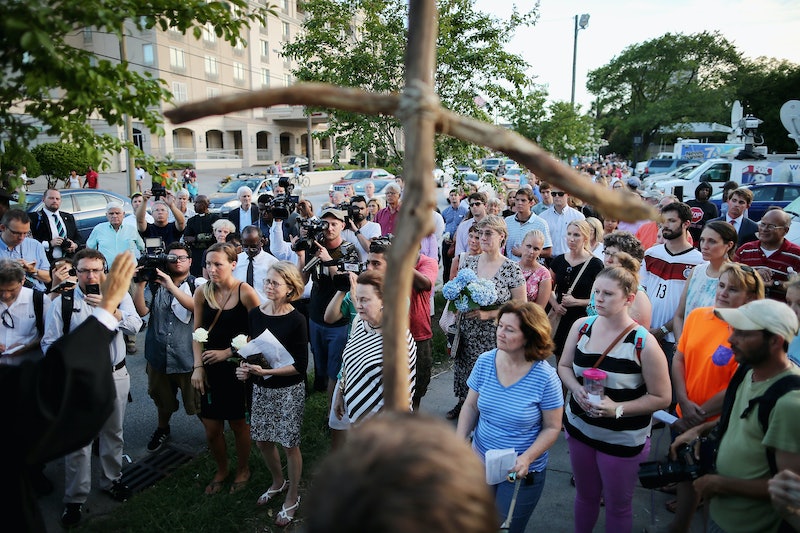 Among the victims of the shooting at Emanuel AME Church Charleston, South Carolina was Sharonda Coleman-Singleton, a pastor and mother of three. But who was she? The 45-year-old mother and teacher was a reverend at the historic church in Charleston where nine members of the congregation lost their lives on Wednesday. Though Coleman-Singleton was a speech pathologist by trade, she also dedicated her time to the church, as well as serving as the girl's track and field coach at Goose Creek High, where her eldest son attended school.

Before going on to coach high schoolers, Singleton-Coleman ran track and field herself while attending college at South Carolina State University. She graduated in 1991 with a degree in speech pathology and audiology, before returning home to New Jersey to complete a master's degree at Montclair State. After receiving her degree, she worked in several schools in Georgia before taking a position at Goose Greek High School in 2008, where she quickly became a prominent member of the community.

“She was a bulldog when it came to her kids," Principal Jimmy Huskey told The Post and Courier. "She cared about her kids. She was a true team player, but she always wanted more for her kids, and I admired her for that.”

But her dedication to her students did not come close to her love for her husband Chris and their three children Caleb, Chris, and Camryn, friends said. Singleton-Coleman's eldest son Chris, a sophomore baseball player at Charleston Southern University, posted an emotional goodbye to his mother on his Instagram on Thursday, saying "I always told you that you went to church too much. You would laugh it off and say 'boy, you can never have too much of the Lord."

"You were a better mother than I could have ever asked for," Singleton-Coleman's son continued. "This has truly broken my heart in every way possible.”

Other family members have spoken out about Singleton-Coleman's love for her family, including her cousin Constance Kinder. “Sharonda was pretty on the outside and just as beautiful on the inside — the one thing I know for sure she loved the Lord so she was where she enjoyed being," Kinder told Buzzfeed News. "She was only 45 years old, she still has three kids to raise.”

Members of the community were invited to remember Singleton-Coleman's life and efforts during a vigil held in her honor Thursday night at Goose Greek High School.

More like this
What Is Happening With Sheku Bayoh’s Case?
By Sophie McEvoy
The Most Powerful Photos From The Weekend’s Abortion Rights Protests
By Melanie Mignucci
'Line Of Duty's Writer Just Dropped A Bombshell About Steve & Kate
By Catharina Cheung
Jurnee Smollett’s Heart Is Healing
By Rebecca Carroll
Get Even More From Bustle — Sign Up For The Newsletter